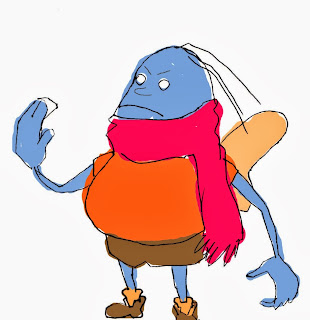 This was provoked by a recent stay at the birthplace of Stanley Henderson (or, more correctly, the place of his conception). No, don’t Google him. That's him on the left, drawn by my nephew, Joe. I’ll explain.

I’ve written some stories about and, for me, he’s taken on a life of his own. I ought to be treating him as a commercial proposition, and I will, of course, but even as I do so, he’ll be there as a presence, casting a sceptical eye over and shaking his head at my efforts.

Regrettably, my grandchildren are growing up faster than I am but I’m talking now about the days when story ideas were generated, with apparent ease, by the early morning arrival of grandchildren in our bed , bright, wide-awake and wanting to be entertained. If I was clever, I could get them to do their own inventing (such as when Tracey the lion took the part of Goldilocks in Tracey the Lion and the Three Giraffes), but sometimes, a riff would start and it would easy for me to pursue it.

Stanley started as one of those. It was about the same time as I started describing the life and family of a giant about whom I can’t remember much now except that his wife played rugby. That family and more importantly, Stanley, grew from a technique I’ve mentioned in other contexts – that is, putting together things that are not normally associated with one another, such as blackbirds with vertigo.

So that morning, we were talking about fairies and, in order to provoke my two listeners, I said that some of them were different from the dingly dell, sparkly, Disneyesque creatures which were so familiar in their books. They wanted examples and, starting from the premise that not even the greatest optimist in the world can be happy ALL the time, I suggested that there were miserable, grumpy fairies. And, as the demands for more detailed explanations continued, the figure of began to form. He was everything fairies aren’t – male, with an unfairy name, a predisposition towards melancholy and a pathological dislike of every normal fairy association. Being such an outsider, he was also pretty aggressive in defending his chosen status, and, as a result, the person in whose bedroom he lived (i.e. me aka Jack), had to be extra-tolerant and all the things wasn’t, and the two became a double-act.

This all sounds too analytical and too deliberate. In fact, it was just me answering questions about this creature who, as more details emerged, took over so much that it was obvious that he would refuse to tick any of the usual fairy boxes. But why, when I got back home, did I bother to write a story about him? I’ve no idea. Tracey the Lion and the rugby-playing wife of a giant didn’t get their stories written down, so why ? Maybe it’s because, having established him as a ‘person’, I was tempted to put him into various contexts to demonstrate his differences. And, once the first story was told, several others suggested themselves. So far, there are eight of them. The first, Stanley Moves In, is in fact the most recent one. I wrote it in response to a friend's query (based on what she knew her two young sons would ask), about how came to be living in my (Jack’s) bedroom.


But who are they for? What’s the age range of the target readership? That should be easy, but makes sure that it’s not. It’s obviously for kids from maybe five to ten, but friends who’ve read them suggest that, in a lightweight way, he’s attractive (if that’s the right word) to adults, too. (And it’s true that, when he goes on holiday to , a French counterpart - a sort of Cartesian fée - does ‘explain’ his condition to him in ‘philosophical’ terms.)

But all this ‘explaining’ does nothing but make the whole thing sound pretentious and planned. I haven’t written this way about any of my other books, so why write about a kids’ story? I think because, the ‘reality’ for me of such an unreal character demonstrates again what a strange business writing is and what a perverse pleasure we get out of it. It doesn’t matter that it’s a ‘trivial’ story for ‘kids’ – for me it’s as absorbing to get involved in as any ‘serious’ stories. We make our worlds, we make other people and other things, and they’re as much part of our reality as the feel of the keyboard under my fingers now. , like my figurehead carver, my policeman, or my murder victims, is a fact. Of course I don’t believe in fairies, but I believe in .
Bill Kirton children's books Fairy stories the 'reality' of characters

John A. A. Logan said…
Another great thing is that you never know how far these things can grow, Bill.
Watership Down grew out of Richard Adams telling stories to his children to occupy long car journeys...
Stanley looks like he's got a bit of mileage in him!
7 January 2014 at 05:26

Susan Price said…
Great illustration from your nephew, Bill! - Hope to see and read more of Stanley.
7 January 2014 at 10:09

Lydia Bennet said…
yes grumpy fairy is a great idea, and deffo has legs (or wings). I believe in him already (I've never quite stopped believing in fairies, deep down).
7 January 2014 at 15:19

julia jones said…
I'd love to tell my grandchildren about Stanley - is he in printed form?

Bill Kirton said…
Sorry to be so long replying, all, but we've been in Paris bolstering the French economy by spending copiously on wine and food.
Thanks for so many nice comments about Stanley. I need to get Joe working on the illustrations because the texts are all ready and I'd really like to see him in both ebook and paper book forms. The technicalities of formatting illustrations for the various Kindles seem a bit scary but I like him so much that I'm going to face them. I may, though, be calling for help.
17 January 2014 at 11:27