Things to Understand on Being Accepted for Publication by Lev Butts

Almost three years ago, I wrote a post on when self-publishing might be inappropriate. In it, I discussed a recent project, a critical edition of H. P. Lovecraft's work, that had been passed over for publication by a university press and my reasons for not self-publishing it.

Since that post, two of my fiction works, Guns of the Waste Land I & II, have been picked up by traditional (though small and independent) publishers and been released professionally. My collection of short stories remains self-published but continues to receive good reviews. But for the longest time, my Lovecraft book has remained in acceptance limbo.

That is, until last year, when McFarland accepted my manuscript for publication. Yesterday, as I was surfing the digital aisles of Amazon, I stumbled across this offering. It was the first I have heard of an actual publication date and a nice start to my birthday weekend.

It's been a long journey to get this book to publication, but I have learned three things that may be of use to others who are being traditionally published for the first time:

You probably won't get to keep everything in your book.

Books are expensive to produce. If you've ever self-published a book through sites like Createspace or Lulu, you know that the biggest cost sink is the number of pages your book has. As a self-publishing writer, though, you get to decide if the high cost is worth keeping all the material in the book or if it might be better to trim some fat and save your audience money. After all, these platforms are print on demand; you don't have to dish out your own money to put books on the shelves.

Traditional publishers, though, have to physically print copies to send out to marketing venues. They have to, then, decide for you whether or not the cost of printing is outweighed by the value of the material. If they determine your book is too long, be prepared to attack it with a paring knife. 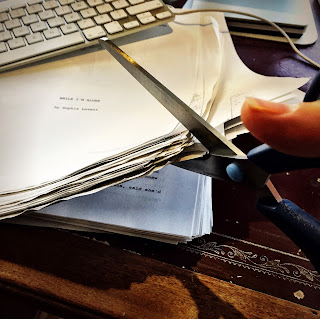 While Guns made it safely through this editorial gauntlet, the Lovecraft book was not so fortunate. I was, though, able to keep all of the Lovecraft selections, except for one. All of the short stories and poems were fine. However, I had to drastically abridge his monograph Supernatural Horror in Literature (which actually made the essay more user friendly for undergraduate students I think), but his novella, At the Mountains of Madness, proved far too long to make the manuscript cost effective for the publishers and thus had to be excised in its entirety.

You may have little say over the title of your book.

Publishers spend a lot of money on market research. This is a good thing: Understanding what is selling in a given market helps you to decide the best way to advertise your product in such a way as to appeal to the most people.

Surprisingly enough, the title of a work is considered one of the most important advertisements a book (or film or album or television series) has. When you think about it, though, it makes perfect sense. Imagine Catch-22 with the title The Bombardier Who Doesn't Want to Fly Anymore or To Kill A Mockingbird as Racists Always Win.

Oddly enough, though, for an academic book, a more descriptive title will often draw more people than a more creative one. Thus my working title for the book, Fear of the Unknown: An H.P. Lovecraft Critical Edition became H.P. Lovecraft: Selected Works, Critical Perspectives and Interviews on His Influence.

You have very little control over the cover of your book.

This is perhaps the best part of traditional publishing at least to me. Despite the old adage about books and our judgment of covers, your cover art is perhaps the most important advertising for your book, more so even than the title.

I hate designing my own covers. It's one of the reasons I like Createspace's and Lulu's cover templates. In addition to marketing departments, traditional publishers also tend to have art departments whose sole job is to design covers that adequately convey the plot and/or tone of your book to the public. If you're lucky, you may get the opportunity to suggest elements of the cover, you may even be given a choice of covers to select from, but more than likely, that decision is going to be made by people who have devoted their art degrees to getting paid good money to trick people into thinking they cannot live without your book.

And they do a good job, too. Consider the following covers for Guns of the Waste Land. Can you guess which one was done by a professional? 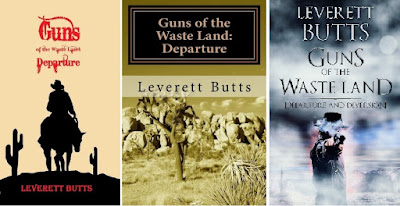 I was immensely proud of that first cover when I made it. After making the second cover, however, I realized how juvenile it looked. And while the second cover is clearly an improvement, it has all the markings of a stock-cover (which it kind of is: stock template and a googled image of a Joshua tree). The third one, however, created by Venture Press' art department is clearly the superior. It has depth, the title literally seems to fly off the page, and the colors draw your eye in. In short, it looks like a cover created by someone who knows how.

If I had been in charge of designing the Lovecraft book, it probably would have looked something like this: 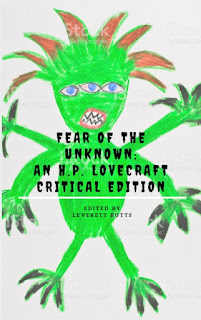 Instead, McFarland's art department came up with this: 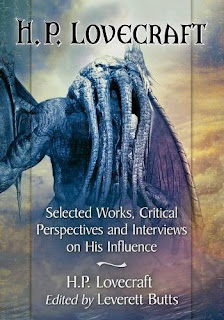 So that's what I have learned from working with traditional publishers. Hopefully, it is helpful to you. Either way, my Lovecraft book is out in 2018, probably February.
Posted by Leverett Butts at 00:00

Very interesting. Out of the 11 books I have had published by the traditional route, 6 kept my title and 5 had it changed. Despite being an illustrator, I have only once been allowed to design my own cover, although I have occasionally been asked for my input. Three of those books were written for a specific series, so the word count was decided beforehand. But otherwise, I have never had anything cut for length, only for good editorial reasons. incidentally, I guessed which was the professionally-designed cover straight away!

Interesting post. When my first book was published the publisher didn't like my title and after circulating three possible replacements they decided on a fourth title with no reference to me. Likewise, I had no input to the cover other than they sent it to me saying 'this is the cover'. As for word count, at the editing stage, I was instructed to lose 7,000 words! Now I am perfectly happy making my own decisions as an indie. And, as a matter of interest, I actually make more money as an indie than I ever did when I was traditionally published.

Because I'm with a small independent publisher, I've never been asked to change a title, and have always been consulted about covers - although I've also been given very sound advice that I've been happy to go along with. I think it's probably a very different experience with the big corporations. In fact I know it is, having had one disastrous experience early on in my career. As far as cutting goes - only for good editorial reasons and then only tweaks. But with agents, in the past, I have been asked to delete the first and last thirds of the same book by two different agents. I suspect they are often the worst culprits since they have to 'make their mark'. In that case, I did neither and don't currently have an agent!