By Elizabeth Kay - April 17, 2014
Oh, it happens, and it’s horrible. It’s like being in a maze when you can’t find the way out, and you keep passing the same point over and over again.
Nine times out of ten there will be something wrong with the last section you wrote. There could be any number of issues here, but usually it’s just one, especially if you have an idea of where the plot is going. You need to re-read what you’ve written, as objectively as possible. This means making a note of the timeline – can everyone get to where they’re meant to be in the time you’ve given them to do it? It may mean making a map of the terrain. 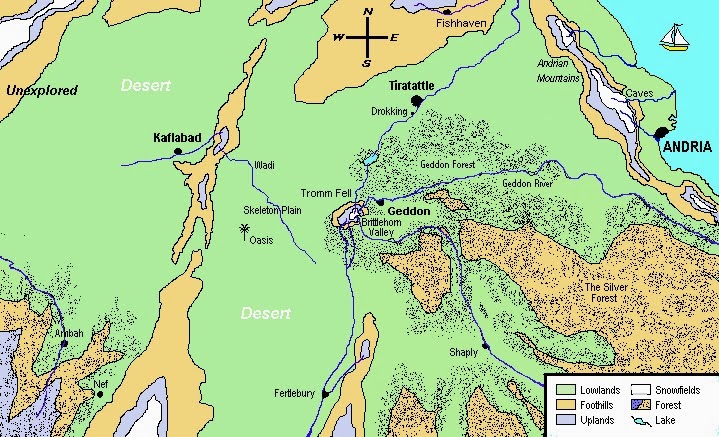 Are the characters in the right places? But the most likely glitch of all is that someone has behaved out of character. They simply would not have done or said something or other. Have a good hard look at each character, and the motivation for their behaviour. People (or animals, or mythical beasts!) don’t do things for no reason.

Some characters seem to come from nowhere. Others have a starting point with a real person, but very quickly become themselves. If a character stays too close to someone you know, you’re always thinking, so-and-so wouldn’t do/say/ think that. The character must always serve the story, rather than the other way round. But yes, a few of the more eccentric characters in the Divide

books were inspired by real people. The person you know better than anyone else is, of course, yourself – so you use aspects of yourself quite a lot as well. The adventurous bit of me went into the elf Betony, the indecisive bit into the sinistrom Grimspite, and the rebellious bit into the gryphon Fuzzy. I also think there’s a lot of acting in writing. I imagine myself as my characters, and try to see things from their point of view. It can be a bit embarrassing if I’m walking down the road being Ironclaw, and flapping my wings to a raptorial song…

Once you’ve isolated the problem, dealing with it can be agonising. There may be a piece of writing of which you are particularly proud, but if it doesn’t further the plot/develop the character/expand the theme, it has to go. Everything you write has to be there for a reason – better still, all three of the reasons I’ve mentioned above. You should be able to defend every single sentence if challenged. So – have another look at the last section you wrote, and be prepared to simply cut it out, go back, and re-write. The tenth reason is that you've over-planned it, and nothing comes as a surprise any more. Synopses are all very well, but they can kill something stone-dead. I need what I'm writing to be an adventure for me, too. If that's the case, change something. Raymond Chandler would have a man burst through the door with a gun in his hand… Another method is top open the dictionary at random, shut your eyes and stab, and then try to incorporate the word in the next sentence. If you do it three times you nearly always come up with a completely new slant.

Fictional ideas are re-combinations of experiences you have already had, so the more places you go and the more things you try, the more likely you are to come up with ideas. I usually start with a setting, and I’ll use the places I’ve visited to inspire me. Sometimes I actually go somewhere to find out more – I went to to research things for the third book, Jinx on the Divide. The setting came in very useful later on for Ice Feathers, even though I had to re-imagine it for prehistoric Antarctica. I try to build up a mental bank (as well as photos!) of places that I've been, and I sometimes return to them in the same way that I use random words to get me out of a plotting hole.

Although I know how a book is going to end when I start it, I don’t always know how I’m going to get there, or who I’ll meet along the way. It needs to be an exciting journey for me too. The people who tell you to summarise before you start may never have written a book themselves. Sometimes I write really quickly, but there’s no rule – the first draft of The Divide took three and a half weeks, as I became obsessed with it, but the third book took lot longer as I had to check everything against the things I’d said in the earlier two books.

There are several of my books that have been completely re-written when things got sticky. Fury

started life as a book called The Crack, long before crack cocaine became a household word. It ran to 72,000 words, and was for adults. The problem was that the main character was a teenager. When I finally realised this I re-wrote it as a teen book, at 40,000 words. It still did the sticky thing every so often. In the end it was published by Barrington Stoke for reluctant readers at 11,000 words, and was a much tighter job altogether! Beware of Men with Moustaches had over twenty thousand words cut to make it fit into a series of novellas by different people which, in the end, the publisher decided to cancel.

And sometimes there’s just too much going on in your life to devote the sheer energy required to do the necessary. Currently I have three books that need surgery. I know what has to be done to each of them, but getting round to it is another story… and it’s always much easier to start a new one than it is to go back and tackle creaky nuts and bolts.

Susan Price said…
Should this go on our technical advice page? It's full of such good advice, I'm inclined to think it should.
17 April 2014 at 10:24

Bill Kirton said…
I agree, Susan, it's a very insightful piece. And I love the idea of the random dictionary trigger. I'll be trying that.
17 April 2014 at 11:41

Dennis Hamley said…
A great account of the writing process which rang so many bells which I recognise. Yes, I too try to imagine myself as my characters and sometimes privately act them out. Luckily for me I stick mainly to human beings and have never been drawn to mythical creatures, though have no difficulty with anthropomorphising hares and cats because they're pretty well human already. At least, mine are. But I draw the line at trying to move like them.
17 April 2014 at 12:29

Pauline said…
Good, helpful piece - thanks! I particularly liked your comment that it should be an adventure for you too - when I write, that's exactly what it is. I settle down to see what's going to happen next, just the same as when I'm reading. Of course, I'm not a proper author, just writing for fun, but I wouldn't want to write at all if it was carefully planned, like a building job! Thanks for the advice.
17 April 2014 at 18:28