By Mari Biella - April 02, 2014
Alexander McCall-Smith was taking part. So too, according to some tweets, was God Himself. Well, if it's good enough for McCall-Smith, not to mention the Almighty, it's certainly good enough for me. So I put on my thinking cap, powered up my laptop, and took part in the 2014 Twitter Fiction Festival, which ran from March 12th-16th. 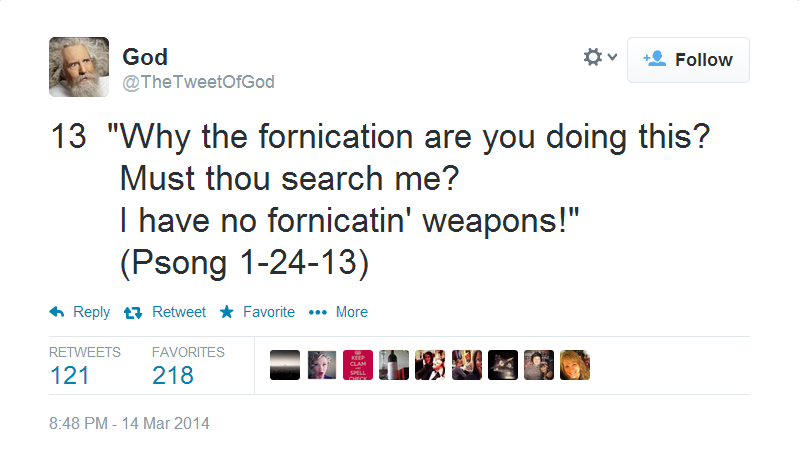 For those not in the know, the Festival brings together writers, poets, humorists and even nobodies like me for a common purpose: namely, to write stories of 140-or-fewer characters and tweet them, together with the hashtag #twitterfiction. It was open to everyone, and it looked like good fun, so why not?

The mere mention of Twitter fiction - or "twitterature", as it is apparently known (oh dear) - may be enough to bring on palpitations in literary purists. Isn't the process of tweeting the diametric opposite of the careful composition and crafting of a fictional work? Isn't Twitter itself the illegitimate child of the modern desire for instant gratification and minimal effort? Well, perhaps; indeed, there was a time when I myself would have thought much the same. But taking part in the Festival, albeit in a very small and humble way, has changed my mind.

Literary purists would no doubt be further dismayed upon learning that not even writing one's own fiction was strictly necessary. The creatively challenged could make use of a Twitter fiction generator to help them churn out random stories. I generated a few myself, to help get my creative juices flowing. And you know what? Some of the results were actually pretty fantastic, in a weird sort of way. Like this fabulously surreal vignette, for example: 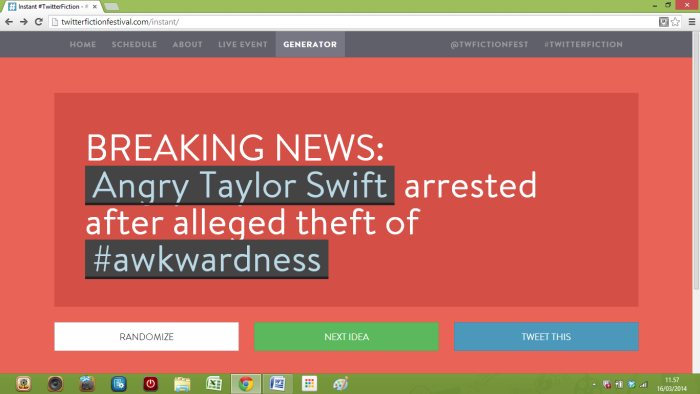 All great fun, of course, but someone who likes to think she's a writer can hardly keep on relying on generators. So, with my mind now geared up, I had a shot at producing my own, um, "twitterature". I didn't produce much, admittedly, because I was running a little short of time, but it was an interesting experience anyway.

And the results, from what I saw of them, were interesting too. I doubt that "twitterature" will be taking over from more established forms any time soon, but some writers managed to come up with great little snapshots of action, emotion and observation. What I did find, however, was that just as "twitterature" forces writers to work harder, so it also challenges readers. When the writer is so constrained in terms of what he or she can actually write, it's up to the reader to fill in the gaps. This, apart from anything, is probably why the novel's supremacy will go unchallenged for the time being.

To demonstrate, one of my own contributions:

Is the situation sinister, farcical, or just a bit sordid? Is the missing brother lying in a shallow grave, or just lying in bed nursing a hangover? That's for the reader to decide.

Also asking questions of the reader is this one:

What has happened in this quiet rural area? Why can nobody understand it? Is it the ineffable nature of death itself, or something else, something deeper? (This story was selected to be featured on the Festival website - somewhat to my surprise, given that I'd tapped it out in about thirty seconds, for fun.)

Writing a story that does not exceed 140 characters is an interesting writing experience; if nothing else, it forces you to get to the point. Besides, coming up with these tiny micro-stories forced me to ask questions that probably would not even occur to me normally. What exactly is a story? What exactly does it take to tell a story? Even the things that we normally agonise over - development, structure, characterisation, choosing le mot juste - become still more tricky when you're so constrained. It forces you, perhaps, to pare a story right down to its bare minimum - a valuable exercise when, like me, you're given to purple prose. So it was certainly a worthwhile experience, and one that I'm looking forward to repeating next year.

What are your thoughts? Is "twit lit" a worthy new literary form, or a sign of just how far we have sunk as a culture? Can a story really be told in 140 characters? Can you think of a better term than "twitterature"? All comments welcome.
Alexander McCall-Smith Twitter Twitter Fiction Festival

CallyPhillips said…
Interesting. Your stories read like 'logline' pitches - in screenwriting world one is expected to encapsulate the whole movie in a sentence to 'grab' the producers! So... I'm guessing those good at tweeting will be the next movie makers?! And may explain why I can't DO twitter. I was crap at loglines too. Nice to see another 'virtual' festival though, maybe people will cotton on a bit more easily to the concept behind the ebook festival this year instead of wondering why we aren't all in a room drinking coffee together!!!

Bill Kirton said…
I understand your reservations about indulging in 'twit lit', Mari, but working under constraints, however artificial they are, can be liberating. The straitjacket of the 3 unities helped Corneille and Racine to produce wonderful poetic drama, and writers in the Oulipo movement invent excruciating restrictions to force them to create within seemingly impossible limits. Anything which forces us out of our comfortable writing ruts is potentially useful. (By the way, your examples show what a good job you made of the exercise.)
2 April 2014 at 11:18

Lydia Bennet said…
I'm all for experimenting with new forms, and imposing limits can liberate aspects of writing and art in unexpected ways. it'll be interesting to see if this form can develop - intriguing as some of these are, as Cally says they do often read more like teasers or pitches for the novel which lies behind them like a ghost. It seems writers are using what's said to suggest untold stories, but perhaps a whole story could be told this way though I can't at the moment think how.
3 April 2014 at 10:32