BOOKBUB EXPERIMENT 4: KINDLE COUNTDOWN DEAL by John A. A. Logan

Having made several thousand dollars profit last year from a series of Amazon Kindle Select free promotions, and three Bookbub promotions, I had been waiting for a chance this year to combine a 99 cent Bookbub promotion with a Kindle Countdown Deal for my novel, The Survival of Thomas Ford.

On 24th March, Bookbub sent The Survival of Thomas Ford out to their thriller subscription list.
I combined this with a Kindle Countdown Deal ad which ran on the Kindle Book Review site on 25 March; also, a Kindle Nation Daily Special Sponsored Post Triple Play ad which ran on 26, 27, and 28 March; and a Bargainbooksy ad and mail-out to their thriller subscription list which ran on 27 March.
This involved an outlay of $625 for advertising in total, which, although it was a relatively small percentage of the profit made from last year’s promotions, was still the most I had spent on advertising for one promo to date, so there was a degree of nail-biting involved.

Soon, though, the sales had passed the 1100 mark, and the book was steadily beginning to work itself into further profit, having paid for the ads in full, as the Kindle Countdown Deal was letting me keep 70 per cent of royalties, instead of the usual 30 per cent for a 99 cent book.

At the end of day one of the promo, The Survival of Thomas Ford had reached number 70 in the Top 100 bestselling paid Amazon USA Mysteries and Thrillers chart, with Stephen King just above at 67, and Lee Child just below at 73:

Simultaneously, The Survival of Thomas Ford was the Number 17 bestseller in paid US literary fiction, just below Isabel Allende at 14, and just above Khaled (The Kite Runner) Hosseini at 23: 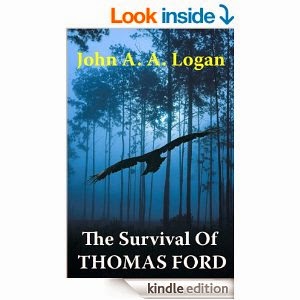 The Survival of Thomas Ford’s peak position during the promo was at number 7 in paid US psychological literary fiction, while Donna Tartt’s The Secret History was at number 8, Yann Martel's Life of Pi was at 17, and Julian Barnes’ The Sense of an Ending was at number 30:

New reviews came in too, until the 145th review had popped up on Amazon US:

“I truly enjoyed this book. It becomes almost mesmerizing to watch the ever widening ripples caused by a bad decision- and there are several bad decisions made in this story.
This is not a book for the faint of heart. There is violence and, in my opinion, true evil here. Some of the characters are both victims and aggressors. That is part of why I found the story so fascinating- the kindest person may still be guilty while the most evil person is dead set on protecting the people he "loves". If you're looking for something with little or no gray areas it won't be here."
5 out of 5 stars, BirdieTracy

“Intriguing…This book was absolutely mesmerizing. I couldn't stop reading it. The characters were so well drawn and I have fantastic visual images of all of them that carried me thru the book. I felt as tho there were times that I was looking right into the face of evil in more than one of the characters. The book was fast paced, well thought out, and moved with a rapid pace right up thru the end. It was not tied up in a neat little bow and I was left to decide for myself what happened to some of the characters. Certainly not an uplifting book but some goodness did shine thru. I would definitely recommend the book.”
4 out of 5 stars, Omoni "koreamom"

“An engaging and well written book…I couldn't put this book down until I finished it. I really Loveliked the mystical touches, especially the white butterfly.”
4 out of 5 stars, Kindle Customer

“Very good, but very different…this was a well written story with interesting and well developed characters...the characters all were many dimensional, finding yourself with pity for the characters you hate, some dislike for the characters that you like...it makes you feel, and it stays with you after you close the book, which in my opinion are all signs of a really good book.”
5 out of 5 stars, StaceyN

Thanks very much to everyone who downloaded and left reviews!

...And the Kindle Countdown probably stirred some concomitant interest in Agency Woman, did it not? You also got quite a few sales of that one and some after sales too. Oh, and one or two sales of Storm Damage.

I'm not sure that Life of Pi is by David Mitchell...! In fact I'm sure it's not. That's Yann Martel.

Yes, Aine, that's true, the "side-sales" and "after-sales" of these promos have to be taken into account, too, to get a true picture.

Thanks, Nick, I've fixed/updated that now! (Apologies also to Mr Martel...his name was right in front of me on the book cover, the staring Tyger must have discombobulated me - His name I do know, Richard Parker!)

John, your timing is perfect. Rodney Walther was just talking about doing Bookbub with Kindle Countdown. I finally just got accepted for a Bookbub promo for PROSPECT OF MY ARRIVAL so I will get the Countdown synchronized. Thanks for sharing!

Thanks, Dwight, All best with the PROSPECT promo (I started the clock on mine at 1AM on the Bookbub ad day, in US and UK...felt that was early enough to synch safely with the Bookbub ad starting 7 hours or so later. Some people start the clock a day early, for safety, but I didn't want to lose a day of Bookbub downloads potentially!)

interesting info John, glad it's working out so well for you. You've got so much mileage from one book, it's amazing - you should run courses in marketing!

Thanks, Lydia (mustn't do that, though, it sounds like really hard work!)

An interesting post, John but not all authors have $625 to spare. I have heard of some authors spending thousands though.
Thanks for sharing.

Thanks, Jenny, that's a very important point.
Yes, I would never suggest that authors spend anything on advertising, personally, unless it was clear profit made from earlier ebook sales.
More data on that was in my earlier Authors Electric posts, Bookbub Experiments 1-3, which are still in the archive here.
In early 2013, for example, I was spending money on advertising, which had come from clear profits in 2012 from ebook sales.
And in 2012, my first year of epublishing, I paid for no advertising at all.
Another important principle (as I see it) is to spend only a relatively small percentage of earlier profit, on future advertising.
So far, that's how I've done it anyway, with $625 being the highest spend for a single promotion to date...and I took 27 months to carefully work up to that.

Great post, thanks for explaining how that all worked. Very helpful! Loved Thomas Ford, by the way. I could not stop reading it and was sorry to see it end. Can't wait for you next (there will be one, yes?).

Thanks very much, moneysmith, really happy to hear you enjoyed Thomas Ford as much as that!

(I have a story collection on Amazon also, called Storm Damage)

How did I miss Agency Woman?? Off to get a copy right now. Thanks for the heads up!!

Thank-you, moneysmith!
I hope you enjoy Agency Woman, too!