Self publishing: Are you experienced?

By Nick Green - April 03, 2014
Mr Blake! Come in, Mr Blake! Pull up a beanbag. Great to see you, William. Or Will.
Bill. Billy.
May I call you Billy? Doesn’t that just make you sound like a rock’n’roll star? Billy Bla–
Absolutely, Mr Blake, I understand. Just throwing it out there.

What a sharp move to come and see me, Mr Blake. Your work? So exciting. That space thing you did, Blake’s Heaven, that was way ahead of its time. I wish more people would’ve taken notice.

Please, Willy, no false modesty! Your name’s on it, so be proud of it. Anyhoo, that’s in the past. You want to talk about your new children’s book, am I right?

Let’s see. Songs Of Innocence And Of Experience. Well, I love it. We can work on the title later. But your rhymes! Love the rhymes.  Especially the animal ones. Almost as good as what’s-his-name, Raoul Dale. The kids, they love their animal rhymes.  The Lamb, The Tiger – don’t you worry, we have proof-readers who can check your spelling – but I think you maybe need a few more critters in there. Some birds, some fish. Here’s one for nothing! “Oyster, Oyster, clammed up tight… ti tum ti tum ti tum.” I’ll leave you to sort out the details, that’s your beat.

I heard you couldn’t find a publisher for it? Let me guess, you self-published? Thought as much. Such a pity. Same old story. The thing is, Will, you must never give up. That Rowling chick, she got turned down by like fifty, sixty publishers, till she thought of using the Edinburgh café sob story. And bingo! The rest as they say is history. Any kids, Bill? Never mind, we’ll cook up something for you.

But no, don’t go it alone. There’s more to being a published writer than writing. I’d say the writing is maybe twelve, thirteen percent of it. Even more important than being a good writer, Bill, is having a great Editor… You used to do the editing yourself? Ah, no wonder. We live and learn. Tiger with a Y, etcetera… And that’s not all. Your book is a collection of rhymes for kids. So you’ll need pictures. Or else the kid is like, Yawn! Where’s my Nintendo? So we have to find you an illustrator. 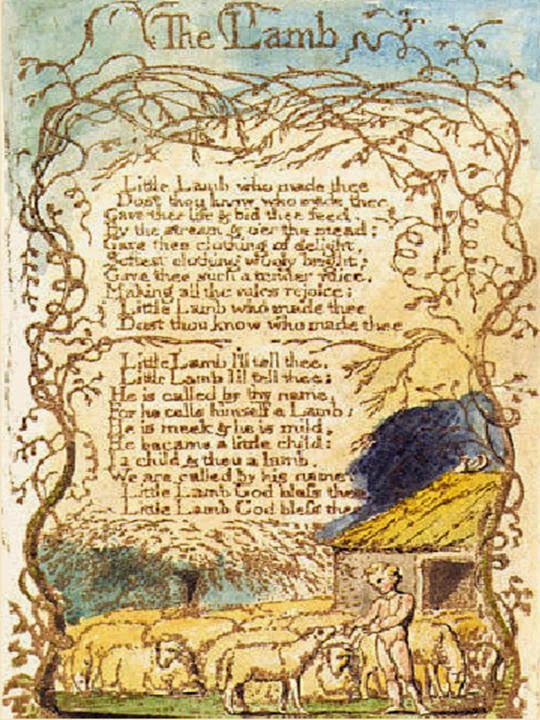 Say again? You do the pictures yourself? Yeah, but I’ll bet they’re…

Ah. Actually, those are quite good. Still not convinced that’s a tiger, but… Okay. You should have told me you could draw. All it says on your résumé  here is that you’re… 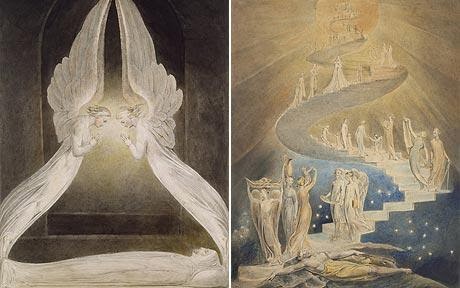 one of history’s greatest painters. Oh. Who knew?

Still, Mr Blake. It’s not enough to be a great poet and a great painter these days. The market, it’s like a war zone. You want your book out there? Then the least you need is a publisher to produce the physical books. I mean, readers need printed copies, right? How would you – ? Oh. You print them yourself? You’re a qualified printer too? Ah, but the paintings! You can’t print books with colour pictures, can you? Woah… You did? But the process for printing colour pictures wasn’t even invented in your time! What? You invented it yourself? Just for this book? Why am I repeating everything you say?

Okay, Mr William D. I. Y. Know-It-All Blake. Tell me this. If you’re such a hotshot poet, and a world-class painter, and a professional printer and book-binder and inventor, who doesn’t need any help in publishing his own book, thank you very much…  then why did you come to Dancre and Mildew in the first place? 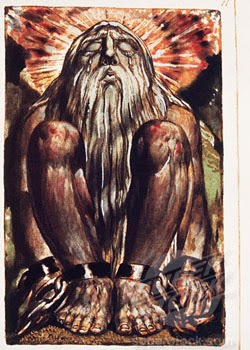 What? To get some new ideas? You like to study the demonic side of humanity? Oh. Oh, charming.

Stephanie? I’ll have my coffee now. No, only the one cup. Mr William Blake was just leaving.

Lydia Bennet said…
great stuff! Funny, but also a timely reminder of Blake's brilliance. I love him, what a genius. They thought he was mad... self-pub has had an image problem for some time!
3 April 2014 at 10:29

John A. A. Logan said…
Absolutely brilliant, Nick...one minute I was re-experiencing Blake's Seven/Heaven...and then...I did not see the rest coming at all, but was joyfully steam-rollered by it!
A wonderful tribute to the truly visionary WB, too.

One of my WB favourites:


Songs of Experience
A Poison Tree

And I water’d it in fears,
Night and morning with my tears;
And I sunnèd it with smiles,
And with soft deceitful wiles.

And it grew both day and night,
Till it bore an apple bright;
And my foe beheld it shine,
And he knew that it was mine,

And into my garden stole
When the night had veil’d the pole:
In the morning glad I see
My foe outstretch’d beneath the tree.

Kathleen Jones said…
Oh, rose thou art sick.
The invisible worm
that flies in the night
in the howling storm:

has found out thy bed
of crimson joy:
and his dark, secret love
does thy life destroy.