History, change, and renewal: a weekend in Scotland, with Ali Bacon

When we do historical research it’s easy to think that we have to uncover some hidden world lying beneath the accretions of business, construction, technology and all the stuff that has happened between ‘now’ and ‘then’, stuff we often think of as progress.
But of course things aren’t that simple, and I was reminded of this last weekend on a bit of an impromptu trip to to the small town in Angus which was home to many of my ancestors.

I had been there only once before, in my childhood, and had hazy memories of family walks, paddling in a very cold river, and on rainy days (we had a few!) being allowed to spend my pocket money in Woolworths. (Retail therapy started young in my case!) Returning after 50 (or more) years, I found (no surprise) that even Woolworths has gone, leaving a random mixture of businesses: –an upmarket deli and an unreconstructed corner shop,  a local hardware supplier and a Polish grocer, a small branch of Boots and one of those wedding boutiques that seem to pop up in small towns. Despite the addition of the Auld Bakehouse serving posh coffee and cake on the site of a 1950s family bakery, the effect was curiously inert.

But what did surprise me was the quaintness (unnoticed by my seven-year-old self) of the old town centre with lots of the 18th century houses in the street  where our ancestors lived more or less unchanged. It was comparatively easy to picture their lives there in a sleepy town built around the cathedral where my great-great-grandfather worked, surrounded by farming country and close to the hills and glens.

But in fact this was also an illusion. From the mid-nineteenth century Brechin had two linen factories and a paper mill. Contemporary engravings show a town of smoking chimneys and my Granny worked, like all of her friends, at Duke’s, a power-loom mill built with enough Victorian chutzpah to have been preserved today as up-market flats. Local almanacs provided for us in the library showed the plethora of manufacturers and retailers attending to the needs of a busy population. it was not, but it had all the hallmarks of Victorian society, a station and a new town square, a floridly gothic Mechanics Institute and a slum area prone to flooding.
So history is not so much about progress (however we define it) as change and renewal. When one industry dies (Dukes closed in 1980) what will take its place? There was new building going on and our landlady claimed she was busy on week-nights with businessmen en route to and from , but I wonder if Brechin will be bigger or smaller, busier or more dormant, in another fifty years.  Time marches on, but not always in the direction we expect.
Last year I read Adam Thorpe's Ulverton, a curious novel that exposes the life of a community through its landscape, and you could at least say that in Brechin we can peer through the centuries and imagine the characters who lived and worked there. 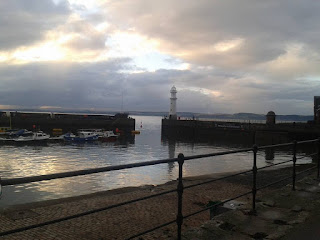 By contrast, on our way home, we had an overnight stop in ’s area, where high-rise apartments, hotels and supermarkets have been flung out on what was once a links area. Newhaven harbour at least is intact, giving us a ‘bonny view’ as we scoffed down much-needed pizza in the waterfront restaurant, but how many travelers would know that across the road as recently as the 1930s there was a  bustling fishing village much admired for its work ethic and provision of what we think of today as social services.
Newhaven was also made famous by the photographs of my hero and so I couldn’t resist a quick look at what’s left. To be fair the original village (as seen here) is now a conservation area and the Victorian school is still in use as council offices alongside a bright new primary. 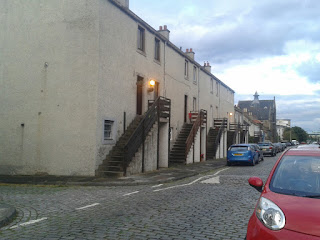 A few streets of new housing have been built in the style of the fishermen’s ‘forestair’ cottages. But for me on the edge of this city with so much history, this tiny settlement (briefly celebrated in my contemporary novel) has somehow been eclipsed by the world around it. If only its museum (now a wholesale fishmonger) had survived it might have made more of a mark and call to passers by that there is something here worth seeing or learning about.


But perhaps not everywhere can wear its history on its sleeve, and writers will always be happy to dig around and see what lies beneath. 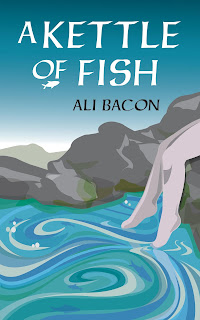 She’s running as fast as she can, but the past is catching up.
Ailsa has just left school and should be living it up on a summer trip, but her plans are scuppered by her needy and secretive mother Lorraine. In desperation she takes up with local fishmonger Ian. He’s good for her soul and her sex-life, but their future is blighted by the shadow of Ailsa’s absent father Tom, an art-teacher who left home after making the papers in the worst possible way. Ian eventually blots his copy book and Lorraine is implicated in his treachery. Ailsa takes off for Edinburgh where Shane, a picture rights dealer with more than a touch of the night, is happy to provide a job and a bed. With him Ailsa lets go of her inhibitions, but can she let go of her past?
A Kettle of Fish moves from the East coast of Fife to the art galleries of Edinburgh, where Ailsa finds herself fishing for clues about Tom.
Posted by AliB at 00:30

I live only 8 miles from Brechin, and over the years the town seems to have lost a lot of its oomph. It once hosted Flicks, a nightclub which took over one of the cinemas (Brechin had two) after the cinemas died the death that most small town cinemas did. Flicks was hugely popular in its day and many people travelled for hundreds of miles to attend its lively sessions. Alas, Flicks went the same way as the cinemas before it, and is now an ugly shell of a building. I modelled my nightclub, Teasers, in the Dundee Crime Series, on Flicks, although I transported it to Dundee in the process. I can't help thinking that Brechin, like a lot of small towns, is dying as a shopping centre, maybe the result of its inhabitants travelling further afield for their needs. What price progress?

Good post Ali, it brought back memories of Brechin when it was a thriving small town, although I should actually say'city' because it is a Cathedral City.

Hi Chris - yes, there was very little in the way of shops, although I didn't get the feeling there was a lot more in Montrose where we ventured one evening. So where is the nearest shopping place - Arbroath? Forfar? - we missed both of them. As for the picture house, yes, an awful looking place now. A close family friend worked there when it was in its heyday.
Now funny you should say that re the cathedral, because I was aghast when Pointless did not allow Brechin as a city - using some new criteria I suppose!

Most small towns are much the same nowadays, Ali, although I think Montrose is not quite so far down as Brechin. Most people head for Dundee or Aberdeen to do their shopping, or even further afield to Edinburgh or Glasgow. And I'm as guilty as anyone. Probably the only thing shopped for locally is groceries, except for bits and pieces from local shops. However, I do use a couple of local clothing shops in Montrose. Neither of them on the High Street, so I suppose you have to know where to look. I think the difference between Montrose and Brechin is that most shops are in the centre of Brechin, whereas you will find shops in the streets leading off from the town centre in Montrose.

When I was at art school, many decades ago, we were asked, if possible, to go back to where we grew up, and to see at what stage we felt we'd 'come home'. I grew up in Hornsey, North London, which I remember as unremittingly grey and smokey and nothing but concrete - apart from the churchyard, where I broke my arm having autumn leaves thrown at me. To my surprise, it was a lot greener and nicer than I recalled. Presumably the Clean Air Act, and the removal of bomb sites had a lot to do with it. We moved there when I was three, so there aren't any ancestral memories. But I do remember the racing cars practising up and down the road outside, and the flags that were all over the station yard where the vehicles were built when one of them won its first race. It was a Lotus. But I never felt at any stage that I'd come home.

Hi Elizabeth - interesting isn't it? I did used to feel a sense of coming home to where I was brought up but I think that has gone now: too many years, too many changes, not just in the town but in me and my family and friends. It felt a bit alien last time I was there. I did used to feel quite emotional just going back to SCotland, but having done a few trips in recent years, that has become familiar again, but in a different way.

I live now where, and very near where, I grew up and went to school and was a teen and so on, it's typical of the north east - my roots are strong here though I love to travel. When I'm out I can often 'see' ghosts of myself at younger ages, rockpooling with my father and brother, climbing trees, underage drinking, driving my kids to millions of hobbies and classes... interesting meditation on 'going back' Ali. Nostalgia and nostalgia misplaced are both very important in life and lit.

Interesting post, Ali (have only just got back online, so am reading what I've missed!) Our nearby small town of Maybole was once a thriving manufacturing centre - boots and shoes mostly and I once wrote a trilogy of radio plays about it - but when that industry and everything related to it collapsed, the town never quite recovered, and seems to have been sliding slowly downhill ever since. The town once contained all the historic town houses of the local 'gentry'. But at some point in the 1950s and 60s, a great many of the surviving mediaeval buildings were demolished - there's a tragic booklet showing exactly what the town lost including one of the finest and most spectacular carved stone fireplaces in Scotland. There were so many buildings that would have made it a real attraction for the tourists that pass through on the way to the Irish ferries - but they've almost all gone. Only two or three years ago, the planners allowed developers to demolish the last surviving and rather beautiful mill building so that they could replace it with a few blocks of 'luxury flats'. (Are there any bog standard flats, these days, I wonder?) They have been promised a bypass for some 45 years ... you'd have thought the Scottish government might have got round to it by now! But of course, we're a long way from Edinburgh. The town has a fascinating history and a flourishing local history group - but you have to dig to find out more.