By Leverett Butts - September 23, 2015
Last month, I decided it was time I did another countdown, but this time I'm counting down the five best metafictional comics: those that deal either overtly or covertly with how stories work, that are to a greater or lesser degree "aware" of themselves as comics. 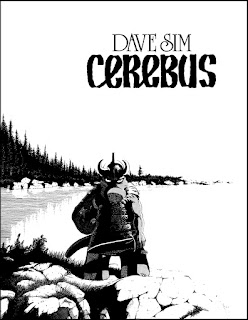 Cerebus is perhaps one of the biggest success stories in independent publishing. In December 1977, Canadian cartoonist Dave Sim, created what was supposed to be a satire of sword and sorcery comics. This 6,000 page saga tells the story of an aardvark named Cerebus "the Earth Pig Born" and barbarian-for-hire. He wants only to earn enough gold fighting in order to pay his bar tab until the day he meets Jaka, a dancer with whom Cerebus falls in love. He spends much of the rest of his days trying and failing to obtain her, and along the way, he becomes prime minister, pope, pariah, and prophet.

As early as issue #26, the comic evolved into biting political satire, and it was not long after that the title moved on to satirize literally every aspect of society and popular culture. On the surface, it seems little different from Howard the Duck. However, where Steve Gerber's creation lasted just a handful of issues with only one dealing exclusively with writing fiction, Cerebus spanned 300 issues, and from issue 114 (in which Oscar Wilde takes over as narrator for a while), until the end, the art of writing becomes as integral to Sim's story as the plot itself.

Indeed, issues 139-150 (collected as Melmoth) deals almost exclusively with how the events of the previous storyline (Jaka's Story issues 114-138) lead directly to the death of Oscar Wilde. Much of this tale is even told using Wilde's actual letters as the narrative. 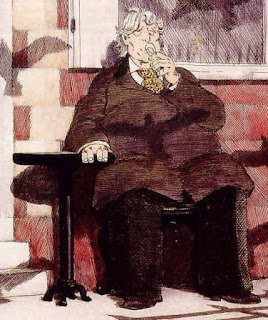 At least half of a later storyline, Reads (issues 175-186), deals specifically with the business of commercial writing and the dangers inherent in selling out, and in the next stroyline, Minds (issues 187-200), the climax of the entire series, Cerebus literally meets his creator, a disembodied voice named "Dave," who meticulously lays out Cerebus' life path and shows him where he went wrong before showing him all the flawed futures he can expect should Dave "make" Jaka love him.

Later (issues 240-265) Cerebus and Jaka will spend several days on a riverboat with F. Scott Fitzgerald and will winter with Ernest Hemingway. Both of these storylines discuss either overtly or obliquely the many ways real life intersects with literature. 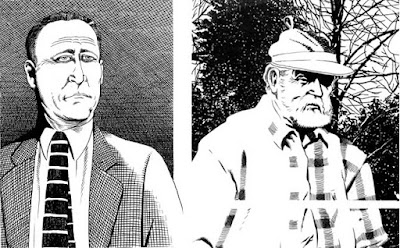 Literature and storytelling, weave in and out of Cerebus' storyline throughout it's 27-year run in much the same way as good literature is intertwined in our own lives. In many ways, this metafictional aspect of Cerebus becomes a metaphor for the ways in which we all draw advice, inspiration, and meaning from our own reading and acts of creation.

And while that may not be the primary point of the story (which can be taken to be anything from the highly controversial "Women are users and men are dupes" to "The best religion is a kind of mish-mash of Judaism and Islam" to "The hell with it, there's too much here to single out just one thing"), it is certainly the idea that appealed most to me and which brings me back to it again and again.

Next Time: I look at childhood fairy tales and the artist who draws them. 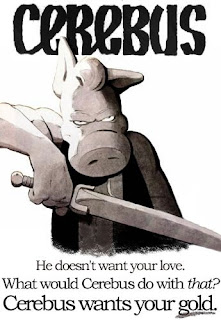 Bill Kirton said…
I'm slightly ashamed to say that I'm not familiar with graphic novels/comics/whatever the correct label is, but this makes me want to try Cerebus. It sounds as if it satisfies on many different levels. Thanks, Lev.
23 September 2015 at 09:10

Lydia Bennet said…
never read a graphic novel, nor a comic in years. maybe I should! Another countdown classic Lev!
23 September 2015 at 10:34

Nick Green said…
I used to read Cerebus, though I preferred the early instalments. Hard to credit the idea that it could become just TOO WEIRD having started off as a Conan parody with an aardvark in the lead role, but that was a mark of its uniqueness I suppose.

Elrod of Melvinbone was a great invention too, wielder of a black sword... black because it was rusted through.
23 September 2015 at 10:48

glitter noir said…
Sounds enticing. But 6000 pages...I barely survived getting caught up on six seasons of Breaking Bad. Great post, though!
24 September 2015 at 23:22