Visiting the setting of a favourite book, by Elizabeth Kay 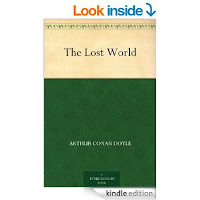 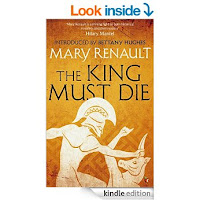 There are a handful of books that made a big impression on me as a teenager. The King Must Die, by Mary Renault, and The Lost World, by Sir Arthur Conan Doyle, are the two that had the biggest impact. Both of these are now available as e-books, and I’ve re-read both recently on my Kindle. In the last few years I’ve visited the settings for both these books; one was a bit of a disappointment, and the other was far more impressive than I’d ever expected.
and

The King Must Die is a brilliant book, narrated by Theseus and covering his time in Crete as a bull-dancer. Theseus is very much of his time and place; supernatural explanations for geological phenomena seem obvious to him, and his belief that he is the son of Poseidon perfectly plausible. Nevertheless, everything that occurs in the book happens for scientific reasons, and there is no supernatural element at all. I don’t think I’ve ever read something written from the point of view of a character from early history that is so utterly convincing. Theseus is even a bit of a country bumpkin, for Crete is a very sophisticated society and the palace at Knossos is completely outside the experience of a prince who comes from Mainland Attica, a place at that time of many small kingdoms.
“…picture to yourself all the kings’ palaces you ever saw, set side by side and piled on one another. That will be a little house, beside the House of the Ax. It was a palace within whose bounds you could have set a town. It crowned the ridge and clung to its downward slopes, terrace after terrace, tier after tier of painted columns, deep glowing red, tapering toward the base, ringed at head and foot by that dark brilliant blue the Cretans love…” 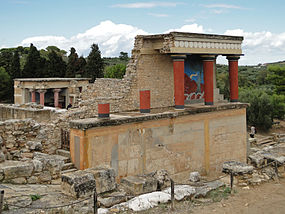 So when I booked trip to Crete this summer, I was heading for a place that had lived in my imagination for decades. I suppose I’d pictured something not unlike Pompeii, which I’d visited on Christmas Eve a couple of years previously and had had more or less to myself, during an uncharacteristically warm spell under a cloudless blue sky. The palace of Knossos was so much smaller than the Knossos of my imagination, and it was destroyed by the colossal earthquake and subsequent tsunami in 1628BC. A lot of restoration work has been done, and it’s difficult to tell what’s original and what’s not. The most rewarding part of the trip was a visit to the museum, where I saw the one picture of the bull leaping about which so much has been written. For me, the most impressive part of the whole trip was the Kamares ware pottery. Discovering that there was such a thing as a “luxury goods” in the Mediterranean so long ago made the House of the Ax finally come to life for me. The delicacy of the little cups 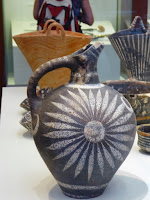 that had been made for children, the complexity of the designs, the sheer beauty and originality of the pieces of ceramic made the whole trip worthwhile. But the archaeological site itself was a disappointment. 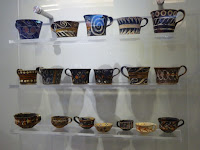 The Lost World is based on the premise that an undiscovered plateau in South America had been isolated from the world for millions of years, and that dinosaurs still existed there. In addition, a number of other creatures had found their up from time to time, so this place now housed ape men as well as pterodactyls and diatrymas, all from very different epochs. None of them found their way back down again, but they’d arrived in sufficient numbers to breed. The book was written in 1912, and still has a very colonial feel to it, with the white male regaining supreme.
The illustrations in my edition of The Lost World were pretty poor. All the artist had to go on was Conan Doyle’s description, as a trip to the Amazon to observe the geology at first hand was clearly out of the question.
“…an enormous line of ruddy cliffs, which encircled, beyond all doubt, the plateau of which Professor Challenger spoke. Their height, as we approached them, seemed to me in some places to be greater than he had stated – running up in parts to at least a thousand feet – and they were curiously striated, in a manner which is, I believe, characteristic of basaltic upheavals… The summit showed every sign of luxuriant vegetation, with bushes near the edge, and farther back many high trees…”
The pencil drawing depicted something a bit like an enormous upturned Bundt cake tin, flaring out slightly at the top so that the overhang made it unclimbable. It was the most unlikely and preposterous landscape I had ever seen, and if the writing itself hadn’t been so good a suspension of disbelief would have been impossible. The place was clearly a total figment of the imagination. 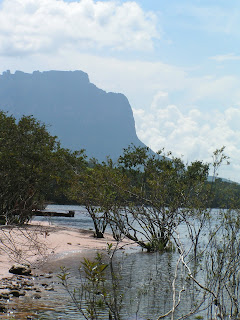 In 2008 I went to Venezuela. By this point I had read up a bit about the trip, and knew that we would be visiting an area where I would be able to see these table-topped mountains – tepuis – for myself, on my way to the Angel Falls. The nearest airstrip is at a place called Canaima, only accessible by light plane, where we landed on the road because the runway had too many potholes. However, nothing I had read prepared me for the trip up-river through the Devil’s Canyon in a motorised dugout canoe, with tepuis on either side. 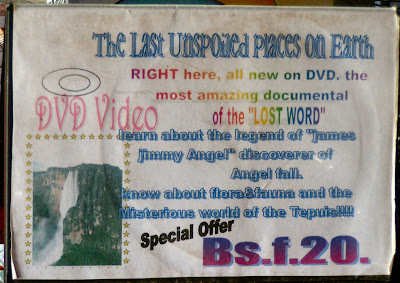 A height of one thousand feet is a considerable underestimate – three thousand is closer to the mark. They are so sheer that some remain unexplored, as climbing them is hazardous and you can’t drop anyone on the top from a helicopter as there’s nowhere to land it. The four-hour boat trip was quite extraordinary; I haven’t seen a landscape before or since that was so awe-inspiring. Each tepui is an isolated ecological island, with a different climate from the rain forest on the plain below due to its height. The flora and fauna of each is unique. This was a setting where the reality was even more impressive than the fiction. As was the poster at the airport, with its wonderful mis-spelling of World...

What a fascinating account. You bring the places to life and make me want to visit them. Thank you

What an amazing adventure!

Off to China next month! Getting excited...

Tantalising post! I was a huge fan of Mary Renault, our Latin teacher at school recommended her, perhaps not realising there's some hot boy on boy action in many of them :) I went to Crete and visited Knossos too, it's better in literature but the island itself is evocative of that time. We took our kids to the Lake district once to visit the Swallows and Amazons locations, and also Beatrix Potter's. That was pretty cool (as was the incessant teeming rain).Visiting places you've read about or seen on films is always special as you feel you already know them, especially with New York City which I loved.

I really enjoyed this - thank you! The year before last, I heard a couple of plays about George Orwell and decided it was time I read some of his books again. I took 1984 to Jura, where he wrote it, at the end of a 7 mile track in the last months of his life. It was fascinating to experience how far he took himself from people when he was writing so darkly about human nature. I'd definitely do it again with other books.