The pen is mightier than the sword. By Ann Evans.

A little while ago, I had a Facebook profile picture taken of me holding a pen and a sword – well actually it was a large wedding cake knife, but the message was the same – The pen is mightier than the sword. So I was quite surprised to learn that the person who first came up with that phrase was Edward George Bulwer-Lytton. Or in short, Lord Lytton. This caught my interest as I live in Lord Lytton Avenue.

So, deciding to do a little more research on him I found that Edward Bulwer-Lytton was an English novelist, poet, playwright and politician. Born in 1803 he was hugely popular and wrote 27 novels, earning him a considerable fortune. Knebworth House, famous for its rock concerts (I've seen David Bowie and Queen there), was his home.

Through his writing, he came up with a number of phrases which have been turned into cliches, such as the great unwashed, dweller on the threshold, the almighty dollar, as well as the infamous opening line: It was a dark and stormy night.

Lytton wrote the famous line The pen is mightier than the sword in his 1839 play Richelieu; Or the Conspiracy. The play was about Cardinal Richelieu and the line comes in Act II, scene II:

True, This! —
Beneath the rule of men entirely great
The pen is mightier than the sword. Behold
The arch-enchanters wand! — itself is nothing! —
But taking sorcery from the master-hand
To paralyse the Cæsars, and to strike
The loud earth breathless! — Take away the sword —
States can be saved without it!

Research shows that the play opened in London's Covent Garden Theatre on 7th March 1839 with William Charles Macready in the lead role. He believed its opening night success was 'unequivocal'. It seems that Queen Victoria attended a performance a week later.

The phrase the great unwashed – meaning the lower classes, made its appearance in Bulwer-Lytton's 1830 novel Paul Clifford, when he wrote: He is certainly a man who bathes and 'lives cleanly' (two especial charges preferred against him by Messrs. The Great Unwashed).

It was a dark and stormy night; the rain fell in torrents — except at occasional intervals, when it was checked by a violent gust of wind which swept up the streets (for it is in London that our scene lies), rattling along the housetops, and fiercely agitating the scanty flame of the lamps that struggled against the darkness.

And while his writing was popular back in the 19th century, in more recent times his style is often mocked and regarded as melodramatic or purple prose.

Coining another cliché – not created by him, but by Roman poet Lucretius, one man's meat is another man's poison, as Writers Digest described this opening sentence as “the literary poster child for bad story starters. While the American Book Review ranked it as #22 on its 'Best first lines from novels' list. So, I suppose it's all a matter of taste.

It probably is one of the most well used phrases. There's a board game entitled It Was a Dark and Stormy Night, where contestants are given first lines of various famous novels and must guess their origin. And the cartoon dog Snoopy, created by Charles M Schulz uses the phrase regularly. 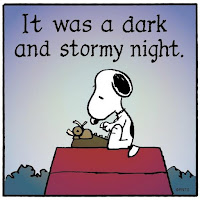 There's even a website and writing competition dedicated to the skill – or otherwise of Bulwer-Lytton. In 1982 the annual Bulwer-Lytton Fiction Contest was formed – and still runs to this day. This was sponsored by the English Department at San Jose State University to recognize the worst examples of “dark and stormy night” writing. Entrance have to compose the opening sentence to imaginary novels. Every year it attracts thousands of entries from all over the world. The 'best' of the resulting entries are then published in a series of paperback books, starting with It was a Dark and Stormy Night in 1984, available from Penguin Books and Amazon. 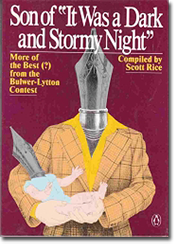 And the debate goes on as to whether Bulwer-Lytton was indeed a great writer or a master of purple prose. The website http://www.bulwer-lytton.com has a fun quiz which you can take part in, where they list a dozen extracts from novels, and you guess whether the extract was written by Lytton or Dickens. I scored a very poor 33%. See how you get on.

Lydia Bennet said…
The poor guy seems to have had a most unfair drubbing, his style is no more florid than anything else at the time by writers still revered - but at least he's got the satisfaction of his words being part of the language and still used often today. I wonder if any of our quotes will enter the language!
13 September 2015 at 23:05

Dennis Hamley said…
Valerie, sorry, but I HAVE to tell you. I've found ME quoted in an online dictionary of quotations, alongside Goethe, Gibbon and good old WS himself. A line from Hare's Choice I'd forgotten I'd written. 'Things aren't untrue just because they never happened.' Just say that 20 times a day and I become immortal! Ann, I think that though BL is an impossible novelist he was a really wonderful phrasemaker. But I wouldn't even dare to try to do a quiz on him, so well done Sue.
14 September 2015 at 05:04