Writing to help children save the world - Kathleen Jones

Someone once said to me, after a talk at a literary festival, ‘You’re so privileged to have a platform to reach people’.  It took me by surprise because I hadn’t thought that being a writer would result in a moral responsibility to save the world!  That being published was a privilege that might give rise to this kind of obligation hadn’t surfaced in my mind. I've thought about it quite a lot since then. As published authors, what we write is read by thousands of people whose lives we touch in unknown ways. That chance encounter with a reader made me aware not only that what I write can affect people’s lives, cheer them up, entertain, provide an escape route,  but also that we do, as writers, have a unique opportunity to share experiences and ideas that might help and inspire people.

I’ve recently paid another visit to the National Centre for Children’s Books - Seven Stories in Newcastle - where they currently have an exhibition of books designed to carry important messages to children growing up in a confusing and sometimes frightening world.
Quite a lot of the display space is dedicated to the work of Michael Foreman, an award winning children’s author and illustrator, whose collaboration with Michael Morpurgo has produced some classic books.  Like Morpurgo, Foreman has also written about the war - wonderful books that help children understand the world wars of the twentieth century and their effect on ordinary people.  His memoir ‘War Boy’ was written from personal experience, growing up during the second world war, and this experience informs his other books -  such as The General (with Janet Charters) and War and Peas. 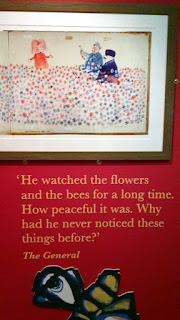 But there are also books for younger children about modern conflicts that not only make both adult and child aware of the horror and stupidity of war, but also send a message of hope that perhaps children have the answer to future healing.  Michael says that he ‘likes to tell stories about the world, not just the fun, jolly bits, but also the threatening bits.’  His stories take on some of the worst aspects of the world as it is today - civil war, poverty and environmental degradation, familiar experiences to large numbers of children all over the world,  but at the end Michael says that he wants ‘to leave them with hope and the sense that they can do something about it’. 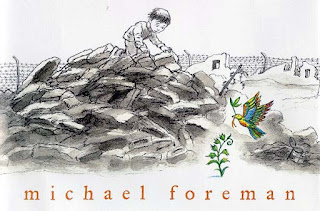 A Child’s Garden, subtitled ‘A Story of Hope’, written during the Bosnian war, is exactly that kind of book.  It begins with the picture of a little boy growing up in a place that looks very like Gaza, but could be Aleppo, or any other war-torn city.  In a pile of rubble, after a night of rain, the boy sees a small green shoot growing. So he waters it with an old tin can, gives it shade, and soon it begins to climb up the barbed wire fence.  Beyond the fence is another world of green hills, streams and houses that have not been bombed to rubble. Soon the green, climbing vine has spread across the barbed wire and is alive with birds and butterflies. Other children come to play in its shade and it becomes a beautiful oasis in the midst of destruction.  But, one day, ‘soldiers came and destroyed everything’. The vine is uprooted and thrown into the ditch. ‘The boy thought his heart would break’. 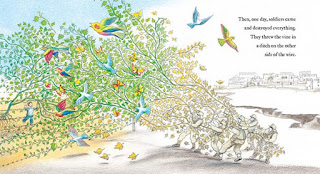 Winter brings hard times for people who have no proper houses to live in, but in the spring, the boy sees green shoots growing in the ditch where the soldiers had thrown the vine.  On the other side of the fence, a little girl comes to water them, ignoring the tanks parked on the edge of the ditch.  And then the boy notices that there are shoots on his side of the fence too.  The girl and the boy tend the plants until they once more cover the fence and the birds and the butterflies and the children return.  The boy realises that it doesn’t matter if the soldiers uproot their garden again. ‘Roots are deep and seeds spread.’  One day, he thinks, the fence will be taken down and both groups of children will be able to walk in the hills again.  It’s a powerful, moving message.

The book has a dedication to Amnesty International on the title page and quotes the Amnesty aims.  ‘Every one of us has the right to experience justice, fairness, freedom and truth in our lives.  These important values are our human rights.’

Michael Foreman also writes about environmental issues for children.  Mia’s Story is about a little girl who lives in South America on the edge of a rubbish dump, which is the people’s only resource. My favourite,  One World, features two children who go rock pooling and find a pool with star fish and crabs and sea anemones, but it also has a clot of oil in it and some feathers from a dead bird. 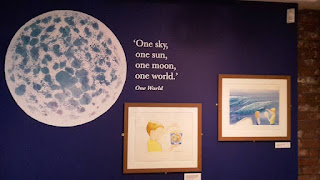 At first the children take out the sea creatures and make a new world in a bucket, but they notice that the rock pool is becoming increasingly cloudy from the oil and it reminds them 'of the larger world they knew, where forests were disappearing in the clouds of smoke and people in towns were poisoning the land and the seas.  A world where creatures even in far off snows and the deepest oceans were not safe.’ They put the creatures back in their proper habitat and remove the oil blob and the feathers, leaving a pristine rock pool for things to thrive in.  On the last page they look up at the moon which reminds them that they ‘all lived on one world.  And that world too, they held in their hands.’

It isn’t told in a didactic way, but the message is very clear.  We have to clean up the world; it’s the only world we have.

The idea that there should be a didactic element to books isn’t new.  Most Victorian children’s books were didactic, and it was very effective.  Modern American children’s literature often has a moral message too. It's something that makes me uneasy. There's a fine line between educating and brain washing. I keep remembering the Jesuit message; "Give me the boy and I will give you the man". Little, growing minds are impressionable and you have to be careful what you put into them, but, as far as I'm concerned, anything that helps them to see a way to resolve conflicts and preserve their environment for their own children and grandchildren, can only be a positive thing - though I know there are a lot of people who hold a different view.  I’m going to give the last word to Michael Foreman:
“I hope that children today will see the world as a place to care for and not conquer.  It’s going to be their world and I want them to feel that they can do something to make it an even better place.  Give the children hope and love and they will become empowered.”


There are quite a few children’s authors among the Authors Electric who will probably have strong views on the subject. 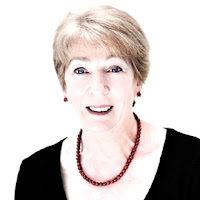 Kathleen Jones (who doesn't write for children) is a biographer, novelist and poet who publishes on both sides of the fence.  She blogs at 'A Writer's Life', is often to be found wasting time on Facebook, and Tweets incognito as @kathyferber

Her latest novel, The Centauress, is set in Croatia, and available on Amazon.  Kathleen is a passionate environmentalist and she is currently working on an eco-journal about First Nation environmental issues in British Columbia.

Just exactly so - I've been up since early this morning thinking about migrants and refugees and the wickedness of people who take their money and take no responsibility for their safety. I learned a lot about Chinese migrants when I was writing the first Strong Winds vols and I'm going to use that for my blog this week. YOu blog gives me lots of reading ideas and I'll share it in the hope that others will be glad of them too. Thank you

Fine piece, Kathleen. Thanks. And have you read the Guardian's first leader today? Amazingly good.

A very timely and moving post, Kathleen. It sets out the responsibility of the serious children's writer: not to preach values but to embed them in the warp and weft of the story and this I have always tried to do. Some subjects, the migrant/refugee crisis for example, are too big for me even to comprehend, let alone write about: there's a great difference between sympathising and empathising. Michael Foreman is a wonderful writer and can do it. War Boy is a marvellous book. I remember it came out just before my own The War and Freddie, which shares its motivation of recording a real and monstrous event from the standpoint of a little boy (a fictionalised me) before it was all forgotten. It's still in print (just: it's now published by Catnip) and has been since 1991. But there lies the difference between Foreman and me. He has the courage and confidence to take on the world as it is, deal with a (then) contemporary crisis and produce the marvellous image you describe in A Child's Garden. I know that to say anything comparable in narrative terms, I have to go back into the past. To show the permanence of hope whatever the situation is, I think, the necessary theme of the children's writer because if we don't, not many others will. That's why I abominate the tendency towards nihilism I detect in some children's/young adult books of today.

Thank you Julia. I like your Strong Winds books because they do send out a strong message and they deal with contemporary issues in an illuminating way.
Hi Jan - I'm currently in Italy, so can't get hold of the Guardian except online, so not sure if I've read the piece you're thinking of. There are several good articles today.
Dennis, I'm glad you liked War Boy - I was born after the war, but listened to my parents adn grandparents stories. It was a mixture of the grim and the hilarious. Michael Foreman seems to be able to do both and the writing is so simple and yet so powerful.

Very interesting post, Kathleen. You've mentioned some books there that I'd like to read, and hadn't known about. Thank you.

A lovely, thoughtful post, Kathleen. Amongst all the usual angst and fretting about formatting, marketing and the other important trivia of what we do, it's easy to lose sight of the fact that, as authors, we have responsibilities for the effects we cause. But then, what a privilege it is to have such intimate access to others.

It is, isn't it Bill, and it took me a long time to realise it!
Ann - I'm glad to be able to introduce you to such a wonderful author.