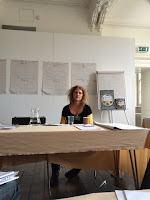 I am in the middle of conference fever at the moment. I am currently at a conference in Derbyshire and I am writing this whilst waiting to man a stall for The Association of Christian Writers. At the weekend I was in Stirling where I was at Bloody Scotland - A Weekend to Die for. Funnily enough this is a crime writing and reading festival. There were many well known authors there including Ian Rankin, Lin Anderson, Alex Gray and Linwood Barclay, amongst many others.

I attended the writers day and one workshop which stood out in my mind was that on Screenwriting Tips for Authors. This was run by Alexandra Sokollof who in a previous life was a screenwriter in Hollywood. She has used the techniques she learned as a screenwriter and now uses these in her writing. The workshop was designed around these.

Screenwriting has developed from the original Greek plays. In Ancient Greece one of the major forms of entertainment was going to the theatre. Now these theaters were not the comfortable places we know today. The seats were hard and it was hot. There were natural breaks in the play to allow people to get a drink, something to eat and take a stroll around. Thus, there were many other forms of entertainment outside. In order to entice the audience back the scene had to end at a point where those present wanted to know what happened next.

This led to a 3 act, 8 Scene form of playwriting and this has continued until the present day. It is this which has been transferred to writing novels. This is an excellent method of plotting novels which has been tried and tested throughout the ages. It allows the writer to keep the action going whilst pacing the plot to allow the reader to breathe. Alexandra has written a superb book to go with the workshop. It is called Stealing Hollywood: Screenwriting Tricks for Authors 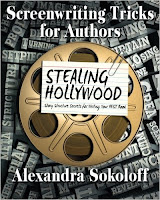 This is a superb book and I can Highly recommend it to all writers. It will revolutionize your plotting and pace.

Wendy lives, and writes, in Dundee Scotland. Her first book, Killer's Countdown, was published in November, 2014. The second book in the DI Shona McKenzie Mysteries, Killer's Craft, will be released on 20th July, 2015. You can find out more on her:

Lydia Bennet said…
I met her at Iceland Noir, impressive woman. Different genres can feed into each other in useful and interesting ways!
16 September 2015 at 23:52

Wendy H. Jones said…
She is very interesting Lydia, and friendly and helpful. It was a fabulous workshop
16 September 2015 at 23:56

Fran B said…
Interesting thought. The book looks good. Thanks for that.

I did a short writing course called 'Ripping Scripts' a few years ago. The challenge of writing a short script each week to tell a story and introduce characters did wonders for my dialogue-writing. Same sort of idea as your workshop, I guess.
You need to update your bio, though - it's still talking about your second book about to come out in July!
17 September 2015 at 21:58