October 8th and we are heading north. It’s that time of year; the annual gathering of a group of friends brought together by Di, no longer with us and much mourned. We come from Southampton, York, Alnwick, Berwick-on-Tweed, drawn by powerful associations and the beauty of the Cumbrian lakes and fells. On a cloudy, moonlit evening we visit Di’s grave in Dacre churchyard. It overlooks fells where the larches are always standing out against the other trees, as if marching to their own individual beat of time. Her Lakeland slate headstone is dwarfed by the Norwegian maple now. Fourteen years ago it was a spindly sapling. We toast Di in Bollinger and pour a libation. It disappears rapidly into the earth. 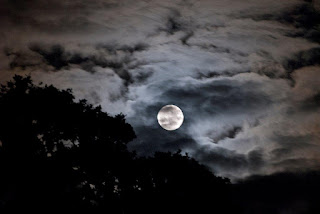 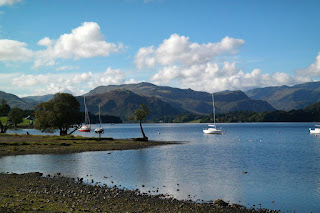 Usually, at this time of year, we meet autumn as we drive northwards. This year, the colours in the trees are hardly changed. It hasn’t been cold enough yet to work the magic of turning green to gold, russet, scarlet. When we’re there, on the shore of Ullswater, green is still predominant, although touched with gold here and there. Then we round a corner in the path and are met by a massive tree in a blaze of red. The leaves look almost hot. I think it might be a field maple, but I’m not sure.
Later, we take the round trip on a lake steamer and at intervals other blazing beacons light up the shore. The lake begins as still as glass, mirroring the clouds and the fells. ‘The mountain’s shadow bruises the lake (Kathleen Jones). The wind shifts. The weather is ‘mending worse’ (Norman Nicholson). It rains. We don’t care. We are not about to duck into the fuggy saloon and miss the spectacle of weather sweeping across the sky, the fell-tops disappearing into the clouds, then coming back into view, flooded with sunlight. We are in ‘a watercolour landscape: pale, runny, luminous, where cloud and rain confuse sea, land and sky, smudging the boundaries.’ (Tess Cosslett). 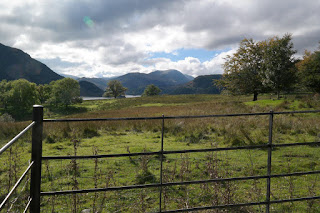 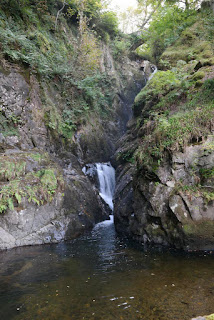 This year has seen unhappy changes for some of us. John K is battling with early signs of Parkinson’s. John M is recovering from a stroke. My back is crocky. Last time, we all took the steamer to Howtown and walked all round Hollin Fell. Some of us were stragglers, but we all ended up in the pub together, eventually. This time, only one intrepid walker did the Hollin Fell round walk and a couple of people tackled Aira Force. We all walked the relatively flat top end of the lake shore.

Back at our shared cottage we ate, drank and were merry and watched the robin gorge on rowan berries, just outside the window. We’ll be back next year in whatever shape, to celebrate long years of friendship and pay tribute to our beloved dead. And no doubt I’ll still be wishing I were a poet, rather than a person who writes poetry – and still revelling in the words of the true poets. Thank you all. 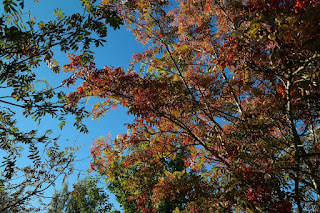 Winter Light by Kathleen Jones, in Not Saying Goodbye at Gate 21, Templar Poetry 2011

Old Man at a Cricket Match by Norman Nicholson, in A Local Habitation, Faber and Faber 1972

By Train to Eskdale by Tess Cosslett, in Angels of the North, Angels, 2000.

Wendy H. Jones said…
What a beautiful thing to do. Sandra. And Cumbria is such a lovely place to remember a friend. You are definitely a poet with your prose being poetic. Thank you for sharing
20 October 2016 at 08:30

Dennis Hamley said…
I agree with Wendy. This beautiful prose, wistful, mournful, packed with feeling and in the fullest sense elegiac, is the work of a true poet and not just someone who writes it. And yes, I am at a stage of life where I recognise every emotion in it and find them sad and inevitable - but also good and necessary.
20 October 2016 at 10:40

Kathleen Jones said…
Such a beautiful post. The trees are wonderful at the moment. Many thanks for the quote SAndra!
28 October 2016 at 15:44