By Leverett Butts - October 23, 2016
Author's Note: As you may have noticed, I am not your usual blogger for the 23rd. Lev's birthday is this weekend, so I told him I'd be glad to give him a month off. I am currently unemployed (in order to devote time to my political pursuits), so I figured I had time enough to devote to one post.

My name is Lucky Butts, and I am Lev's dog (or rather he is my person). 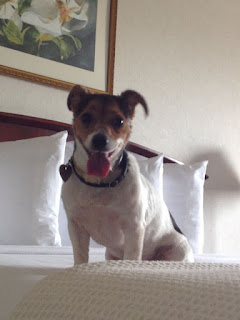 I am an eight-year-old Jack Russell Terrier, but more importantly, I am your last, great hope for our political future.

I am currently running as the Liberterrier candidate in the current elections. However, I am sure that you have not heard of me since the debate commisions and the mass media have all conspired to keep me from the public eye.

Since I have been denied my moment to shine in the debates, and since I don't have the funding for a cross-countries stump tour, I have chosen instead to hi-jack Lev's post make my case here and allow Lev a much-needed vacation.

So without further ado, I give you the top five reasons to vote for me in your local election:

5. I am also running for British Prime Minister

If you are like me, you are really tired of having to follow two separate elections each cycle. I understand a lot of you are from across the pond, and while it's true, that our two countries started off on the worng foot, we have come a long way since then. In fact, our national elections not only affect our own countries, but each others as well. We are often teamed up as if it were a special crossover issue of DC comics.
We can have those times again, only streamlined. As both the president and the prime minister, our countries can totally be BFF's again. We can be on the same page and never have to worry about the dangers of a complete tosser being elected in either country and screwing it up for both of us. 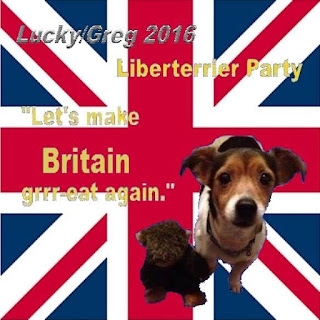 4. I am perfectly able to listen to commands, yet still make up my own mind whether to bark at my enemies or not.

You don't have to worry about a leader who relies too much on their advisors and is incapable of making up their own mind (I have even heard some prefer to consult their kitchen storage if you can believe. Clearly deranged, but we elect them time after time!).

By the same token, you need not fear the politicain who is so self-involved that he listens only to himself without recourse to others.

As your commander-in-chief, I promise to listen to all my handlers advisors, and only then, after hearing what they have to say, will I run off on my own (especially if the door is left open).

3. I'm cute as a button and would make a fine image should we decide to update our currency.

2. I am physically incapable of sexual assault, so no White (dog)House shenanigans.

I still don't understand why grabbing cats is such a big deal, but apparently it is linked to frisky tomfoolery, so let me assure you that my people have made sure that that cannot be an issue once I am in office.

Although I still reserve the right to wrestle with the cat if he comes with us to DC. When we are in London, even that will not be a problem since the Brits have the good sense to ban foreign cats from entering their borders.

And the number one reason:

1. If you don't like my presidency, my four year term is only like seven months for you.

It's slightly longer for the UK, just over eight months, but regardless, you can both get somebody new before the year's out. 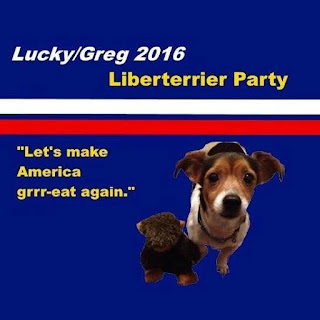 glitter noir said…
Finally, with all the hoopla and Trumpian nonsense, a bark of reason and sanity. We've seen many politicians with their tails between their legs--but none with tail upright and wagging like yours.
23 October 2016 at 16:11

Jan Needle said…
I catch you grabbing my cat or indulging in any other sort of feline tomfoolery I'll do time for you, right? I've had enough trouble with my pet toad, Ronald T.Rump of Rump Hall.https://www.amazon.co.uk/dp/B01M11D7GE The Feds are on the case, Lucky, and luck can always run out. Capeesh? (Or whatever.)
23 October 2016 at 18:04