Off Grid - Would it work for you? Kathleen Jones is off-line.

By Kathleen Jones - October 05, 2016
Terry Pratchett used to work on six large computer monitors mounted in a bank in front of him.  Each one had a different screen - Google, 24 hr news, a couple of books in various stages and anything that interested him and was relevant to his work. He loved that inter-action, being connected to a wider world than his small study.
Other writers find they can only work on a computer not connected to the internet.  Best-selling author Margaret Forster was even more extreme, but not unusual, in not working on a computer at all. Pen and paper are still very much in fashion and there are a number of studies that seem to show that writing by hand is not only beneficial, but can be more creative than tapping a keyboard.

I don’t think I’m alone in sometimes finding the relentless white noise of social media a burden.  Publishers expect you to blog and tweet and answer emails pretty sharpish. If you self-publish you’re locked into a schedule of unending self-promotion.  I have a smart phone now in order to cope while travelling, and even when I’m away from my computer, it’s always switched on.

But, for the past week or so, I’ve been off-grid.  TOTALLY.  Cold turkey.  No internet.  No mobile. No land line.  The only sound has been the roar of the southern ocean as it slams into the rocks, all the way from Antarctica, and I’ve been kept awake at night by Blue Penguins having parties in the dune grass outside my bedroom window.
It felt rather strange at first, not to know what was happening in the world, not to know what my family and friends were up to.  Were they all right?  What would happen in an emergency?  There was also a sense of guilt; mother-hen not available for her chicks.  But after 24 hours there was a feeling of real peace and space.  Walking along the beach alone, with only the wind and the sky and the sea, was very therapeutic.  I’ve played endless games of monopoly, cricket with my grandchildren, drunk some very good New Zealand wine and eaten locally produced food free from added chemicals.

And I feel a new person.  We’ve been staying down on New Zealand’s most southerly coast on an exposed strip of land between the beach and wild bush.  There were Blue Penguins and sea-lions and dolphins in the sea and bell-birds in the trees behind us.

Being so close to the natural world is one of the most beneficial things I know.  Our world of compulsory connection is very stressful.  We don’t get enough time to think.  And there’s too much pressure, particularly on creative people.  It’s not good for our mental and physical health.

I haven’t written a line over the past 5 days, but it doesn’t matter.  The batteries have been re-charged and, once the jet-lag burns off, I’m sure I will be fizzing with ideas.  There was a certain museum with a stuffed possum and an early settler’s wedding dress, her wedding china, photographs and letters and diaries.  The names were the same ones that I found engraved on the stones in a tiny graveyard at the top of the cliff facing the sea.  And there was the story of a shipwreck with the loss of over a hundred lives due to a captain’s negligence - the rescue bodged by someone not putting ‘Urgent’ at the top of a telegram.  Only 60 bodies were recovered and they, too, are buried beside the sea, most of them unnamed and unidentified in a mass grave. 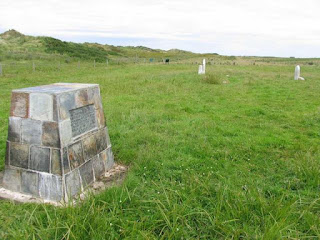 When I get home at the end of the week, I’ve made a resolution to spend less time on line and more outside in the natural world.  It’s full of stories and wonderful things. Not to mention the penguins.

Kathleen Jones is an award-winning poet, biographer and novelist.  You can find her books at www.kathleenjones.co.uk    She blogs at A Writer's Life, is on Twitter as @kathyferber and you can also find her on Facebook when she has the time.  Her most recent book is Travelling to the Edge of the World, an account of a journey to the remote islands of Haida Gwaii.

JO said…
I know where you were! And it's stunningly beautiful.

I go off grid from time to time when I'm travelling - but always warn my daughters and they have a number they can reach me on (or someone who knows more or less where I am) - and the whole social media thing can wait. I'd rather come home with stories to tell rather than trawl though clips of cats. And if I sell fewer books - well, that's how it is.

And even at home I try to keep the internet at bay. It's not on all the time - only when I need it. Somehow it sucks life of me - as if what's 'out there' is more important, or more valid, or more urgent, than the reality around me.
5 October 2016 at 09:43

Katherine Roberts said…
I know exactly what you mean, Kathleen - part of the reason I ran screaming from Facebook!

I write fiction by hand. I went back to it a few years ago because I discovered I can get much more first draft material written that way. Once I get the words on a screen, I immediately start fussing with them and the whole thing then grinds to a halt. I don't think it's being online as such... I don't have the internet connection switched on when I'm writing... just being "on screen" that seems to kill the creativity for me. It's fine for editing and working on later drafts, though.

Then once the internet is turned on, of course, there's all the social media and other distractions... yet it's a very necessary part of publishing these days, even if you have a publisher. I suppose the answer is to be strict with yourself and ration time on social media sites, etc. As long as you're not addicted, they can be useful.
5 October 2016 at 15:36

Kathleen Jones said…
That's really interesting Katherine. There's something about the fluidity of text on a screen that alters how you work with it. Like you, I use it for editing, but not for the creative bit.
6 October 2016 at 18:11