To travel hopefully is a better thing than to arrive. 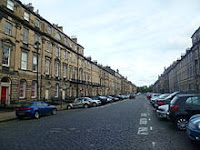 So said the famous nineteenth century Scottish author, Robert Louis Stevenson, who certainly knew a thing or two about travelling. Born in Edinburgh and suffering from ill health all his life, he was only too glad to forsake the 'draughty parallelograms' of that chilly city's New Town, with its grid of Georgian terraces. He and his long-suffering wife braved many voyages to what was then called 'The New World'. In the last years of his life, he lived in the merciful climes of Western Samoa, where he was known and loved as 'The Tusitala' (the storyteller).
He is buried there, a quotation from his own poem on his tombstone:
Home is the sailor from the sea
And the hunter home from the hill


There used to be an inn in Edinburgh called The Tusitala and one whole floor of the city's Writers' Museum in the Royal Mile is given over entirely to RLS, as he is affectionately known in his native city.
It was there that I began my quest for the subject of my fourth novel. I knew that I wanted to set it in the Inner Hebrides (an area I know and love) and explorations on the Isle of Mull had led me to the little tidal island off the south tip of Mull called Erraid. Then childhood memories of reading Kidnapped by RLS stirred: in that novel, the young protagonist, David Balfour, is shipwrecked on Erraid and famously spends three desperate days and nights, soaked and starving, before he discovers the causeway over which, at low tide, he can cross and get on to Mull. RLS knew about Erraid because his father and uncle were known as The Lighthouse Stevensons, responsible for the building of numerous lighthouses around Scotland's rugged coast. His father lived on Erraid for several years while two lighthouses were being built out in the Atlantic to warn ships of the very rocks that wreck David Balfour's boat in the novel.

Finding my way on to Erraid, tramping over it to 'David Balfour's Bay' (the one RLS has him come ashore on) filled me with excitement. You know that moment when you get a glimpse of what your next book will be? You have no characters yet, no plot, no plan; but you just know you have conceived, that the baby will live and grow and one day be born. You don't yet know the gender/genre and you have no name for it but already you love it, it is part of you. That's what happened to me on Erraid one sunny June day in 2012.

Back home on the mainland, I pursued my fascination: I re-read Kidnapped; I researched RLS and his family; I fell in love with lighthouses and read all I could find about them; I visited places and I talked to people; I swallowed up legends and whole chunks of Scottish history; and I gradually - after a few false starts - came to know what I was going to write. It has indeed been a process of hopeful travelling, feeling my way into the era (1920's), the island culture and the lighthouse lifestyle. My characters, once created, have led me on to places, events and insights that have opened my mind and excited my soul. Now that the book is written and soon to be published, I am going to miss them so much!

Writing a novel is such a journey, is it not? We set out in high spirits, full of adventurous confidence. We run into unexpected pitfalls and even doldrums. We get lost and waste time in fruitless side-tracks - but sometimes find these more interesting than the original, planned route. Like Kipling, we meet with Triumph and Disaster (and treat those two impostors just the same). And, just as we think we will never reach journey's end, we see the lights of home and make a dash for the tape. (sorry - mixed metaphors).

Today, I set off on yet another part of the journey. My period authenticity guide is a redoubtable Highland lady, the archivist at the Mull Museum in Tobermory. She has been reading my first draft and now I have to find out how much I have got wrong (despite all that research). It feels a bit like getting back a school assignment from a kindly but exacting teacher.

So with not a little trepidation, I am heading north and west to spend tonight in Oban and catch the Monday morning ferry to Mull. Weather permitting, I will have the consolation of breathtaking scenery. But, whatever the weather, I know I will feel the adrenalin rush of the inveterate traveller. 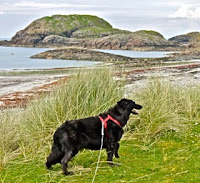 And I will have my best friend with me.

Wendy H. Jones said…
Beautifully evocative. I loved hearing about RLS and looking forward to reading your book.
2 October 2016 at 08:38