Will the real Mr Darcy please stand up? Ali Bacon mourns the end of an era

By AliB - October 22, 2016
I’ve just been to see Bridget Jones’ Baby, which was never going to be as good as the original film(s) but was still good fun and had updated pretty well, even if  some current cultural references were possibly lost on older members of the Monday tea-time audience. (Unlike my companion I at least recognised Ed Sheeran!)
However, this film has also marked the end of an era, that era being the one in which I have lusted and/or romanticised at varying times and in varying degrees over Colin Firth: the original Fitzwilliam Darcy of the wet shirt, Mark in the original Bridget and of course Jamie in Love Actually.

Because he is a fine actor and can turn that kind of charm off and on at will, I didn’t romanticise over Mr Firth in The King’s Speech or other roles, but it did come as a shock to discover that, as far as I’m concerned, as Mark Darcy he has entirely lost his je ne sais quoi. In fact if I had been Bridget choosing between him and Patrick Dempsey, it wouldn’t have taken me less than two minutes to make up my mind.
For this I consider myself a weak and faithless woman, but then all good things must come to an end and at least we now have Aidan (Poldark) Turner to fall back for the odd romantic fantasy. But for me MD’s lack of charisma did detract from the new Bridget and it reminded me of how this just doesn’t happen on paper, in a novel I mean.

BJB has never actually been a book (unlike Mad About the Boy) but if Helen Fielding had written this one, there would have been no problem: however stuffily MD behaved, she could have imbued him with whatever it is that Bridget (and the rest of us) need. But on screen, the pictures (and maybe the actor’s lack of self belief – did he really want to do this?) just got in the way.

Of course we know that’s why books are better than films. Apart from the damage to glorious original texts inflicted by editors and producers, nothing can replace the people and stories that already exist in our own imagination (which I touched on in another way in my St Andrews presentation) can they? My writing teacher, who was an actress in a previous life, considered writing to be the only medium that gives us a character’s inner thoughts. Now you could say that the first person voice-over in the Bridget Jones films takes us into her head. But when Mark Darcy is on the screen we can’t see him exclusively through her eyes as we could in a book, only through our own, and there was nowhere to hide for a not very romantic hero.

Is this really a post about character and point of view? I’m not sure. Even as I write it I’m remembering Colin Firth’s hottest moment - by the lake at Pemberley - was never in any book at all. 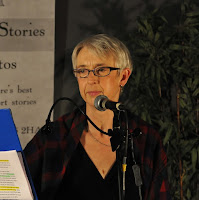 Ali Bacon writes contemporary and historical fiction and performs her work at live events in and around Bristol.

You can find her and her books at http://alibacon.com and on Amazon.

Wendy H. Jones said…
Very good points. I was withering over whether to go and see this movie as I love Colin With as an actor but the update didn't appeal to me. I think you have just swayed me
22 October 2016 at 09:58

Catherine Czerkawska said…
I haven't seen the movie either, and perhaps won't, now. Sometimes - as far as film goes, there can be a sequel too far. Sometimes actors are wise and turn the sequel down. One of my all time favourite movies, Speed, has the most dire sequel that beautiful Keanu Reeves didn't do. He was right - I think that role is unrepeatable. (Even though he's still fit, even now!)

Fran B said…
I'm surprised Firth did this film. He has grown into a wonderful actor in challenging roles and this sort of inane, TOWIE-type tat should be beneath him. Maybe that's just a Northener's viewpoint. The first couple of BJs were quite fun - if completely unrelated to everybody-I-know's world. But now it feels like it's being over-milked. I haven't seen the film. Oh dear, what a loss!
22 October 2016 at 11:42

AliB said…
Oh dear, I have put you all off - it's fine in its light-hearted way with some great gags. Bridget and chums are on song and Patrick D fits the other half of the bill very well.
I think you're right though Fran B., CF should have given it a swerve. He always was a great actor and I think the surprise was more that he did romcom in the first place. A.
22 October 2016 at 16:06

julia jones said…
I'm currently writing about Pride & Pred as chick lit so may need to watch this - in the interests of research, you understand. Thanks very much indeed for this post Ali - may nick a few of your good points. However - while I'm here - can I just remind everyone of the excellence of Valerie Laws Lydia Bennet's Blog? IN the i o r I've just read is a second. Not only did it give me just as many laughs but I also noticed how incredibly cleverly she uses Lydia's activities as a commentary on the plotting process as well as a critique of the JA characterisation (which I did enjoy v much the first time round)