By Cecilia Peartree - January 05, 2018
I have an uneasy relationship with New Year resolutions - and in fact, with New Year in general,  since I can't bring myself to enter into the spirit of it as I feel most Scots are expected to these days, particularly in Edinburgh, the Hogmanay capital of the world. Also, over the years, I've developed a strong feeling that  instead of both Christmas and New Year we should celebrate the solstice, representing as it does the start of the return of daylight to the northern hemisphere. Still, I don't think it's too late to wish anyone reading this a very Happy New Year. 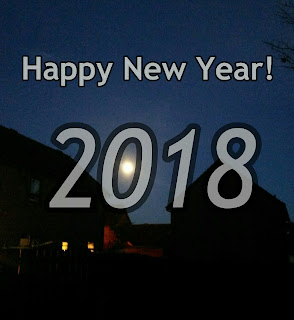 It has taken me a while to think of a suitable resolution for this coming year. My most successful resolution of the past was not to say 'I can't be bothered' and in fact this was such a resounding success that even now, years later, I usually catch myself in time to avoid actually speaking the words, although sometimes I can't help thinking them. So there is no point in making that one again.

Last year's main resolution was not to write so much, and as I finished my edit of the fourth 60,000 word novel of the year on the 31st of December, I think I can claim that one as an equally resounding failure and not really worth repeating either.

Instead I've come up with something that I seem to have already started on without the benefit of making a resolution, so I suppose that's cheating in a way. My resolution is to be more normal.
I can almost hear my family laughing in the background as I type this. What I mean by it is not to try and suppress the creativity or randomness with which I lead my life so that I can merge into the crowd, but to behave like an able-bodied person again instead of someone with a physical disability. I used a stick to walk for almost two years, over a year before my hip replacement and almost a year afterwards, and I realised recently that I had adapted my behaviour and my expectations about what I could do accordingly. So for example I avoided going out if I knew it would mean walking any distance, or going up too many steps, or standing around for long.

I don't suppose I would have hung on to the stick for so long after the operation if I hadn't fallen on my 'other' knee on holiday at Center Parcs and caused it to swell up like a balloon, so it wouldn't then have taken me until New Year to get to this stage.

I am still happier taking a stick with me in certain circumstances, such as icy weather, or large crowds milling about - even just to signal that I would prefer people not to push me over! But within the past couple of weeks, while I've been on holiday from work, I often haven't even thought about taking it out, instead marching along confidently and not stopping to work out in advance whether I will make it to the bus stop, or the café, or the cinema.
It may not seem like much, but as far as I'm concerned, it's the resumption of normal service.
Authors Electric Blog Cecilia Peartree disability Indie authors New Year resolutions

Umberto Tosi said…
I know how you feel. I had to use a cane a number of years ago during a sciatica bout, followed by learning I had arthritic lumbar disks. I'm lots better now but love my walking stick - on custom job I made in particular from a maple cutting. Happy new year.
5 January 2018 at 04:31

Jan Needle said…
Thanks for that, Debbie. I'm sure you're not alone in the feelings you've shared. It's a long time since I wondered where the next Rolls was coming from! I've always felt that writing is a bit like a drug addiction, though - however much I've thought it would be nice to stop, something in my brain (or whatever) drives me to the machine. Like you, however, I've been pondering the things in life I've been neglecting.. In the last two weeks, for instance, I've been wearing my fingers to the bone on my mandoline, worn me lips out on my tin whistle, and horrified anyone within earshot with my singing. Soon be canal boat time, and then I'll even be out of range of t'internet. When I see you at the Blue Cap in three weeks or so we'll share resolutions! Will I recognise you though? Three stone? Bloody Ada!
6 January 2018 at 12:14