I have just finished reading, on my Kindle, Philip Pullman's latest book, "LA BELLE SAUVAGE", the back story to his award-winning Trilogy, "HIS DARK MATERIALS". It has been an enchanted reading journey to which, whenever real life got in the way, I kept wanting to return, so did. That's the spell that really good writing always casts.

The next book on my current reading list will, I think, be very different - Kate Atkinson's "A GOD IN RUINS" (or perhaps not so very different as Philip Pullman, too, classifies Church and Religion as the enemy, but then I don't know the plot so it may not involve that at all). Moving from a passionate involvement with one book to another always feels slightly promiscuous, but then what is life without a bit of delicious promiscuity?

And mentioning promiscuity, for those of you who are, like me, agented, have you ever approached another agent while still tied to your current one? Does the word get out? I've been warned that the agent-y community is small and intimate, like a suburban street with twitching curtains - "Oh look, she's soliciting, mutter, mutter..." - but is it? I'm also old, and definitely not a fascinating debut, so I can't afford to lose the one I've got. 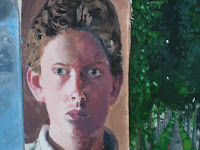 I am, indeed, so old that I have a young teenage grandson who's recently re-discovered his innate talent for drawing and painting, and who has turned three of his old skateboards (he is a passionate skateboarder) into a triptych, with a self-portrait in the middle. Now self-portraits really aren't the same a 'selfies' - they involve a deep and persistant exploration of one's own face, and they often end up looking sinister because the gaze is so intense. I did one years ago, in which I look scarily evil. This was because I was continually looking up at myself in the mirror. There are some brilliantly expert ones in the National Portrait Gallery in London, though, which don't do this, and there are always some incomprehensively clever ones in their BP exhibition in June - ones where mirrors are somehow behind mirrors (don't even ask!) I never miss this, because I've always been fascinated by people's faces, and because the artists are so contemporary and often really young. 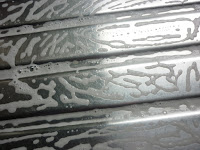 These hieroglyphs on the right came out of my cleaning my draining board this morning. They looked like a curious Oriental script, so I photographed them, but unfortunately my camera also picked up the edge of the window. Still interesting, though, and had me wondering about early calligraphy and bubble patterns in water and streams.

A fairly eminent children's author friend has recently come up against something I can only only describe as censorship by the ignorant. Her book is a story which involves a young girl exposed to verbal bullying, so obviously it contains some of the inacceptably racist language used by the bullies. However, a parent at a primary school complained that the word 'Paki' was used, and the school immediately withdrew the book from its library. The word then got around, the local paper became involved, followed by the sensationalist end of the National Press, and the complaining mum suddenly had a lot of satisfying publicity, while the author's reputation suffered to the extent that a statement from her publisher had to be posted in The Bookseller. I find this very disturbing - do you? Censorship is always suspect.

I was in at the ground floor with the 'Paki problem' when my Guardian Award runner-up My Mate Shofiq was published. It culminated in my being banned from a conference on 'realism in children's books' at a London school at which I was due to be the lead speaker. The headmaster rang me up on a Saturday night to tell me the teachers had held a vote to cancel my Monday visit on the grounds that I was clearly a racist. When I pointed out that the whole point of the book was to attack racism the headmaster said he was well aware of it, but was powerless in the face of a 'democratic decision,' although the invitation had been confirmed several weeks before. This was the first of a fair few similar problems Shofiq (and later books about British racism) faced. At the moment, I'm happy to say, Aneel Ahmed (British Pakistani film-maker) is working to get the book on screen, with the support of many other 'Asians.' Realism in children's books. Hhm.

Yes, it is worrying - and it's not only affecting books. I shall get hold of My Mate Shofiq - heard of it, but never read it. What's the other book, Enid?

There is something alarming close to the horrors of Chairman Mao in all this, and it really, really has nothing to do with racism, and everything to do with self-promotion. Every child knows that bad/unpleasant people use bad/unpleasant language, and realistic books like these resonate positively with kids who are most affected. Those who object are cultural bigots who presumably would have Shakespeare banned from schools on similar grounds (think OTHELLO, and, THE MERCHANT OF VENICE).

Jan, I hope your film happens, and that it's a huge success. I have one currently on the menu, but (maddeningly) it's taking its time.

Tried to edit the above comment, but couldn't find out how - will someone please tell me how? I meant to say 'alarmingly'!