Up and Down Again: an author's tale - Katherine Roberts

Question: What is this?

Answer:
(a) Sales graph of my latest indie-published ebook?
(b) My amazon author ranking (i.e. popularity)?
(c) A midlist author's income?
(d) Sales graph of a traditionally published title in the month following its publication?

If you've been writing and publishing for a few years, you might well be tempted to answer 'yes' to all these.

But you'd be wrong.

This is what I was actually doing when I created the above graph:


Before you get too envious, this photo was taken on one of the sunny days when it had snowed during the night. We also had days like the one that created the graph below, when skiing was pretty much impossible because the weather was too windy for most of the lifts to run, and then a tree fell on the single chairlift that was running so it was forced to shut too, meaning we had to walk half an hour back to the village in ski boots carrying our skis, in the rain.


Nobody was stopping to take photos that day, except of the tree on the chairlift, which was a similar situation to this Youtube video - although our tree was bigger so that it caught across the wires and had to be chopped down by the army before the skiers trapped on the lift could be rescued. (I was not on it at the time - the attendants saw the tree fall and stopped the lift before anyone could get hurt.)

The truth is, whether you're skiing or writing or publishing (or indeed doing many other things in life are reliant on conditions outside your control), sometimes the climate is simply against you. Hence my choice of title for this post, influenced by a certain well-known hobbit's There and Back Again... Up and Down Again, a pattern the experienced writer comes to know all too well.

On the mountain it's usually the elements you end up battling, which are difficult to forecast more than a couple of days ahead, and even then are prone to unforeseen change - our final day's skiing in the sun was meant to be another wash-out rainstorm. Instead we created the first graph, shown here again with its totals: 45 km of pistes skied and 26 km of lifts ridden, making a total of 7,357 vertical meters.


Publishing has a climate too, which can be just as unforgiving and just as beyond the average author's control. And sometimes - as in the case of lift closure due to falling trees in a storm - doing what you planned to do is well nigh impossible, barring extreme measures such as putting skins on the bottom of your skis and walking up the mountain - three hours of climbing for ten minutes of downhill in snow-turned-to-glue-by-the-rain, anyone? That's about as fun as it sounds. About as much fun as taking three years to write a book when every word screams "give up!", only to have your publishers turn it down because they need to publish the latest hot new debut (preferably several of them) in order to survive. For a number of years now, a toxic climate of sale-and-return coupled with high discount sales has made it difficult to maintain a long term career as a non-celebrity author.

In the mountains, those skiers who are in a ski resort for the whole winter - the seasonnaires - tend to stay in bed when the conditions are against them. They know the climate will improve another day, the snow will fall, and afterwards the sun will shine again. So, contrary to many writing blogs which advise churning out a set number of words each day and publishing a book a year - or a month, or a week, or whatever crazy indie publishing target you have set yourself - I am going to give you permission to stay in bed on the bad days.

You won't be writing very much on those days, but the writing has not gone away, I promise. It is still there, and you have a lot more experience of the publishing process than when you were a debut author. You can still write just as well as before, despite the climate (and editors and agents) saying you can't. You can even write but not publish for a while. And meanwhile, conditions out there in publishing are changing in unforeseen ways. Watch them through the window from the comfort of your log cabin, and save your energy for the days when it has snowed in the night, the lifts are running and there are no falling trees to knock you off halfway up, so you reach the top of the mountain just as the sun rises, and swoop down through the powder feeling as if you are flying, to stop at the bottom with a big smile on your face ready to take the next lift up... 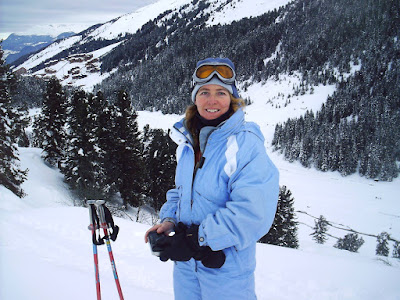 
*
Katherine Roberts won the Branford Boase Award in 2000 for her debut fantasy for young readers Song Quest. Her latest novel for older readers is Bone Music: the Legend of Genghis Khan, coming from Greystones Press in April.

You can sample Katherine's historical fiction for older readers with this short tale of Queen Boudicca's rebellion, available as a FREE DOWNLOAD from the links below.

Anonymous said…
I am so glad that's not you on the ski lift! The voices on the video sounded Russian, so I guess it must have been in Courcheval or St Moritz. Ups and downs of writing/publishing nicely compared to skiing, which can be the most glorious thing imaginable on a beautiful day, and sheer, terrifying, lonely hell in a whiteout.

And thank you for my favourite piece of writing advice EVER: just stay in bed every now and then. Oh yes.
21 January 2018 at 14:55

Enid Richemont said…
Oh yes, oh yes, Katherine. Going through a weird and far too lengthy writing slope right now, as you might gather from my blog later next week. Feel like hibernating right now.
21 January 2018 at 18:00