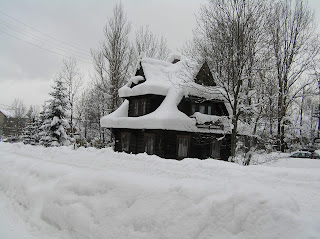 Personally, I love the snow, but I know not everyone feels like that. Something that can transform the world overnight into a fairyland (as long as you’re not in the middle of a city) is just simply magical. But I think part of it is a childhood memory of my first time ever trip abroad. It was with my father in 1964, when I was fifteen. We went for a month, over Christmas and New Year, and the Cold War was in full swing. I stared open-mouthed at soldiers with submachine guns, at bullet holes in windows, at streets filled with trams and lorries and horses and carts, and hardly a car in sight other than those driven by party officials. It was my father’s first visit back to the Poland he’d left during the war, and it was a dramatic experience. I was lucky in that my relatives lived in Krakow, a beautiful historic city – but better still, for me, was that it was within reach of Zakopane, in the Tatra mountains. We took the train, which zig-zagged uphill for four hours (it’s two hours by bus these days) carrying two pairs of pre-war wooden skis. As the weather grew colder and the trees began to be dusted with snow I caught my first sight of real mountains, and I was hooked on foreign travel from then on. When we came out of the station to my astonishment and sheer delight the taxis turned out to be horses and sleighs. We hadn’t arranged any accommodation, so my father asked the cabbie if he knew somewhere we could stay. Off we went, zipping along the snow-covered streets until we came to a little wooden house amongst the trees, where we spent the following week.

I’ve been back several times since, and I still get that thrill as we approach Zakopane and smell the woodsmoke and spot the mountain called Giewont in the distance. Those sort of memories are indelible – and the easiest to write – because I was so aware of everything at an impressionable age, and early memories stay with you the longest, especially if they involve all the senses. The sight of the snow, the touch of snowflakes, the sound of jingling harnesses, the taste of pierogi, the smell of leather.
I’ve also been to Iceland and Norway since, and used them in books I’ve written. One of the aspects of C.S.Lewis that has always impressed me was the way he used different environments in The Chronicles of Narnia, which makes each book memorable and separate from the others. The Lion, the Witch and the Wardrobe is winter in a temperate country. Prince Caspian is the same environment, but in summer. The Horse and his Boy is desert. The Voyage of the Dawn Treader is a sea journey. (Yes, all right, it’s also the Acts of the Apostles). The Silver Chair is underground. The Magician’s Nephew starts in historical London, and The Last Battle is the afterlife. The only environments he didn’t tackle were jungle and outer space! (Although he did write some adult science fiction.)
In the Divide Trilogy I tried to do something similar. The first book has a temperate setting, the second goes into the desert – and the third is my arctic setting, Jinx on the Divide, which I self-published as an e-book. Rhino is the school bully, who finds himself catapulted into the magical world on the other side of The Divide. 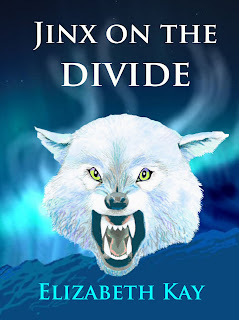 The landscape was changing, for they were going uphill all the time. They passed gigantic frozen waterfalls, and lakes waxed with ice. There didn’t seem to be any trees any more, just great expanses of shoulder-high bushes with silvery trunks and snow-laden branches.
Although Rhino had seen tundra on television, actually being in such a bleak environment was a very new experience. The sunrise was far more protracted than it was in England, and the light was strange – a pearly lilac-grey.

Gradually the greyness seeped away, until the sky was streaked with turquoise and pink and the sun appeared, red and raw. They stopped at a roadside café for breakfast. When they came out a blizzard was in progress, but five minutes later it was bright sunshine again. A bit later the sky darkened to a bruise, and then the mountains disappeared behind a veil of white. Rhino pulled up his hood, but once again the snowstorm didn’t last long.

The publisher asked me to write some notes for the back of the book about how I researched the landscape, and this is what I said: 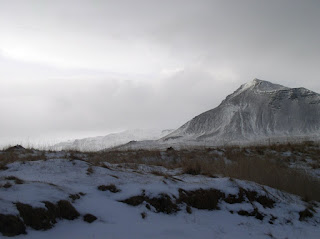 The landscape is bleak, but I like bleak. Black volcanic soil, with areas of yellow-brown dead grass. Patches of snow sculpted into dunes by the wind, and sprinkled with earth along the ridges, like the powdered chocolate on the froth of a cappuccino coffee. In the distance, terrines of striated rocks with dustings of snow clinging to them. Now and again we see shining lace curtains of icicles festooned across the rock face at the side of the road. When the sun shines, the icicles start to melt. Particles of mud run down them like beetles, the ice acting as a magnifying glass. When you walk across the snow it’s like walking across a crème brulée; sometimes you crack the thin layer of ice on the top, and sink into a deep marshmallow drift.


Next time it snows, make sure you go outside both in the day and at night, and write down your impressions as soon as you get back inside, for the memories melt pretty quickly once you’ve left the subject matter behind.

"The winter is austerely beautiful, like a winter queen. Some mornings the sun cracks the frozen sky in a thin gold band and hovers there for hours, as if holding its breath." Yes, the north has incredible impact n those open to its miracles.

Your winter stories convey the mystery, magic and sometimes menace of snowscapes, and a childhood rich in imagination. I love the snow too - and hesitate to those who curse it every year in Chicago where I live now. Snow evokes my own special New England childhood memories, and - when I lived in California - trips into the high Sierras seeking the white, cold crystalline experiences of it at altitude.

Very jealous, Umberto. It seems that the whole of the UK has been under snow recently - except for the southeast, where I live, which hasn't seen a single flake this winter! I'm off to Russia in early April, which stands more of a chance.

I never thought about C S Lewis using a different season/environment with each Narnia book but of course you are quite right. And the Voyage of the Dawn Treader as the Acts of the Apostles.... what? Tell me more!

Thanks for this great post with wonderful crisp, glittery evocation of winter snow..

gripped by your Polish memories. thanks