Santa and his coat of many colours by Griselda Heppel

By Griselda Heppel - January 01, 2018
When my children became teenagers, they told me something that shattered my illusions about Father Christmas.  Not whether he existed or not – even I knew the answer to that – but what he’s supposed to wear. The traditional red suit with white cuffs matching his snowy beard is apparently not traditional at all, but the result of a cynical advertising campaign by Coca Cola in the 1930s, forever associating the plump, jolly, big-hearted Santa Claus with the fizzy drink. Until then, Santa had boasted a lean, trim figure, clothed in a long, green robe.

Well, there was only one answer to that. Utter nonsense. Teenagers think they know everything. Father Christmas/Santa Claus is depicted wearing red because he’s always worn red. Look at Christmas cards, films, book illustrations, department stores (all post 1930s, I admit). My mind flew back to my German childhood in the 1960s … and uncovered a memory till then suppressed.

On 6th December every year, Nikolaus, accompanied by his servant, Knecht Ruprecht, visited my primary school. While Ruprecht, lugging a sack bursting with goodies, wore brown or black, I forget which, his tall, thin master had on a long robe of dark – green. At the time I was far too excited by his distribution of sweets and lebkuchen to wonder at the colour. Perhaps also, the (sadly, rather poorly printed) illustration of Nikolaus (right) in my reading book, Mein erstes Buch, had prepared me for just about any other colour than the one expected. 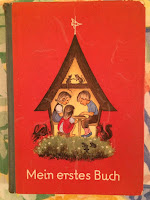 My children, it seemed, were right. Germany in the 1960s would have been relatively unaffected by Coca Cola advertising; here was Santa Claus (or St Nikolaus) as he had probably been portrayed for hundreds of years. Green may have pagan connotations, linking the 4th century St Nicholas with the ancient midwinter Yule festival, celebrated throughout Europe.

In Charles Dickens’s A Christmas Carol (1843), the ghost of Christmas Present has much in common with the figure of Father Christmas: a jovial, generous spirit, surrounded by delicious food and drink. Yet John Leech’s famous illustration shows him not in scarlet and white, but in a green robe, crowned with a holly wreath. And as for the blue-clad Nikolaus in my reading book…  in 19th century Germany, a tradition of the Weihnachtsmann grew up, with the ‘Christmas man’ wearing the colour most associated with the coldness of winter. Santa’s coat could be many colours, it seemed. Just not red.

Ha,  I didn’t give up that easily. A trawl of the internet revealed the following: 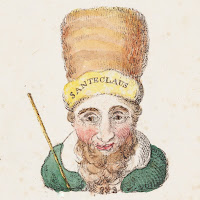 1. In 1821, William B Gilley published The Children's Friend: A New-Year's Present to the Little Ones from Five to Twelve. Containing an anonymous poem, Old Santeclaus with Much Delight, this small paperback was illustrated with eight coloured lithographs, in which one can almost see Santa evolving into today’s familiar figure, since while one illustration shows him dressed in green (left), two others have him in bright red, trimmed with white fur (below). 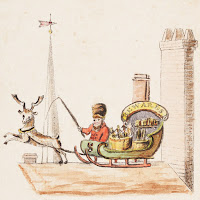 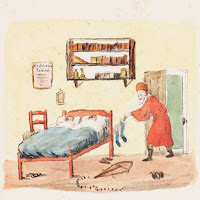 2.    In 1823, the far more famous Twas the Night Before Christmas by Clement Clarke Moore portrays Santa Claus as the cheery, red-cheeked, well-rounded figure instantly recognisable today: ‘He had a broad face and a little round belly, That shook, when he laughed, like a bowlful of jelly. He was chubby and plump, a right jolly old elf…’

3.    In 1843, the Cornish Quaker and diarist Barclay Fox described a family party which included the ‘venerable effigy of Father Christmas, with scarlet coat & cocked hat, stuck all over with presents for the guests.’

So while Coca Cola may have done much to spread this particular image of Santa, we should cut the multinational company some slack (not a sentiment one sees often these days). Father Christmas had been steadily reddening on both sides of the Atlantic for nearly a century before their advertising campaign began.

The tubby, rosy-cheeked gentleman in holly berry red and black boots, driving a sleigh pulled by reindeer, is the Real Thing after all.

Susan Price said…
Interesting post, Griselda. I think the truth is, Father C was always dressed in collours associated with his season - blue for cold, or green for holly and ivy, or red for holly berries.

And 'Father Christmas', rather than St Nick or Santa Claus, was a character in village mumming plays - 'Here come I, Old Father Christmas.' I suppose he would have been dressed in whatever came easiest to hand, or whatever had been stored in the dressing up box. It was only mass publication that 'froze' him into one image.
1 January 2018 at 14:33

Umberto Tosi said…
Thank you for sorting all that, Griselda. I learned a few things I hadn't known even though I own a Santa suit, played a "real bearded Santa" publicly and written a novella spun off the experiences. Maybe I'll try green next winter. Anyway, your post was a delight. Happy New Year!
2 January 2018 at 02:55

Anonymous said…
Thank you both - glad you enjoyed it! Yes, I'm sure that was how it used to work, that Father Christmas wore colours associated with the season, or even just what came to hand. Coca cola's effect wasn't to change his traditional image but, as you say, Susan, to freeze it, so that now any portrayal of him in green or blue will be seen as 'wrong'. And that's what we've lost.
2 January 2018 at 09:10