Death and angels by Sandra Horn


It’s a bit clunky and sounds much better in the original German, but it gives a flavour of what music may mean. I’m writing this still on a high from days of the glorious stuff, after one of the great joys of our year, the Purbeck International Chamber Music Festival. It’s brilliant!

It started this year with three concerts in three venues in one day, beginning with Schubert’s Winterreise - sung by a mezzo, which is unusual, I think. She was absolutely wonderful. We were given the words in German and English – great idea. The final song is Der Leiermann, a haunting, spine-tingling evocation of death as an old man playing a hurdy-gurdy in the cold. No-one is listening, and the dogs growl at him. His fingers are so stiff he can hardly play, but he does the best he can, and the singer asks him, ‘Strange old man, shall I come with you? Will you play your hurdy-gurdy to accompany my songs?’

It’s a long way from death as The Grim Reaper or Old Snatch, or the Erl King for that matter. The only other similar(ish) piece of music I can think of is Sibelius’s Valse Triste, where the dying woman is seen by her son to rise up from her bed and dance in kindly death’s arms, becoming a young girl again as she leaves her old body. It’s gentle and haunting, but unlike Der Leiermann, wordless.

Later in the week, after the music had ended, we went to RSPB Arne. It’s a magical place and ospreys are nesting there – among hordes of other lovely birds, I should add. We sat for a while beside one of the lakes, watching the wading birds and listening to a curlew singing, as I fancied, the start of a farewell song. There were lots of people trying to spot an osprey. Apparently there was one sitting in a dead tree but you couldn’t see it unless it moved its head. We couldn’t see it at all through quite reasonable binoculars! I watched all the people focussing so narrowly on the tree while missing everything else around them and this popped into my head:

The angels keep their ancient places; -
Turn but a stone and start a wing!
‘Tis you, ‘tis your estrangéd faces,
That miss the many-splendoured thing.

It’s from Francis Thompson’s poem In No Strange Land, and I misremembered it – I thought it was ‘your averted faces’, which is why it seemed to apply to the osprey-spotters. They were missing  egrets, curlews, greenshank, cormorants (or shags, whichever – you know, the ones that lay their eggs in paper bags), ants, beetles, butterflies, etc.  There was a rowan tree blazing with berries almost in front of us, but everyone was peering at the dead one with the almost-invisible osprey. Bagging a trophy instead of basking in the glory all around. Missing the angels.

So, no photographs of ospreys, but here's a random wren from my garden. So small, so easy to miss... 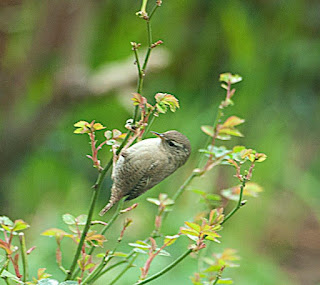 What ever is she on about now? I hear you cry. Death? Angels? Has she finally flipped, poor soul? I hope not. Something about the scenery, the music, the sunshine, the sea, the days of freedom from the tyranny of my computer, gave me space to ponder; got me musing about how we personify the ineffable, the invisible, the mysterious. We grasp at them by giving them words, music, images we can relate to in some form or another. Even when we have a scientific explanation for some phenomena, it doesn’t stop us holding a magical one at the same time – rainbows, for example. I know about raindrops acting like prisms and splitting the ‘white’ light into its components, and I bet Alice Oswald does too, but in her Hymn to Iris she tells it like this, capturing its transience:

Quick-moving goddess of the rainbow
You whose being is only an afterglow of a passing-through
Put your hand
Put your heaven-taken shape down
On the ground. Now. Anywhere.

Likewise, I could give you an explanation of the aurora borealis, involving solar wind, charged particles, magnetic poles, but it is also firefoxes swishing their tails across the sky, mirry dancers, spirits leading souls to heaven and a myriad other images. These things are not ‘true’ in a scientific sense, but they hold another, important kind of truth. We are, in Yeats’s words, the music makers, the dreamers of dreams, and we just can’t help conjuring images to give form to and illuminate all the things in us and around us. Thank goodness.

Here's a random sunset, or whatever you want to make of it: 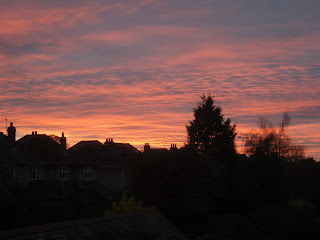 Susan Price said…
Lovely post, Sandra -- and I'm glad to see the random wren as my garden's wren has been AWOL this year. Previously it was anything but random, buzzing about and yelling every day but this year -- nothing.
20 September 2018 at 11:25

Umberto Tosi said…
Thank you for sharing the stuff of dreams with us. I listen, and I would sing such songs if I had the voice. Schubert's lieder move me, in particular. Yes, we are the music makers in whatever forms our creativity takes and our gardens render.
20 September 2018 at 17:11