Here, in the UK, we’re always talking about the weather. It’s part of our DNA. Almost an international joke. But we talk about the weather because it’s an important and essential part of our lives. It affects our mood and our health - and sometimes even our very survival.

Weather in our writing is an essential part of the setting. It can affect the way our characters behave and feel – just as it affects us. But sometimes the weather functions in a more symbolic way – in my latest novel, Here Casts No Shadow, the falling snow at the beginning of the book presages a change in the heroine’s life.

The tank sped up. I never realised a tank could move so fast. Grey smoke poured from its exhaust and the mounted gun swung round in our direction. I yanked Pearl’s arm and dragged her in the direction of the trees. Breath steamed out of our mouths. The snow was glassy underfoot where it had been trodden down and we ran and the trees were far away and how thin they were.

Snow is important throughout Here Casts No Shadow, particularly in the first chapter. It affects Mira’s mood – at first there is excitement as she and her younger sister look at the falling snow and then as they run outside and make snow angels. Later the snow becomes dangerous and sinister, and even the snow angels take on a different presence.

I also ‘book-end’ the snow theme – here it is again at the end of the novel – this time as a symbol of hope. I fly down the steps, light as the snowflakes that fall from the city sky. This is now. This is home.

The snow also features as a symbol of death – its white colour – like bones – its searing cold. However, the snow also has a positive role to play in the book. When it snows hard in Mira’s town the jets cannot fly and drop their bombs. It eliminates Mira’s footsteps. In these instances the weather affects the plot, as it does in many stories. A storm grounds a group of people in an airport. A fire burning after months of hot, dry weather, causes people to flee.

Think also of books like Peter Hoeg’s Miss Smilla’s Feeling for Snow, where the snow also plays a vital role in the plot and feeling of the book, or The Long Dry by Cyan Jones set in a long, hot, arid summer. Because of the weather the grass is sparse and Gareth, struggling to continue farming in his west Wales home, wakes to find one of his heavily pregnant cows has wandered away. Another has dropped a stillborn calf - this recalls the repeated miscarriages of Gareth's wife, Kate, now nursing only tension and depression. Or take Megan Hunter’s book, The End We Start From, set in a flooded world.  Here the heroine has just given birth and is flooded with milk, while the waters rise around the hospital.

Writing about the weather isn’t always easy. Because it’s so much part of our lives we can often fall into clichés – lashing rain, baking summer days, the wind groaning in the trees. One way of avoiding this is to write not of the weather itself but the effect it has. Or we can simply state, ‘it was raining that day…’ and get on with what else we want to write about. 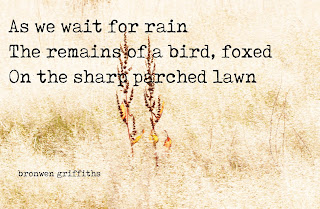 So…don’t ignore the weather, even if it’s hard to write. It’s essential to enable the reader to imagine where he or she is. But don’t overdo it either. Because when writing about the weather, as with everything else in novel writing, less is nearly always more.

Bronwen is the author of Here Casts No Shadow, 2018, Not Here, Not Us – stories of Syria, 2016 and A Bird in the House, 2014. Her flash fiction has been widely published. She’s currently editing a book set in a fictitious Dungeness – in which a woman is obsessed with rising sea levels.

So true! Thanks for this insightful reminder about the power of something we writers can too often relegate to background - weather both as a plot element and a metaphor for the inner states of consciousness. You got me to thinking about other instructive literary, weather-as-character examples e.g. - the cold in Nikolai Gogol’s “The Overcoat," the hurricane in Zora Neale Hurston’s “Their Eyes Were Watching God,” the snow in James Joyce’s “The Dead,” the relentless, metaphoric and too-real mud in Dickens' "Bleak House," and, of course, the tornado that takes Dorothy to Oz in Frank Baum's magical classic.

As a crucial ingredient of any story, the weather is often underrated, so this is good to read. I've deliberately set each of my children's books in a different term of the school year, partly so I don't keep repeating the same kind of weather descriptions but also because a story set during long summer days will have a different atmosphere from one set in windy, rainy weather when the evenings draw in.

The great thing about living in the UK is that you can have all kinds of weather even in the summer (except possibly snow after June) which can come in handy. Though I do try not to resort to what my children used to call Enid Blyton weather - glorious sunshine interrupted by violent thunder storms!