Save the Cat! - book recommendation by Katherine Roberts 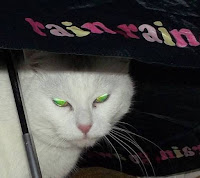 Like many writers, I have a cat living with me. At least, she lives with me when she feels like it... which means when it's feeding time, or when she's had enough of being wet and cold and fancies a warmer place to sleep. 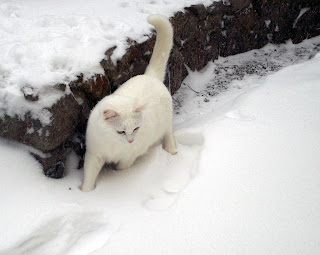 Her name is Jasmine, by the way, and I saved her from having to move out of her territory when my neighbours got a new puppy and needed to re-home their cat and her unexpected kittens. They, in turn, had found Jasmine as a skinny stray hiding under a parked car and had no idea she was pregnant until the night she gave birth under their son's bed... so she's been 'saved' at least twice in her life so far. Seven more lives to go, then.

And you're still reading this! Which proves that saving cats must be deeply buried somewhere in our psyche as a Decent Thing To Do, and brings me to my book recommendation for this month. 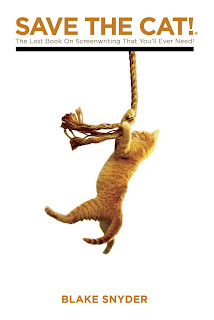 Save the Cat! is a book about screenwriting by Blake Snyder, who has written successfully for Hollywood so presumably knows what he is talking about. You won't learn the basics of how to format a script from this book, but you'll discover how stories are put together for a popcorn-popping audience, which translates equally as well to the page, particularly if you're writing genre fiction.

I have only just started my screen writing journey (I'm experimenting with a screenplay of my Pendragon Legacy series, if you're curious). But while I was reading Blake Snyder's book, I was working on the first draft of my next book for teenagers, and saw at least three areas where my story could be improved, one of which has transformed my hero from an ordinary, brave-ish young character into someone with much higher stakes to play for. When I've finished the draft, I will check how well the story works using Blake's famous 'beat sheet', hopefully without making it too formulaic and killing the soul of my book in the process.

A word of warning. I'm sure a new writer with enough determination could follow the 'Save the Cat!' formula and come up with a half-decent story - but I suspect that if you'd given me this book twenty years ago, when I was starting to think about writing for publication, I'm equally sure I'd have tripped over my debut-author feet by thinking about the process too much, and probably never finished my first book. It's like asking a cat to explain how it leaps from the roof on to a rickety fence, and from there to a fence post too small for all four paws and safely down to the ground without falling... does the cat even know? As a guide to story structure for those who already have some experience, however, it could be just what you need to refresh those creative batteries.


But that's enough about saving cats. Do check out this book if you haven't come across it already - if nothing else, printing out a few beat sheets will keep you entertained while you are watching all those replays of 'Game of Thrones' in preparation for the final series next year. Oh, and it doesn't have to be a cat that gets saved... you got that, right?

Her Pendragon Girl logline is:

"King Arthur's secret daughter battles her evil cousin Mordred for the four magical Lights that can bring her father back from the dead and save Camelot from the dark."

Find out more at www.katherineroberts.co.uk

Andrew Crofts said…
Thanks so much for this recommendation, Katherine, have ordered the book and am already 20% through it - just as good as you say. Can't think how I haven't come across it before.
21 September 2018 at 11:11

Katherine Roberts said…
Glad you're finding the book useful, Andrew! I was introduced to it in a screenwriting workshop this summer and thought it might be helpful for story structure.
21 September 2018 at 16:04

Umberto Tosi said…
Thank you, Katherine. I'm more of a dog lover, but you intrigued me enough to get a copy of "Save the Cat." It sounds like a winning addition to my shelf of writers-on-writing books, of which I cannot read too many, as they keep me sharp - I hope.
21 September 2018 at 20:46

Penny Dolan said…
Certainly a book worth reading, Katherine, but your point about coming across this method once you have begun working on your own writing first is a very important one.

(I too have a rescue cat - Cat Oliver - whose experience of at least three previous owners & homes means he will only accept strokes when he feels like it. Rather like a wayward WIP, he refuses to slip easily into the simple cat-on-a-lap format.)
22 September 2018 at 14:12

Katherine Roberts said…
Penny, your rescue Cat Oliver sounds rather like Jasmine... though she is definitely 'cat on lap' today, as it's been pouring with rain and blowing a gale outside all day.

Umberto, don't worry it's not all about cats! (and I'm sure your hero could save a dog instead).