Photographs I’ve taken which I have used in books I’ve written, by Elizabeth Kay

Since the advent of digital photography I’ve been an addict – and I’ve used a lot of the photographs I’ve taken in different books. Here are a few, with extracts from the book concerned.

The Divide
I decided to open this book in the most magical place I had ever visited, which was the humming bird garden in Monteverde, Costa Rica. 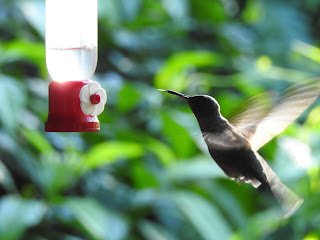 …the humming birds returned to the sugar-water feeders that were hung around the outside of the Study Centre. They used their beaks as rapiers, fencing in mid-air as they tried to knock one another away from the rim. The ones that won looked smug, and the ones that lost zoomed around the garden pretending they didn’t want a drink after all.

Back to the Divide
Although this description comes from The Divide, lot of the action in the second book is set in the library of my alternative world. I based it on a café in Bristol. 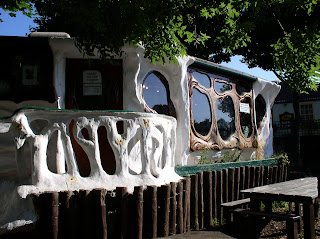 This one was made of wood, with asymmetrical window-frames and doorways. Pear-shaped windows, kidney-shaped windows, twisted beams, sloping walls, an undulating roof. It was almost as though the place had grown there, like a tree. The wood went from cream to chocolate, with every shade of coffee and caramel and butterscotch between. Each piece of timber was as smooth as a polished pebble, though whether it had become like that through craftsmanship or weathering was difficult to say. The structure was very big, although it was only one storey tall.

Jinx on the Divide
The jinx box, the shape-changing villain of the book, takes on the guise of the biggest pitcher plant in the world, which I photographed in Borneo. 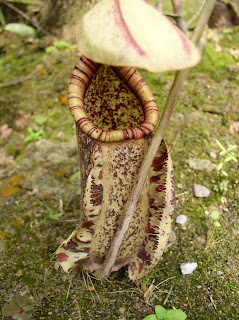 “Look at that pitcher, over there,” said Betony. “It’s absolutely enormous.”
Felix looked. It was so huge it had to rest on the ground. “What do you think it eats?” he asked.
Betony looked shocked. “Eats? What do you mean?”
“Pitcher plants are carnivorous. At least, they are in my world. Ours are much smaller than these; they catch flies, which drown and then get digested.”
Betony made a face, which quickly turned into an expression of horror as the implications hit home. “What do you think these ones eat, then?” she asked.
“I don’t know,” said Felix. “Some pitcher plants have been known to eat frogs. Perhaps this one’s big enough to tackle small birds?”
“And not necessarily that small,” said Betony, backing away. “I think you’re right about Rhino not being here. Let’s go.”
But Felix was overcome with curiosity. Although physics and chemistry were his favourite subjects at school, biology came a very close third. Insectivorous plants fascinated him, they were just so weird. Despite the lid of the pitcher plant being firmly shut, he couldn’t resist going over to peek inside.
“I wouldn’t,” said Betony, but it was too late.
As Felix lifted the oval green lid a voice said, “Well hello.” It was so sudden and so unexpected that he nearly jumped out of his skin.

Hunted
This wasn’t the biggest elephant I saw in Kenya, but it had attitude… 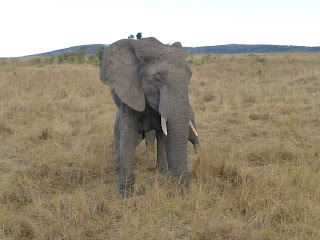 There, blocking the path, stood the biggest elephant I had ever seen. Its tusks almost swept the ground.
“Out of the way!” yelled Snyman, raising his rifle.
No-one moved.
Snyman made an angry noise, and pushed me out of the way. Because the track  was going uphill the poachers were right in his line of fire. Changa started to take off the heavy backpack. The eyes of the other two stayed fixed on the elephant as, very slowly, they put the tusks on the ground. I was quite sure that the huge grey beast in front of me knew very well how the poachers had got their ivory.

Lost in the Desert
This eleven-year-old Mongolian girl was the best rider I have ever seen, and out to prove she was at least as good as the men. 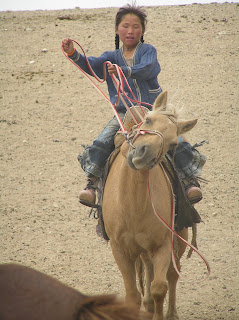 “My name is Zul,” she said. “What is your name?”
“Max. How come you speak such good English?”
“I go to school, of course,” she said. “I love school. We get people from other countries who come to teach us, and then go home again. Chinese. Russian. And for the last three years, English. Can you ride?”
I realised she had her hand looped through the reins of a grey horse. “Of course I can,” I said. I’d only had a few lessons, but I wasn’t going to tell her that.
“Get up behind me, then,” she said.
She swung herself up into the horse’s saddle. It took me three goes to climb up behind her. The reins were really long, and she whirled them round her head like a lasso to get the goats to go where she wanted. There were about twenty of them, all different colours and sizes. We set off after them, but as soon as the horse started to trot I fell off.
“I thought you said you could ride?” she said.

Beware of Men with Moustaches
This is the Castle in Prague. 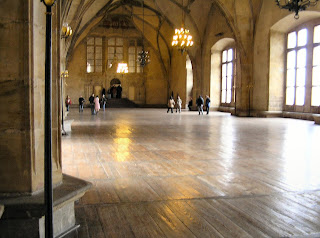 “This is very famous room,” said Svetlana. “When Mongol Hordes bring Black Death to Karetsefia, king and his family leave city and seek refuge here. Then they catch the plague anyway. Mongol Hordes take over castle, but they do everything on horseback, so they build audience hall for men on horses.”
“You mean they rode right into the castle?” said Julie.
“Yes. When Mongol Hordes leave, new king turns it into room for dancing. There is painting of him on wall at end. There are many paintings here, including very famous one of poet being shot by firing squad.”

Ice Feathers
The scenery in Iceland is truly inspirational. 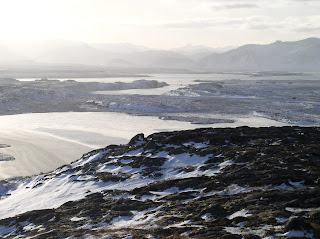 And last but not least – Grimspite, my favourite character from the Divide Trilogy. Hyenas are terrifying. I once had one padding around outside my tent, and I didn’t dare go outside to the loo until daybreak, when I heard the cooks start to prepare breakfast… 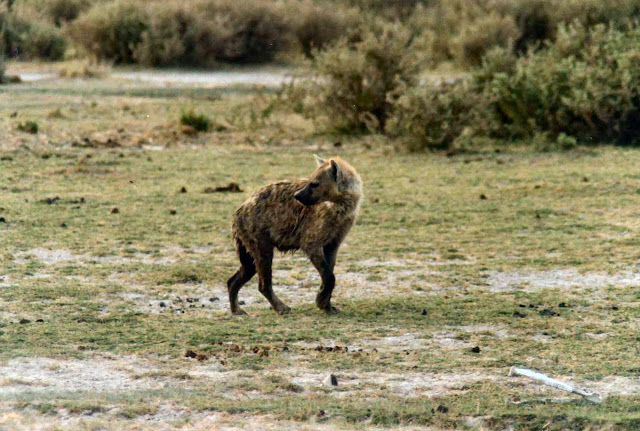 Dipika Mukherjee said…
What lovely pictures and text to accompany them. Thank you for posting this!
17 September 2018 at 17:47

Penny Dolan said…
Loved these Photos of Inspiration and your inspired extracts, Liz.