When the invitation came through Facebook Messenger as a friend request, I saw a young man, no friends in common. Populated as facebook is by shirtless wonders peddling sleazy messages, I was about to hit Decline, but decided to check the message first.


It was from the Festival Director of the Chicago South Asian Film Festival, inviting me to moderate a session after the screening of the latest film by one of the most acclaimed stars of the Bengali screen, Parambrata Chattopadhyay, on September 22, 2018.

I am glad I got to view Shonar Pahar, The Golden Mountain. I also had to think about Bengali cinema -- and Bengali poetry -- in a way I haven’t consciously processed in many years.

Bengali cinema is recognized worldwide for the towering genius of Satyajit Ray, and Shonar Pahar also pays tribute to a childlike wonder about the world. Parambrata Chattopadhyay beautifully weaves a story about the power of the imagination to create an alternative joyful universe even when the reality is rather bleak. And at a time when movies sell on sex and violence, Shonar Pahar tells a nuanced gentle story of the magical friendship between a 70-year-old woman and a 7-year-old boy.

However, the use of a Tagore poem, Birpurush, as a trope in this movie was problematic. This much venerated poem has become a classic of Bengali literature and the patriarchy inherent in the fable of a little boy, single-handedly saving his mother from dacoits in the deep dark jungle, was very much a product of the time it was written. You can read the poem and an English translation here.

Iconic or not, how likely would it be that a feisty single mother – and a librarian with a wealth of literary texts at her disposal – would so worship a poem about little boys being their mothers' saviors?  The intertextuality with 'Birpurush' made me question the director on whether the movie could have been more nuanced when it came to gender-roles in this movie, or whether that would be unrealistic. (The full interview is here).

As I thought about the treatment of this single poem in this movie, I also thought hard about the Bengali poems from my own childhood, which made me, as a young girl, feel brave or empowered.

I could not think of a single one. 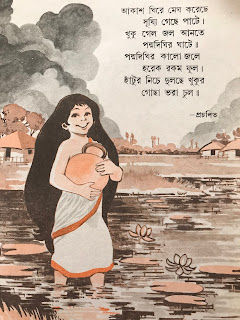 There is a poem about swinging in the air, red comb in hair, waiting for my groom to sweep me off from there. Another about a new bride, speechless with shyness. The most memorable nursery rhyme is about a young girl's wedding (Shonamonir biye). But the wedding arena is not exclusive to girls, shared as it is with a bat wedding, and little boys marching to their brides accompanied by 600 drummers, then another is accompanied by a tomcat.

Rhymes abound with little boys dancing and bears being exhorted to watch; boys fishing while elder brothers are randomly cruel to fish; boys watching the dangerous play of frogs on the heads of snakes. In these poems, little girls are absent.

The moon is a maternal uncle, but the dispenser of sleep is an aunt, called in to – you guessed it – spread sleep on infant male eyes.

It may seem silly to complain about misrepresentation from a different time (who thinks of Catholic priests and sex when reciting Goosey Goosey Gander anymore?)  but representation matters. If we are still teaching little girls from babyhood that they are invisible or less worthy of being seen, it has real repercussions. The language used to frame the girls born into our homes triumphs over any tradition of chanting mantras at our clay goddesses.

India as a whole has a problem with female foeticide. In West Bengal the sex ratio is 949 girls per thousand boys and Bengal ranks fourth in child marriages nation-wide: 54.7 %marriages involve a child bride.

Still, nobody thinks about female foeticide or child brides while sing-songing about little girls getting married under the full moon with adorably footloose elephants and horses.

As creative artists, we all tread a fine line between standing on the shoulders of the giants who came before us and genuflecting on the archaic. Asking uncomfortable questions is only the beginning.