On the toot, with drum and floot! By Jan Needle 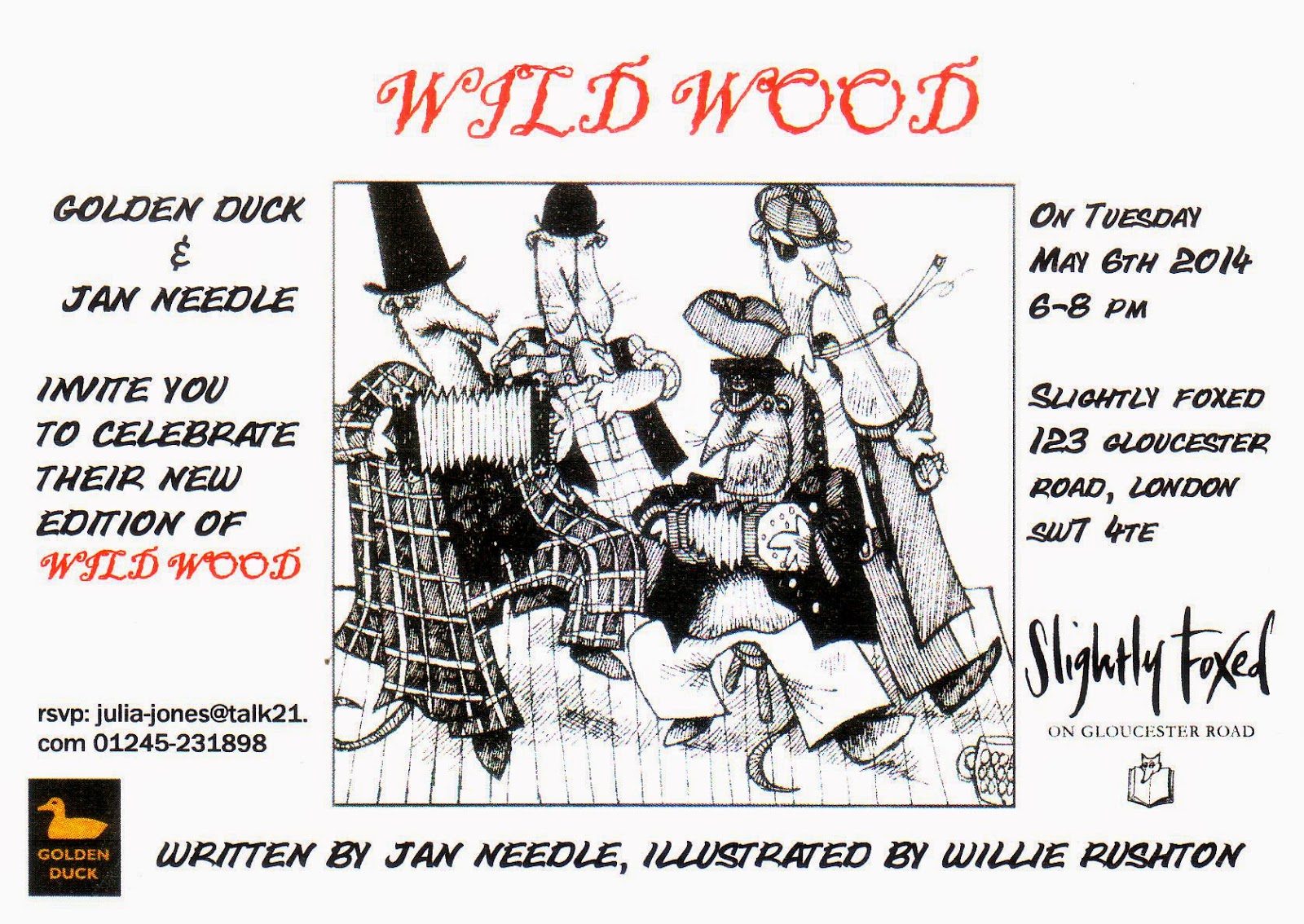 Only a few hours until my next blog is due to burst upon the unsuspecting public, and I ain't got a thought in my head.

Added to which, I'm using my new voice recognition software, so it could be a damn long time before I've actually finished it.

(Actually, that wasn't so bad. I had to correct damn, which Dragon presumably thought was something you hold water back with, and it wrote I for I've. Not bad  EH? And who cares if it put that all in caps.)

Where was I? Ah yes, a blog subject. Well on May 1, my ‘version’ of Wind in the Willows will be published as a paperback, and an e-book. Not just any old paperback either, it would bring tears to a rare book collector's eyes. Not to put too fine a point on it, it looks wonderful. And I says so as shouldn't!

It's called, for those of you who have been asleep at the back, Wild Wood, and it's Kenneth Grahame's masterpiece retold from the point of view of the Stoats, Ferrets and Weasels of that dark and mysterious deathtrap for the squirearchy.

Good old Toad is the chief villain, a capitalist fatcat who has as much idea about how the poor live as David Cameron, Mr Osborne, and all the rest of them.

(Oh dear, I'm in danger of sounding bitter. As the comedian with the twirly legs used to say, "it's all done in the best PAAAAASSIBLE taste." Some of my best friends are rich. Discuss.)

The trouble with writing through the mouth and not through the fingers I find, is that it's easy to lose one's thread. All I really need to say, is that the book is being published on May 1, with a launch party in a bookshop in London called Slightly Foxed, in Gloucester Road, on May 6. It's by invitation only, sadly, so I can't ask all of you to mob me with your £10 notes in your grubby little hands. But the Queen and the Dook have been asked, naturally, so who knows what might happen?

So, more excitingly, has Toby Rushton – son of Willie, whose wonderful illustrations, IMHO, make the book. And Toby is coming! I last saw him dressed as a would-be tennis star, in the comfort of his own front room.

I'm also having a launch in the Conservative club in Uppermill the following Wednesday, which will be a “free and easy” in the grand Lancashire tradition. With buckshee beer brewed and donated by my local microbrewery, and called Daisy's Special. Daisy is Ma Ferret, who brews beer in the Wild Wood to keep the animals from revolting. So to speak.

Yes, I did say the Conservative club. Any port in a storm for us socialists these days, eh? Sorry Dad.

And on the Sunday in between those dates, there will be yet another launch party in the Albert sports and social club in West Didsbury, Manchester. Greenfield Brewery will be providing beer for that occasion too. Spreading the joy about.

To add to the fun, the delightful and talented Eliza P will be performing a song she wrote especially for me, to celebrate the book. She tried it out at the folk club on Sunday and it went down a storm. It's lovely, and we're hoping to put it on YouTube. Keep you posted. (She wrote the tune as well. Words and music in about two days. I bloody hate her.)

In all my years as an author, I think this (or these) will be my first ever proper launches.  And I'm terrified.

But the publisher is Golden Duck, whose guiding lights are no less a pair of superstars than Julia Jones and Francis Wheen, and the book has been designed and put together, also electronified, by my son Matti Gardner and his partner Kate Fox.

Far as I can see, I'm the only weak link. Please keep your fingers crossed. 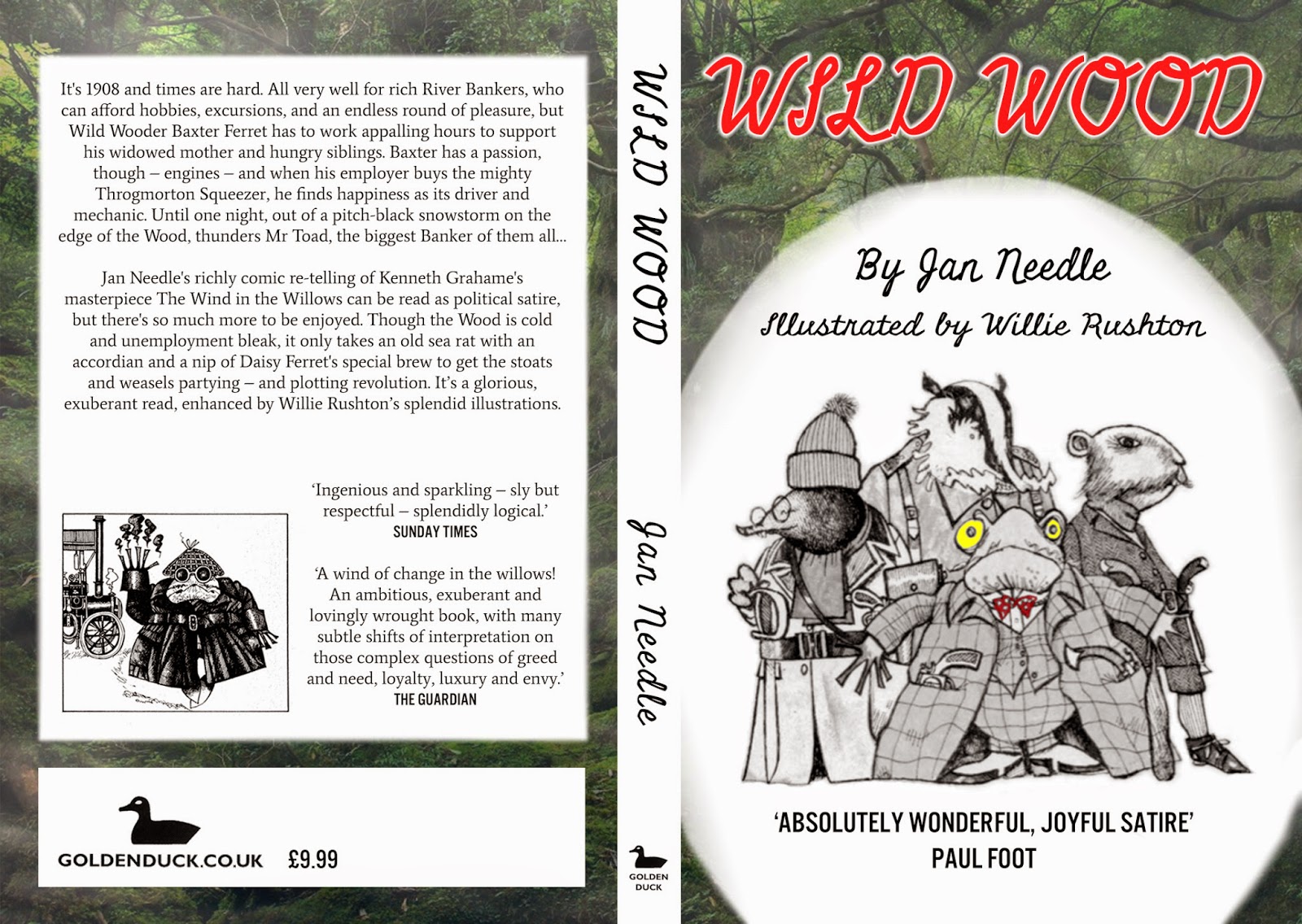 Can't wait for the book! And THAT sounds like the way to launch a book. Was complaining a bit (well only a bit because I should be thankful for small mercies) that a book launch wasn't half as nice as the opening night of a play but yours sounds like a lot of fun - as does the book. Hope you have mega sales!

Nice chatty blog. Was that the influence of your software. I've just bought Dragon as well and I must say I'm impressed. I'd been expecting it to make a lot of mistakes like some OCR programmes, but it's really quite accurate.

I'll forgive you the Conservative Club, but just this once. The whole enterprise sounds great, Jan, and they sound like real, old-fashioned launches.
By the way, congratulations on dictating a whole blog. I think Dragon's great for transcribing notes and research but I can never 'create' with it. Maybe it's because speech is so much 'of the minute' whereas when writing words we always have a wider context in mind.
Enjoy all those launches and I hope the book's a great success.

Bill, I haven't tried writing a book by mouth yet, but not so very very long ago I thought I had to write by hand and then transcribe on to a keyboard. I jumped that hurdle, much to my surprise, so I'm going to have a bash on a spouted novel next. Or perhaps a novella. Or a a short story. Or a sentence. Ooh, I've just realised I'm typing this instead of talking it! Habit breaking will be the first hurdle...

PS finding a tory in the uppermill con club is like finding a Needle in a teetotal tavern. thank god

I did blink and do a double take at 'Conservative Club', Jan. Sorry, can't cross that threshhold, not even for Ma Ferret and Eliza P - but wish both you and Julia enormous luck with the book.

They used to have a picture of Thatcher M in the main room, but they took it down because the members complained!

Jan, we're really looking forward to the launch. I know I have an original WW hardback somewhere but I can't find it. Launching in a conservative club is a delightful irony. Have any Oldham Tories actually read it? No, I thought not.
Anyway, a little bit of history will be made in the Slightly Foxed.

Have a wonderful launch, Jan!

Thanks all - there remains very little to beat the thrill of opening the printer's boxes and seeing finished copies. NEVERTHELESS we are not dissing e-books here. Matti Gardner is on the case and links will soon go live

hurray, congratulations Jan and Julia and all concerned in this great launch, this one has legs! lots of them, by the look of things.
Just wondering why some of my AE colleagues are going for Dragon voice activated stuff, is there a reason in general or is it to save RSI in the wrists?

I have played folk gigs at the Con club and must admit to an uneasy feeling initially! Not too many Conservatives to be found at those gigs though. But just in case, I'd say that as some of my songs may instigate a few seismic rumblings to the Tory bricks 'n' mortar, that is exactly where they should be played!I like the idea of the "Wild Wood" launch being there,being one of society's ferrets, In true stoat-style, I say lets take over Toad Hall! :-) x

Eliza P (Ps.Re the captcha: I've not even had breakfast yet & someone is asking me to prove that I am not a robot!)

It's a great read! Am still chortling over the Boddington joke. And yes, I will review it today!
Good luck with the launches!