Christmas Under A Tropical Sun: Dipika Mukherjee examines Christmas in literature from a warm and sunny place


As I write this post from Malaysia, under a tropical sun, I am struck by how universal the festivities of Christmas are, even in our modern fractured world. In this majority-Muslim country, Christmas is celebrated with Open Houses as Christian families open their doors for non-Christian friends and family.  There is no snow, there is food, there is feasting...and the emphasis is on the ties of friendship and family.
A green Christmas in the tropics is a warm Christmas indeed. 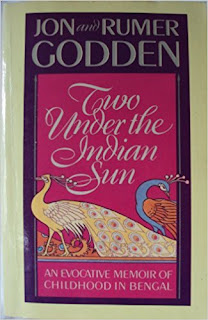 Two years ago, I read a story by the Godden sisters, recounting five years of their childhood spent in the Indian village of Narayanganj, during World War I.
I was enchanted. Jon and Rumer Godden wrote Two Under the Indian Sun story as adults, but it is infused with the childhood wonder and daily astonishment of life in British India. This book was published in the US in 1966 by Knopf/Viking and is a delightful retelling of a childhood in India by two accomplished writers.
And nowhere is the magic more apparent than in their retelling of the Christmas in Narayanganj.
The Christmas scene begins with the sisters hunting for presents which are hidden in the garden --"parcels would be up trees, in the middle of bushes, behind bamboos, under flower pots, tied to the swing"-- wrapped in plain brown paper with a string. The presents are simple and home-made, and the joy is in the "game" of Christmas, rather than strict religious injunctions.
Then comes the giving of dollies, where the "dolli" is not a doll but from the Indian word dali, meaning an offering or a gift. Christmas is presented as an "orgy of wonder" for the two British girls as the Indians came "to call personally and make his salaams", and the rank and honour of the persons being saluted was coded in the mannerisms and the clothes (silk achkans vs sock suspenders). The scene is  described in gorgeous detail as a visitors flock in bearing gifts. The two girls have to then re-gift everything to the neighbourhood children, no matter how tempted they are to hoard their gifts; when the girls resist, this turns into a learning moment: "As well as a time for getting, Christmas is a time for giving," said Mam, and "You must not only learn to give, you must love giving".
This Christmas scene is especially interesting as it is filtered through the lens of American egalitarianism, some two decades after Indian independence. Much of the giving and receiving was coded in the power dynamics of colonialism, and the two writers acknowledge the inequity of the times. 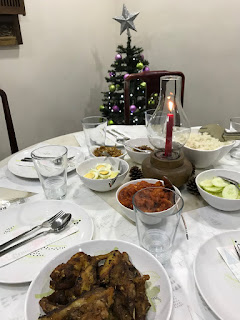 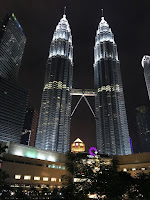 Now, in post-colonial Malaysia, my Christmas is about spicy prawn sambal and rice and Christmas cake, against a backdrop of a festive Christmas tree. There is still food and feasting and family, and anyone who is a friend is invited to a communal table.
Not a White Christmas in any sense, but a very Green Christmas indeed...Happy holidays from the tropics!

Umberto Tosi said…
Wonderful! Looking forward to reading Two Under the Indian Sun now. I'll be dreaming of a green Christmas. Thank you and a happy new year to you, Dipika!
27 December 2017 at 02:31