Interview With The Elf Himself - Umberto Tosi 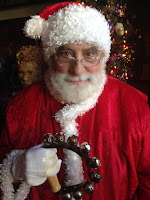 Last week after much back-and-forth, I finally got the okay from Polar HQ to interview The Elf Himself. I wasn't going to complain about being offered this primo "get" at the last minute, what with December here and lights already strung everywhere. I would like to think that I got the twinkle-and-nod because the Jolly Red One wanted to meet the author of Milagro on 34th Street. I even fantasized that might give me an award for my past service as a "real bearded," department-store Santa. No dice, however. The reality, I suspect, was that Polar PR had called on me as a substitute after a celebrity television interviewer dropped out due to sexual misconduct charges. Can't have Santa's name mixed up in all that.

"Unseasonably warm," Kringle muttered, fiddling with a thermostat as I was escorted into his cluttered workshop office by a bony, baleful, elf from IT, who obviously didn't like the task. Santa extended a chubby white-gloved hand. "Sorry about the mess. Just clear away some of those toy parts and sit yourself down, boy!" He motioned toward a faded jade-green velvet upholstered Victorian sofa opposite a huge oak desk piled with stacks of paper -- presumably old lists, now handled electronically. I could barely see him when took a seat behind them.

It's been a lifetime since I was a boy, but I didn't correct him. He's way older than I, and knows everything, after all, especially if we've been bad or good -- and that makes for a long list I didn't want to get into with him or anyone.

"Just 'Santa' will do," he responded. "I've let most of the office staff go," he said. "We're clearing out for the new owner." He put a gloved finger to the side of his nose and his whole body floated upwards a bit so I could see him better.

I sensed a scoop. "New owner?"

"Jeff Besos. You know him?"

"I know of him." I scribbled furiously on my yellow-lined pad. (I still can't get the hang of digital notetaking and I'm awful at transcribing recordings.)

"I don't know about that," I said. "I can't even get my 2-D printer to spit out a Fandango ticket properly."

"Does this mean you're going to retire?"

"Yes, except for very special appearances," he said.

"Some people would accuse you of selling out, Santa. What do you say to that?" It was time for the tough questions - beloved icon or not.

"When I started this business," Santa leaned back in his hovering chair, which I suddenly noticed was made of candy canes. "It was to do good, spread good cheer and compassion, encourage generosity, encourage civility, raise awareness about children. We were small -- delivering only here and there, trinkets, cookies, sweets... But it's grown worldwide, into a giant economic engine, a consumer madness, a cash cow for corporations often cashing in on child labor. It's gotten out of hand."

"No, I'm cashing out and putting the power of my meme to something I more useful I hope -- working all year to change things for the better, maybe. This holiday season thing isn't working out."

"Are you going to run for office?"

"I'm not ruling it out, but first off I'm starting a movement to get people to put as much energy into helping each other as they do into shopping. In the process, I'm hoping to scare politicians into weaseling for better causes than oil, war, and banking."

"Good luck with that, sir." I didn't want to sound disrespectful, but it had to be said. "Have you considered that you could be living in a polar bubble?"

"Yes. This is a space-time bubble. I know that. We rent it out for parties and getaways sometimes -- to Superman as his Fortress of Solitude, for example."

I scribbled this down furiously. Over the years I've found that I learn something with every interview. It's a sigh. I moved on. "What about the kids, waiting for Christmas morning. If you quit, who will supply the magic?"

"I'm trusting humanity to keep that going -- actually, growing into a larger sense of generosity towards others. As for gifts under trees, Amazon can do a better distribution job than I can with my elves and reindeer, frankly."

"What about your lists?" I pointed to the stacks on his desk. "Keeping track, lumps of coal and so forth?"

"The Doomsday Clock supersedes all that, don't you think?" He curled his white handlebars and brushed his beard. "If you don't change course, you're all going down, and taking your children with you. I'll have to relocate to another planet."

I broke into a sweat despite the lowered thermostat. I tried to lighten things up. "What about the reindeer?" I leaned forward to glimpse Rudolph poking his nose against one of the workshop's dusty oval windows.

"I'm putting them to pasture in Alberta, except for big events, rallies and so forth," he said, "near Lake Louise. Off the record, I have a lodge there."

"What about the United States? Any visits."

"I'm staying away as long as you folks let that Idiot Orange Orge run things. I'm an alien without papers, obviously not welcome. 'War on Christmas?' Hell, he and those who throw that accusation around make war on everything I'm about, starting with children. Talk about projection and fantasy!"

"That's kind of what my 'Milagro' novella's about," I said. "It's a take-off on the old movie, you know, Miracle on 34th Street, except instead of little Natalie Wood, Santa has to help a pair of U.S.-born children being orphaned by ICE agents deporting their mother."

"Yes. I read it," he said. Speed-reading, no doubt. I had almost forgotten Santa knows all. "When is the movie coming out?" Santa's renowned clairvoyance apparently doesn't include prophecy.

"That depends," I shrugged. "Nothing solid right now," I said, trying to sound nonchalant. "Would you consider a role -- maybe a cameo?" My face went red as his. I'm sure he noticed. I hadn't meant to hustle Santa Claus, just make conversation! But I wouldn't have turned down a book endorsement either.

"Don't sweat it. A little hustle isn't bad. Nothing wrong with shining your light."

"Er... what going to happen to your workshop, all this up here?" I changed the subject.

"Amazon is redoing the North Pole into a theme park."

"Wow. Quite ambitious. While Besos is at it, I wish Amazon would develop more accessible, comprehensive editing, production, and promotional tools for indie writers and publishers like me," I blurted. "We make good use of what's there, but it's not near the potential," I said.

Santa pulled an iPhone from his red jacket and entered a notation with surprising speed. "Anything else you want for Christmas, my boy?" He grinned.

"You can make that happen, Santa?"

"Only if you're not on the naughty list," Santa said, then added:

"Too late for that," I muttered.

"Just kidding," said Father Christmas, Der Alter Pelznickel, Papa Noël,  "I don't do processes, only gifts, good cheer or lumps of coal. All that other stuff is up to you people."

"No matter," I said. "Giving me this big story is Christmas present enough! Thank you, Santa."

"You're good with that?"

"Of course! We're pan-solstice celebrants. You should know that. It's all the same, peace on earth, love and good will, - a Merry Christmas to all and to all a good night!"

Umberto Tosi is the author of My Dog's Name, Ophelia Rising, Milagro on 34th Street and Our Own Kind. His short stories have been published in Catamaran Literary Reader and Chicago Quarterly Review where he is a contributing editor. He was contributing writer to Forbes ASAP, covering the Silicon Valley tech industry. Prior to that, he was an editor and staff writer for the Los Angeles Times and its Sunday magazine. He was also the editor of San Francisco Magazine and other regionals He has written more than 300 articles for newspapers and magazines, online and in print. He joined Authors Electric in May 2015 and has contributed to several of its anthologies, including Another Flash in the Pen and One More Flash in the Pen.He has four grown children - Alicia Sammons, Kara Towe, Cristina Sheppard and Zoë Tosi - and resides in Chicago with artist Eleanor Spiess-Ferris.
.

Great post Umberto! One that touches on sexual misconduct charges and buyouts and issues of our sad times ...I'm an alien without papers, obviously not welcome"...when will we have some respite and real cheer?

Thanks, Umberto. I did enjoy these lovely insights into Mr Claus (and you).

And a ho ho jolly old ho from the depths of lancashire (england)!

What a wonderful Christmas tale - filled with all the insight, humour, courage and compassion I've come to expect from this writer. Thank you, Umberto.

Lovely light, whimsical touch. I actually read to the end, which, I confess, I don't always do with blogs generally. Something to do with reading a screen rather than paper. You've made me feel Christmassy as well! Lots of clever, underlying allusions too.

That was really lovely, Umberto. And, underneath the humour, chilling.

Many thanks to Dipika, Chris, Bill, Jan, Rosalie, Fran and Dennis for your generous comments, and happy holidays (and beyond) to all of you and yours!