I admit that life has totally thrown me off-course this month. In the midst of struggling with something personal (that has not yet been fused into my art), I am floundering. Forgive me, then, for republishing something I once posted on my blog a few years ago. I generally craft new material for this blog, thoughts emerging from my current writing life, but I just can't pull it off today. 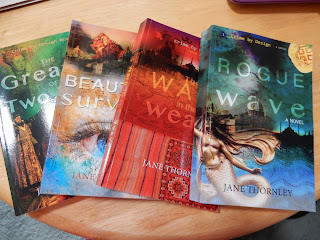 
Readers crave fictional characters who grow and change as they drive the story forward. A character in the process of internal transformation offers another plot to unfold within the story world, possibly the most important engine of all. Without character transformation, stories feel empty and one-dimensional. No matter what

Scarlet in Gone with the Wind comes to mind. Brewed in a deep well of privilege, she begins selfish, entitled, and manipulative, as fascinating as she is unlikable.  When blow after blow strikes her down, we cheer as she hoists herself back up and keeps on trudging through the mud of civil war. That's character. We want them strong, yet vulnerable. We want them to bleed, but still wade back into battle undaunted and, most importantly, we want them to learn from their trials.

We identify with the patterns of humanity we recognize. We need to see a living, beating heart in every book we read, even if it's science fiction or fantasy. That's where we identify the heroes that help us recognize a germ of the heroic in everyone.

As a writer, I set my characters on a path without knowing exactly how the voyage will transform them. So much of writing is a process of discovery for the author as well as the reader. We never take our fictional journeys alone. Being a "panster", I no more outline character arcs than I do plots which makes the end point a surprise for me as much as the reader.

Though series are supposedly more open to set characters doing what they do across multiple volumes, I've been developing a long character arc without even knowing it. For Phoebe McCabe in the Crime by Design series, a young woman begins in Rogue Wave believing that maturity can be measured in digits alone until life and mayhem force her to dig deep inside herself to discover her true substance. By Warp in the Weave, she is maturing, her edges hardening, and by book three in the series, she becomes a more heroic manifestation of her earlier self. By the time book five rolls around (due to be published in 2018), her inner revolution jettisons the series in a whole new direction.

In the end, it doesn't matter whether our stories are set in reality or in some semblance thereof, the core of fiction always pivots around what we recognize as human, even if it beats inside an alien heart.

Umberto Tosi said…
Thanks for another creatively helpful post. I find the process to be much the same. Happy holidays!
16 December 2017 at 18:50