By Ann Evans - December 13, 2017
As most people will know, Coventry, which is my home city, is to be the UK City of Culture 2021. Naturally, everyone is delighted and hoping that the new status is going to bring more prosperity into the city, as it has done for Hull, the current UK City of Culture.

There was competition for the title from Paisley, Stoke-on-Trent, Sunderland and Swansea. And actually, if Sunderland had won it, that would have been my second choice as my parents and past ancestors all hail from there.

The title is awarded every four years and Coventry will be the third UK City of Culture. Londonderry being the first in 2013, followed by Hull.

Sir Frank Whittle, the inventor of the jet engine was born in Coventry. There’s a centre in honour of his work at the Midlands Air Museum, Baginton, which is just on the city boundaries. And there’s a statue of him alongside the futuristic-looking Whittle Arch in Millennium Place in the city centre.

Earlier in the city’s history, Coventry pioneered many industries – bicycles, clocks and watches, ribbons. In early Medieval times it was a thriving market town. Today, the city’s museums, buildings and monuments remind people of its industrious past. And today, businesses are flourishing, as are its Universities.

The city’s most famous monuments of course, are our two cathedrals: the ruins of the old Cathedral of St Michael's, so badly destroyed in the Coventry Blitz of 1940; and the awesome New Cathedral, designed by Sir Basil Spence and consecrated in 1962.
Not forgetting also, the City’s most famous woman, Lady Godiva. For the last 30 years or so, Pru Poretta has been an ambassador for Coventry as our modern day Lady Godiva.

On the literature scene, Coventry, writer and poet Philip Larkin (1922-1985) was born in the city and later became a university librarian in Hull. The Philip Larkin Society which was founded ten years after his death, point out that it’s fitting that Coventry should be taking on the mantle from Hull, which is the place where Larkin spent most of his adult life, and which shares many historical and cultural similarities.

Another famous writer born here in Coventry is Lee Child. Best known for his Jack Reacher novels, Lee, who was born in 1954, spent his early years in Coventry before moving to Birmingham. I was so fortunate to meet him at the Harrogate Crime Writers festival this summer, where he chatted to me about the things he remembered about Coventry.

Another famous early writer was Angela Brazil (1868 – 1947), who was born in Preston, Lancashire but moved to Coventry in 1911. She was one of the first British writers of modern schoolgirl stories, publishing nearly 50 books of girls’ fiction, many set in boarding schools. Her stories remained popular until the 1960s; and her collection is now in Coventry Library. 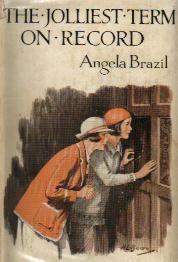 From my own point of view, Coventry has inspired my writing, with the illustrated Children’s History of Coventry, which many of the city’s schools have in their libraries. And my YA novel, Celeste, a time slip thriller set in Coventry, with the cathedrals as the backdrop.

How about you, how inspirational is your city to you and your writing?

My trailer for Celeste features the old and new cathedrals, and you can view it here: https://www.youtube.com/watch?v=AFDBEt9o3Fw 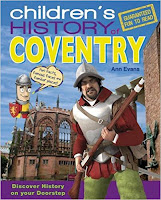 janedwards said…
Well done Coventry! (Living in Stoke I had hoped for our bid - but hey ho :-) )

Ann Evans said…
Oh, thank you Enid! I hope you enjoy it!
And Jane, maybe Stoke will win it another time in the future.
Have a lovely Christmas everyone!
16 December 2017 at 15:58