By Cecilia Peartree - December 05, 2017
Women are sometimes thought to be better than men at multi-tasking, although I am not entirely convinced. Even if they are, it probably isn't an in-built skill, if it is even a skill, but a tendency which develops over the course of an average woman's life as they juggle a career, childcare, housework and anything else they might attempt outside these traditional spheres. Obviously in those enlightened times men do this too, but in my (fairly limited) experience it doesn't seem to come as easily to them. However as I get older I too am less able or willing to do more than one thing at a time, or even one after the other in some cases.

I was first introduced to the concept of multi-tasking in a book entitled (as far as I can recall) the I Hate to Housekeep Book, which was a sequel to the I Hate to Cook Book. I bought these to assist with my first attempts at cooking and housekeeping, probably while I was at university and living away from home for the first time, but the feelings expressed in their titles have been a kind of leitmotif for me ever since.
One of the chapters in the I Hate to Housekeep book was entitled 'How to do lots of things at once', or words to that effect. The writer's advice was that if you had lots of things to do, all apparently of equal urgency, you should make a start on all  of them before finishing any of them, on the grounds that once you had started you would feel bound to complete each of the tasks.
Because the example given in the book involved writing letters, I was reminded of it during this season when the task of sending Christmas cards looms up in the background like the shadow of a monster in a fantasy movie. It wouldn't loom quite so large if I didn't persist in writing letters to many of the recipients. At one time I used to use mail-merge to accomplish this but because my printer has been temporarily out of order for a couple of years, I've been having to hand-write things, and because of that the task often seems endless and therefore so impossible to accomplish before the last posting-date that I might as well not bother at all.

The point about making a start on lots of different things is oddly similar to the advice given by the tutor on a time management course I attended a bit more recently, which was to write down your list of tasks and do each of them for five minutes before moving on to the next one, and then to go back to the start and do each of them for ten minutes the next time, and so on.
I did try out the time management thing at work for a while, but it was so unwieldy and I kept being interrupted by more urgent stuff to do so often, that it seemed like more trouble than it was worth. Instead, during my working day, I usually start with the easiest and quickest things and move on to the more complicated things just at the end of the lunch-break, when hardly anyone ever calls or sends emails. I find this psychologically more satisfying as it means you get quite a few simple things finished and can tick them off your list, if you have a list, instead of potentially having them hanging over you all day. 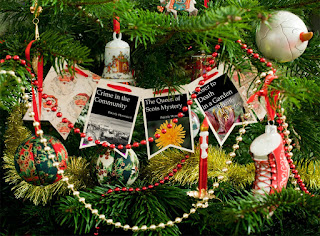 When I first began to write seriously, which was another thing resulting from NaNoWriMo, I used to interleave writing with many other activities, such as running a youth drama group, working full-time, chairing a committee, helping with props for another drama group, and organising the family, to the extent that they were receptive to being organised. But during this year's NaNoWriMo I found I could do very little else apart from working on my novel. I was 'too busy' to go to any committee meetings, I couldn't read any other novels, and I certainly couldn't organise anything. I even took a week off work to write and actually wrote during it, which hasn't always been the case in the past. I think this is a sign either that my ability to multi-task has waned or that my ability to focus on doing one thing properly has increased. Either of these would probably represent some sort of progress.
Authors Electric Blog Cecilia Peartree NaNoWRiMo

Nick said…
Surely doing one thing well is more constructive than faffing round doing six things without due care and attention, and thus badly.
5 December 2017 at 16:08

Cecilia Peartree said…
Yes, I think you're probably right. Sometimes there is no alternative to trying to do everything at once, although now that my kids are grown-up that doesn't seem to happen quite as often as before!
6 December 2017 at 17:01