By glitter noir - December 12, 2017
Some cities are expensive to start with: New York, San Francisco, L.A...Others have high-rentness thrust upon them: in Atlanta, for example, after the 1996 Olympics rents simply went through the roof overnight. I've lived in both classes of city and found myself priced out again and again. And I've moseyed along with my head down. 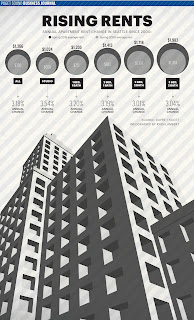 Now, at a certain age, I  face more wrecking balls that build while they destroy dreams like Shiva. 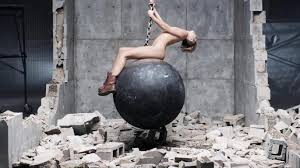 Three years ago, when I moved from Charlotte to Seattle, this was a happening city.. And it still is, in a different way.. With a booming economy driven by Amazon, Microsoft and Google, Seattle has risen to fifth rank in the nation's least affordable cities.

An estimated 68 buildings are under construction or waiting to begin in midtown. Seattle has three times as many cranes as New York City, though a mere fraction of its size. And most of these buildings are either for apartments or offices for the Big Three. One bedroom apartments, in Seattle proper, rent for an average of $1953  month. And the cost of living comfortably here is $72, 092 a year.

Welcome to Dream City. I'm nowhere near that ballpark figure. And my dream of moving from a studio to a one bedroom apartment in a better part of town are, shall we say, challenged. As a writer, though, this city works for me. It keeps me young and productive. So, faced with the wrecking ball of rising rent, here is where I take my stand and refuse to be moved on.

And how do I, with a job I like but which is far from that ballpark. rise into the comfort zone and protect my place?

I start with the one thing I do have--my talent--and start to work like a man possessed. In the past two days off work, I've logged more than twenty hours on the fifth draft of my work in progress. Tomorrow I'll log in another ten or twelve. On work days I'll log in a minimum of four hours. And I'll keep at this pace relentlessly, producing more and more books.

No. Not this time. This is war, time to beat the wrecking balls by erecting superior houses of art.

Umberto Tosi said…
Hang in there, Reb! Seattle's a great town. I know the fight. I lived 25 of my best years in my dream town, San Francisco, somehow on a modest writer-editor's income, always by slight of hand, managing to enjoy a view of the bay and/or ocean. Before that, L.A. I could nowhere near afford even a hovel in either city now, but find Chicago still another great city with culture, grandeur, and history to enjoy, still affordable (best-kept secret). Speculators and NIBYs are taking down our storied cities one by one, like cockroaches, it's not what they eat, it's what they spoil by making it unaffordable to the people with whom I care to live.
12 December 2017 at 07:35

Bill Kirton said…
Hard to know what to say, Reb. As you know, we're not in the most secure or remunerative of professions. Your belief in yourself, though, could make the difference. I really hope it does.
12 December 2017 at 14:47

Thanks, Umberto and Bill. I believe that faith and perseverance will prevail. The only other towns I'd care to fly to--say, San Diego--are just as overpriced. Will keep you posted.
12 December 2017 at 15:21