From Zero to Three Novels in 2017 - by Debbie Young, Author of the Sophie Sayers Village Mysteries

By Debbie Young - December 30, 2017
Writing on the penultimate day of 2017, I can't NOT think about where this year has taken me and what next year will bring.

Don't worry - I'm not going to be banging on about New Years' Resolutions. I love new beginnings and seize every opportunity for one - new school terms (I have a school-age daughter), solstices, equinoxes, birthdays, etc. But I was cured of an addiction to Resolutions a couple of years ago by my friend and mentor, the author and creativism teacher Orna Ross (you may also know her as the founder and director of the Alliance of Independent Authors).

Orna Ross made me realise that New Years' Resolutions generally focus on the negative: things to give up or bad habits to reform. Her recommendation is to state Creative Intentions instead - a more positive, constructive system which focuses on the process rather than the outcome.


This is the approach I took for 2017, and, hey presto, it turned me into a novelist. Instead of saying as midnight chimed on 31st December 2016 "This is the year I'll write my first novel" (for the umpteenth time), I formulated a specific plan to write and self-publish the first three Sophie Sayers Village Mysteries seven-book series, for which I'd fixed the names and broad character outlines of the key characters, the titles of each book, the timeframe of the series (the course of a village year from one summer to the next), and the timeframe for publication, starting with three books in 2017, to match the timing of each book's setting.

The key difference? I had an actionable - ambitious but still actionable - plan that made a lifelong dream seem tangible, believable and real.


I also stated my intention publicly, a kind of reverse of "naming and shaming", or, to put it a more positive way, like a creative marriage vow, that made me feel more committed, as if it was an inevitable result.

Thus Best Murder in Show, taking place in the summer at the time of the vllage horticultural show, was to launch on April 1st (Orna's birthday, by no coincidence). Trick or Murder?, set at Halloween and Guy Fawkes' Night, was out at the end of August, and Murder in the Manger, revolving around a nativity play that goes wrong, was published on 6th November - picking up the day after the last book left off.

So, from 0-3 novels in a year - and I'm three-quarters of the way through writing the next one (Murder by the Book, due out in April), and am planning two further books in the series for 2018, with the final one - plus three bonus spin-offs (an eighth novel, a novella, and a short-story collection)  planned for 2019.


I confess it left me exhausted - physically, mentally and emotionally - and I've realised that as a novelist, I'm an all-or-nothing girl. When I'm in novel-writing mode, I'm totally immersed, waking and sleeping. Literally: if my last thought at night is how to solve a plot problem or a character issue, and my first thought on waking is its solution.

So aware have I become this year of the power of my unconscious, and at times feeling as if I'm simply taking dictation rather than consciously writing, if this was medieval times, I'd worry that I'd be burnt as a witch.


But it's been a deeply exciting and rewarding year, and it has made me very happy.

If you'd like to find out more about my novels and other aspects of my writing life, visit my website: www.authordebbieyoung.com. All three novels are available as Kindle ebooks (coming to other ebook platforms soon) and to order from all good bookshops by quoting the ISBN (and from Amazon if you prefer to shop online - here's the link to the Amazon page for the three-book series so far).


One other creative intention for the new year is the Fourth Hawkesbury Upton Literature Festival on Saturday 21st April 2018, for which I'm just finalising the programme. 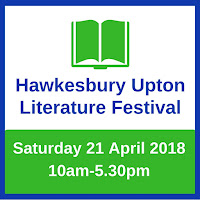 I launched this Festival series in my village in 2015 as a one-evening event, offering free events for all, to be accessible even to those who couldn't afford conventional litfest tickets and the associated costs of events such as the Cheltenham, Bath and Hay-on-Wye festivals. (As I live in the Cotswolds, I'm not far from any of those.)

It has now grown into a day-long, action-packed programme featuring about 50 authors in talks, workshops and readings - all still free to attend. Check out its website to catch news updates from 1st January: www.hulitfest.com.


What are your creative intentions for 2018? I'd love to know! 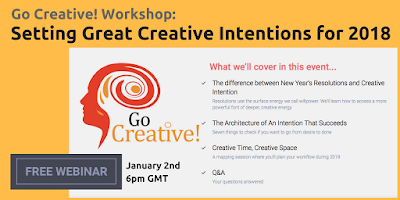 Chris Longmuir said…
You're an inspiration, Debbie. I admire you. I'm a one book a year author (sometimes longer) so to write three books in the space of a year is admirable. More power to your pen.
30 December 2017 at 10:47