By Bill Kirton - December 07, 2017
To counterbalance my seasonal ‘Bah humbug’ stance, I’ve resurrected and updated a piece I wrote nearly 50 years ago. (I even got paid for it when it was used in an educational anthology of some sort.) 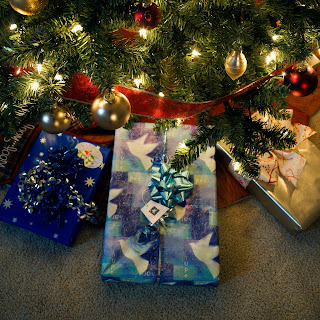 I am writing to you to make certain points about my conditions of employment which I feel are due for renegotiation.

1. Transport
Most representatives of my acquaintance drive a company car. I appreciate that an open sleigh has the charm of tradition but, in the northern hemisphere, it is hardly the ideal form of locomotion for late December. Also, while having it propelled by reindeer rather than fossil fuels significantly enhances our environmental credentials, the PR department's campaign to promote the image of my lead reindeer has resulted in unrest amongst the others. He now considers himself to be a superstar, holds an Equity card, and flaunts his celebrity status to such an extent that the others have developed militant tendencies which have led to some perilous arbitration disputes in the sky over Barnsley, Southampton and other densely populated areas.

2 Uniform
If you agree on the inappropriateness of the means of transport, it will follow that the big red coat and Wellington boots are also superfluous. Given the lack of chimneys and the ubiquity of small bore central heating systems, it has become increasingly difficult to gain access to some premises in order to place display material. A sleeker, foam-lined, skin diver’s outfit in Lycra would be much more appropriate. And I would like permission to shave. Again, I acknowledge the traditional value of the long white beard; but it effectively prohibits any active social life and is probably the main reason why I am still a bachelor.

3 Area
My conversations with other representatives have confirmed what I have always suspected, i.e. that my area is much too large. No other employer expects one representative to cover the whole world in a single night. I suggest, therefore, that we discontinue the practice of leaving courtesy cards at the homes of those who do not share the Christian faith, and that you employ a second representative for the southern hemisphere. Also, given that the Factories Act requires employees to record a statutory 90 days before they are entitled to a holiday, I would bring to your attention the fact that at this rate, working one night a year, I shall be 114 before I qualify.

4 Changing markets
I do not have exact figures but it is common knowledge that the world population is increasing exponentially at an alarming rate. And the new citizens are all children. Also, current socio-political conditions and the utterances and actions of leaders on both sides of the Atlantic have devalued notions of benevolence, bonhomie and charity, and fostered increased cynicism, amongst parents and children alike, to such an extent that belief in Father Christmas has been significantly eroded. I am secure enough in myself not to allow this to pose any existential problem, however, many children, thanks to their familiarity with games such as Grand Theft Auto, now seek to obtain evidence of my existence, or otherwise, by setting big steel traps in the fireplace. I think my salary should reflect this added hazard.

5 Factory
I have never understood why our manufacturing division’s premises were built at the strategically inconvenient North Pole, nor why recruitment policies favour elves. In terms of basic economics, if in any one year the vagaries of fashion promote a particularly large or heavy must-have toy, productivity invariably slows to critical levels.

To sum up: I would propose that the factory be resited in Monte Carlo, that height restrictions on employees be discarded, that Christmas be staggered, and that Rudolph be sold to the makers of Pedigree Chum.

Chris Longmuir said…
I'm organising your strike committee and buses are standing by to transport the professional picketers.
7 December 2017 at 09:42

Jan Needle said…
"it effectively prohibits any active social life and is probably the main reason why I am still a bachelor."


I think Claus S. is a blatant chancer. Firstly, I have a beard and I've definitely never been short of wives (even short wives), and secondly the obvious reason is that he's a grumpy old git, not to say a barrack room lawyer. Furthermore, no self-respecting woman would ever even contemplate marrying some fat lump in a skin-diving outfit, especially upside down halfway up a chimney. Do us all a favour and just SACK HIM!

glitter noir said…
Who'd have guessed that the author of Carston and other dark delights could be such a consummate chuckler? Great fun, Bill.

Umberto Tosi said…
This is hilarious, Bill! ... as powerful a blow for improving elfin working conditions as ever it was fifty years ago!

Your post reminds me of a madcap New Yorker satire by legendary humorist, playwright, and Marx Brothers screenwriter S.J. Perlman entitled "Waiting for Santy".
8 December 2017 at 07:20

Bill Kirton said…
Good for you, Chris – a much better response than that of reactionary old Needle siding, as ever, with oppressive corporate entities preferring profits over compassion.

Fran, you may be right, although his application for a hearing at the Committee for the Remuneration of Auxiliary Personnel came to nothing.

Reb, I think the ‘let’s not take anything seriously’ person who wrote this is closer to me than the one you mention.

Umberto, I’m glad you liked it because I only remembered and resurrected it after reading your own ‘Interview with the Elf Himself’. Bracketing me with Perelman, however, calls for a significant suspension of disbelief. (But I think I’ll manage it.)

Thanks, everyone, and Happy holidays to you and all AE friends.

Enid Richemont said…
Check out author Philip Ardagh's recent encounter with Father Christmas, on Facebook (he did elf training, too). Think you need to set up an Union. PA seems to have no problems beard-wise, though.
9 December 2017 at 19:06