Last posting days? Reports of the death of the Christmas card are premature according to Ali Bacon

By AliB - December 22, 2017
Remember how books ‘as we know them’ were on their way out? I seem to remember a few years ago the same kind of prediction was going on around Christmas cards: rising postage, conservation, e-alternatives and a multi-faith society made it look like the white bendy things were heading for oblivion and I think that was a reasonable prediction. I culled my list, signed up for an e-card service and found old friends turning up in my inbox rather than on my door-mat. I can’t deny a pang of conscience for however many thousands of jobs relied on their production and design and the possible loss to charity coffers (how many of us make that donation we really mean to?) but that was balanced out by the feel-good factor of thrift and eco-friendliness. 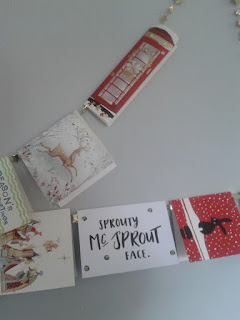 Well here we are a few years on and I glimpse a small revival of the robin and reindeer cheeriness. Cost of postage it has to be said is a factor and I’m surprised (in a good way) that my children are now asking for addresses of cousins and aunts to send cards to those we would have met up with when they were younger. As for our current collection, it may not be huge but it’s more varied than ever before, encompassing everything from bijoux to bland to downright bolshie.  And if Mr McSproutface isn’t to everyone’s taste, it’s part of a hand-written limited edition. What can be better than that? At a local Christmas craft market I noticed similarly bespoke cards - from minimalist to downright mad - were changing hands in numbers for £2 a time. A far cry from haggling over the cost of a packet of 10.

So are Christmas cards on the up? I think not exactly, but maybe there is a change of direction. There has always been an argument about whether cards are for people you see all the time and want to share a greeting with, or those whom you never contact except at Christmas. I think my list is swinging to the former. While my list of ‘only Christmas’  is getting shorter (because there is always e-mail) I have given cards with pleasure to those who are ‘closer’, whether they are near or far geographically. Which ties in I suppose with the idea of fewer cards but in some case a bigger spend. I hope this also makes me okay with the trees and artisan card-makers.

Finally, amongst the usual Santa suspects, here is a little gem from a bygone age which was sent to me through the post from a collector friend.  I don’t know its exact origins but it is small, perfectly formed and has a rhyme which I have decided to make my Christmas message to the world this year. 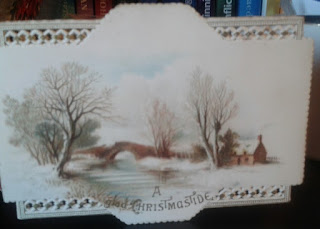 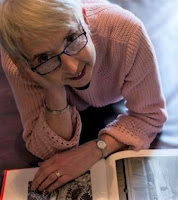 In the Blink of an Eye will be published in Spring 2018 by Linen Press. https://alibacon.com
Ali Bacon Authors Electric Blog christmas Christmas Cards Victorian Christmas

Fran B said…
I’m about to embark on a new novel set in Edinburgh, partly in the 1900s. Can you recommend any good research sources! I definitely want to buy and read your book when it comes out. Let me know. My email is franbbrady@aol.co.uk. Thanks and good luck with the launch!
22 December 2017 at 18:46