The Writing Bobble by Fran Brady


I was at a funeral a few weeks ago and the widow bravely did the eulogy. She kept it poignantly succinct, with just the right sprinkle of humour to remind us what a lovely, jolly man he was.

One thing she said has really stuck with me. His name was Robert, known always as Bob. Or, said she, as 'Bobble'.

When we all looked a little puzzled, she explained: he was very clever and resourceful, able to turn his hand to any job that was thrown at him. Hence, whenever something needed mended, cleaned, thrown out, replaced, installed, improved, fiddled with, climbed up to, wriggled down to or renovated, the family wouldn't hesitate. "Bob'll do it,' they would say. Indeed he would - and did, all his life.

It occurred to me this week that I may be becoming the Writing Bobble in my own family. Everything from tricky government forms to tarted-up CVs; from bereavement consolation letters to beefed-up, stand-out Uni applications; from parodies for parties to scripts for pantos; from formal presentations to bedside stories. I comply as often as I can (i.e. always). It's sort of flattering, I suppose, if time-consuming.

This week, found me venturing into the world of the business blog. As we writers know so well, it is not enough just to have a cheery photo on our dust jackets (or paperback/e-book equivalent). We needs must: 1) create and maintain a public persona; 2) invite our readers to join an elite club, of which this invented persona is the doyen/doyenne 3) invent a culture and language for this club; 4) - very important - develop a whole catalogue of in-jokes and references (this will create a seductive sense of exclusivity).

So ... when my (19-year-old) entrepreneurial grandson's new admin assistant sent me her first attempt at a blog for his two-year-old, thriving, car-valeting business, I found myself explaining these four unalienable truths to her. Her first attempt at a title was something along the lines of 'Winter: get it on' or 'Get Ready for Winter.'

Useless, I callously told her (but kindly). Your title is very important. It needs to draw the customers in, hint at what it might be about, play on ambiguity but without confusing them. I gave her two examples:
My first novel - how naive was I? - was called "The Ball Game', because it centres around a formal ball at a university. Not only are there two other books called that (no, I didn't check!) but lots of people thought it would be about football. Ambiguity fail: Nul points, Fran. My fourth novel is called "The Ghost of Erraid'. In fact, it is not really a ghost story, much more a suspense psychological thriller, based on a legend. However, it has drawn interest from readers of the paranormal genre as well as my usual demographic. It's fine: their money is just as good! Ambiguity success: dix-neuf points, Fran.

As her blog is about taking care of your car in winter (including regular valeting, obviously), I suggested she call it 'Are you Ready for Love ?' or 'Baby, it's Cold Outside'; and then develop the idea of TLC for your car. She went for the latter title; so, I then suggested a graphic of a wee shivering or snow-laden car. When she took me up on this idea I further recommended she give the car a name, make it the company mascot and feature it regularly in future blogs. It can have adventures and develop a character all of its own ... maybe badges, fridge magnets, etc. She's totally up for it. 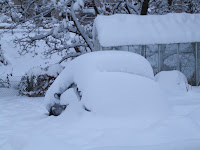 It is to be called 'Ophelia'. Why? Because I sent her a photo of the car I had in 2010, the year of the big freeze in Scotland, to give her the idea. It was a sporty little number, called 'Ophelia' (because her number plate was OPH). The photo I sent was labeled 'Ophelia under snow'. Join the dots.

I've never met Admin Assistant (name withheld to protect the innocent) but I feel we are pals. Or, at least, I feel that she feels we are pals. Another satisfied customer for Writing Bobble.

And I'm rather pleased that Ophelia will now live again. 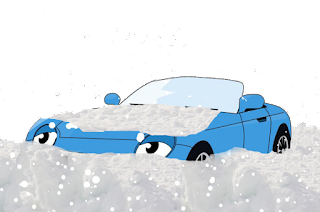 Here is her reincarnation.


You can see this brand new blog at:
http//:www.freshcarvaleting.com/blog

And, of course, if you live in the central belt of Scotland and your unloved car is looking reproachfully at you ...

Chris Longmuir said…
Great post, I really enjoyed it and, as we are talking about titles here, the thing missing from yours is your name! I loved it though.
2 December 2017 at 08:05

Fran B said…
Can’t believe I forgot to put my name! Blame the liqueur chocking was eating while writing it. It’s Fran Brady - commonly known as the daftie.
2 December 2017 at 10:59

Fran B said…
'the liqueur chocking was eating' -eh? Don't you just love autocorrect? That should be - can you guess? - 'liqueur chocs I was eating'. Still, fantasy writers among you might like to consider what kind of fantastic beast a 'Liqueur Chocking' could be ...

Dipika Mukherjee said…
Very interesting post, thanks for this!
3 December 2017 at 05:36