May 2018 be a good one for you, folks! Peace, love, joy and creativity in ample measures! Here are some early daffodils to lift your spirits. 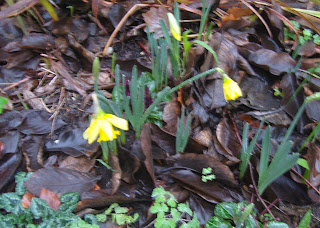 So far, 2018 hasn’t really lifted my own spirits. I can only hope it will get better. I’d had a burst of energy towards the end of 2017 and had sent out several poems and short stories and a children’s novel, mostly in response to call-outs and competitions. The rejections/non-acceptances came in thick and fast with the new year. There was one really nice one – just about the nicest rejection I’ve ever had, from an agent: ‘Thank you for giving me the opportunity to consider your work. This was a difficult decision as I was really impressed with your submission. The writing is engaging, the idea is appealing and you write with real energy and imagination. However, while there was a lot I enjoyed about your submission, ultimately I did not feel convinced I could find a publisher for it.’ She went on to say she’d be keen to read anything I write in the future. So far, so not too bad – but as for all the rest, silence or shortlists on which my name was not. How to deal with it all?

Once, years ago, I won a prize for best writing for television. There was a nice cheque and the promise of the script being read by a TV producer. I waited. Waited. Waited and then sent out a tentative enquiry, which resulted in an invitation to go to the studio for a meeting. Yay! BAFTAs here I come! When I got there, the script was produced very mangled and covered in coffee-cup stains and general uggle. ‘So sorry,’ said the Producer, ‘it had fallen down the back of the desk, hence the delay – we didn’t find it until we got your enquiry.’

There were encouraging comments but it didn’t get produced because it didn’t fit their needs – too short for a one-off. What it did was make me twitch every time I sent work anywhere and didn’t hear anything. It must have fallen down the back of the desk! This is not a rejection, they’ve simply lost it...haven’t they? Or, nowadays, they’ve deleted the email by mistake. Nobody has read it, or they’d have taken it up. Obviously. Such little delusions don’t last long, though. I’m not in the habit of embarrassing myself by phoning to ask if they, whoever they are, actually received my work and actually read it. I allow myself the wild thought and then let it go. Nobody else needs to know what goes on inside my fevered head.

Other private thoughts include: Bastards! They’ve got something against me! Jobs for the in-crowd! What’s the matter with them – are they stupid, or what? I indulge one or the others of these for a while and then let them pass. If there’s a list of the successful work, I’ll look at it. I’m usually humbled. Yes, I see why those works were chosen and mine fell short. Occasionally – very occasionally – I’m indignant, especially if it’s poetry aimed at children. There’s a lot of poor stuff out there. Short stories are another minefield. Often, I just don’t get it. I have to face it, it’s not my métier, but that doesn’t seem to stop me trying! Daft, isn’t it? Why keep trying, only to fail? Because the alternative is unthinkable, that’s why.

James Fenton takes a good look at failure in ‘The Strength of Poetry’. ‘It’s not enough to fail,’ says Fenton, ‘You have to come to feel your failure, to live it through, to turn it over in your hand, like a stone with strange markings. You have to wake up in the night and hear it whistling around the roof, or chomping in the field below, like some loyal horse – my failure, my very own failure...And the horse looks up at you in the moonlight and you feel its melancholy reproach. ..why are you neglecting your failure?’ 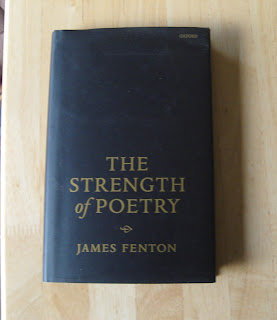 Fenton goes on to say that ’Many people live in such horror of failure that they can never embark on any great enterprise...this is the worst kind of failure because there is truly no way out... In the end, nothing is achieved by this timidity. Or you can permit yourself one failure in life and devote your remaining days to mourning...This failure, it would seem, has been kept like a trophy, lovingly polished and always on display. But for a productive life, and a happy one, each failure must be felt and worked through. It must form part of the dynamic of your creativity.’

Wise words indeed. Now, how to implement them?

*The writing on the wall at Belshazzar's feast: you have been weighed in the balance and found wanting

Susan Price said…
What a wonderful quote that is from James Fenton. I've never heard of him -- thank you for educating me, Sandra, and for a great post.
20 January 2018 at 11:19

Lynne Garner said…
Great post and been down the same road you have. I had so many rejections and non-replies in 2016 that I gave up sending any out during 2017. However, I have a coupe of new ideas which I'm working on and this time I won't let the so-and-so get me down. I've gotten off the slush pile before and I know I can do it again.

Katherine Roberts said…
Sandra, I've just been reading Psychologies magazine, which claims there are only three ways you can fail:

julia jones said…
yup - I irritate my family with the maxin - if you don't try, you don't fail. they are expected to understanding that trying is the thing that matters. (not much comfort of course)

Dipika Mukherjee said…
Thank you for this post. My 2018 also began with numerous rejections and not a single acceptance and I've been wallowing is the slough of despond so to speak until this post gave me a good kick in the backside.
22 January 2018 at 10:35

Fran B said…
I got so bruised by rejections about four years ago, after trying with three novels for about five years, that I gave up sending stuff out and embraced the Indy world. Big marketing efforts last year did produce better recognition and reviews for my fourth novel. This has restored my confidence a little. I’ve just started writing my fifth novel and maybe, by the time it’s ready, I’ll be feeling strong enough to try it out on agents and publishers . . . Or maybe my Indy marketing and image will have improved enough to make that not necessary. Or maybe, I’ll just throw all my principles and writing self-worth out and write ‘Sixty Shades of Tartan’ (Scottish take on the world of kinky sex ...).
22 January 2018 at 11:46