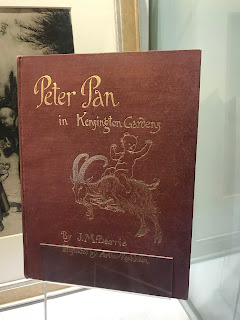 Being a writer is wonderful, busy, scary, action packed, interesting and can take you to the ends of the earth and all sorts of strange places. Wherever a writer goes they find inspiration and ideas for their writing. This is certainly true in my case. I find that possible body dumps just leap out at me wherever I go.

However, this past week, there weren't many body dumps in sight. Some body parts did appear but that's a whole different story, as the saying goes. One for another blog.

For the past week I have been in London with my nieces, on a holiday rather than for work. However, it's tough to turn my crime writer's brain off. There's always an opportunity to think about a possible plot or storyline. Especially when the young ones want to got to Ripley's Believe it or Not, and Madam Tussauds. Ripley's has a chamber of horrors. As you can imagine this is fertile ground for anyone dealing with dead bodies in a book. That covers most crime writers. I have to say that medieval torturers were a gruesome lot. They make modern day crime writers look like a bunch of fairies. I suppose they had to think of something to do when there was nothing on the telly.

Ripley's is fascinating, esoteric and also somewhat random. I don't see what is strange about an original copy of Peter Pan, or an uncorrected proof of one of Agatha Christie's books. However, they are there for all to see. Being in the presence of such literary greats made me sit down and write a bit of the next DI Shona McKenzie Mystery. Yes, you've got it. Book seven. JM Barrie, the legendary author of Peter Pan, is from Kirriemuir, which is near where I live in Scotland. Agatha Christie is possibly the most legendary crime writer of all time. That day I felt like I was a part of history. It made me want to write more. The picture below is living proof that writers are always writing. I whipped out my phone, cracked open Evernote, and there it was ready to copy and paste into the manuscript when I got to my laptop.

I'm not sure my nieces were entirely impressed. They wanted to carry on looking at the exhibition. And look we did. Ripley's is brimming over with inspiration for writers. Nearly every exhibit could be used somewhere in a book. 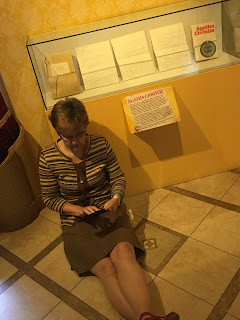 I would like to leave with a question. What inspires you to write? What makes you want to put one finger in front of the other on a keyboard, or to pick up a pen or pencil? Inspiration is everywhere, if you only just look.

Wendy H. Jones is the award winning author author of the best selling DI Shona McKenzie Mystery series of crime novels set in Dundee. Killer's Crew, the fifth booking the series was released in November, 2016 and won the Books Go Social Book of the Year 2017. Dagger's Curse, the first book in her Fergus and Flora, Young Adult Mystery series was released on 10th September, 2016 and is currently shortlisted for the Woman Alive Readers Choice Award 2017. She also has one non fiction book, Power Packed Book Marketing: Sell More Books.

AliB said…
Sounds like a great trip Wendy. I don't think I knew JMB was from Kirkcaldy. Hard to say what inspires me by the way. I think just spotting a story that needs to be told. Ali
16 July 2017 at 10:04

Wendy H. Jones said…
It was a great trip. I agree about spotting a story that needs to be told. That happens all the time

Unknown said…
What often happens in my case is that I'll think subconsciously about a concept for several days without being able to verbalise it fully.

Once those words are out there, the rest of the story or poem usually follows quickly.

Wendy H. Jones said…
Love the idea of snippets causing a miasma in the mind that then emerge fully fledged. Ripley's is a top place for all sorts of writing.
16 July 2017 at 15:48

glitter noir said…
Evernote...? I've heard that name/word before. Sounds like something I really must try. And thanks for the terrific post.
16 July 2017 at 16:00

Fran B said…
J M Barrie hailed from Kirriemuir. Maybe that's what you meant. As a Dundonian myself, It feels like I've always known that but I had to check my facts as your post gave me pause for thought and I doubted myself for a moment.

Interesting post, I sometimes scribble on a train or bus, usually observation of or conjectures about fellow passengers, occasionally of some passing scene or incident in the streets, I never actually do anything with these scribbles as such but it flexes the old writing muscles and ideas burrow into my brain and come out when called and needed.

Ripley sounds fascinating - a bit like the old uni library in St Andrews where I used to sit and daydream down in 'The Stacks' (when I should have been studying). Something about being surrounded by books and famous writing legends. Like being in an old church where the very walls seem saturated in prayer: in 'bookie' places, the very air is always alive with words, scenes, plots, characters . . .

Have you been to the Writers Museum in Edinburgh? I spent several happy afternoons there while reseaching my latest novel. If not, come through and we could have a day out together in the Royal Mille doing writery things.
17 July 2017 at 09:19

Wendy H. Jones said…
Thank you, Fran. I did mean Kirriemuir. I was writing this in a train and my brain wasn't functioning on all four cylinders. I Have been to the Writers museum but I'm always up for a visit to Auld Reekie and The Royal Mile. Especially it involves writerly things
18 July 2017 at 23:16