The Foggy, Boggy Land of Funk by Fran Brady

By Fran B - July 02, 2017
When actors are not acting, they are 'resting'. In fact, they are probably working harder than ever, earning a crust in some low-paid job whilst trying to chase after as many acting opps as possible. And the longer they are 'resting', the harder it becomes for them to believe in themselves as actors. There probably comes upon them a growing, insidious fear that they will not actually be able to do it again - to get out there and produce the goods.

So it is for us writers, especially novelists. We have, perforce, to spend time and energy on the editing/re-writing/publishing stage; then even more time/energy on the publicity/marketing stage. It can take months and months, even years. All our creative juices are being used up in blogging, facebooking, twittering, etc to bolster our 'internet platform; our time is used up travelling to events and likely outlet places; if our marketing efforts bear fruit, still more time goes on signings and talking to book groups/festivals/ etc. It sure bears no relation to 'resting' but neither does it permit us time or headroom to do what we do best: write original, creative material.

Like those out-of-work actors, we can begin to lose sight of ourselves as authors and we can enter into the Land of Self-Doubt where there is forever a drought of confidence and a famine of motivation. I remember hearing a really well-known, prolific author talking at a book-festival writers' seminar and describing this very thing. He really thought that he was looking forward to getting down to his next novel; he had ideas, the genesis of a plot and characters were coming to life in his head. But, when the day came that he had allotted to get started, he found himself latching onto other tasks that he told himself were a priority. He made us laugh as he described some of these 'important', diversionary activities: oiling the mower blades (very slowly); cleaning the windows of the garage (who ever does that); colour coding the paper clips in his desk drawer; grooming the cat with a fine tooth comb ; and so. . . . 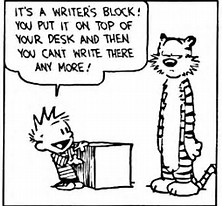 In other words, he was gripped with a bad case of what the boarding-school novels I binged on as a child called 'funk'. I'm happy to report - as, indeed, was he - that he did eventually overcome his funk and tentatively begin to write. Like a trooper, he stuck to it until gradually the old facility emerged and the absorption of creating a new world of characters and events sucked him in. He told us of bursting out of his study on Day Four, shouting: "I CAN still do it! I CAN!'

He made it an amusing story for purposes of the bookfest audience, but it was easy to see what a real and pretty frightening experience it had been for him. I am thinking of him now as I reach the midpoint in my self-imposed year of not writing a novel. It's the first time in ten years that I have not been in the midst of writing one but I decided at the beginning of this year, that I needed to expend more energy and time on marketing the four novels I have written so far. It has felt like a severe deprivation. I am still engaged in several writing-related activities - editing a quarterly magazine, running a writing group, writing a monthly column for another magazine, collating a reminiscences project, writing stories for my little god-daughter, etc - not to mention the aforesaid treading of the internet boards. All of these keep my writing muscles exercised but they do not give me the deep, sensual, absorbing, exciting pleasure that writing a novel does.  And I miss it like mad. I'm longing to get back to it. Roll on, January 1st, 2018!

But what if I can't do it any more? What if, like that funny, honest bookfest writer, I descend into the foggy, boggy land of FUNK? I can only hope that I too will have a Day-Four Epiphany and escape from its clutches with my own glad cry of: "I CAN still do it!'

Wendy H. Jones said…
My house is never cleaner than when I am meant to be writing or editing. Very well said. Now where's that lawnmower. Oh, blast. I haven't got one
2 July 2017 at 09:12

Bill Kirton said…
I often use your actor/writer parallel. There are even more aspects of their trade that we share, not least 'becoming' our characters as their story unfolds, engaging personally in BOTH sides of the dialogue we're writing, losing an awareness of our self when we overcome the funk and the words are flowing.
By the way, I admire your dedication. I'm so hopeless at the marketing and stuff that I could never make the choice you made.
2 July 2017 at 11:29

Umberto Tosi said…
I keep telling myself, you're not the only writer to ever descend into Funkville. Look around. There they are! And there are exit signs. Thank you for the reminder, and the encouraging words. I do often wonder, however, why there are high-speed elevators to take me down to Funkville, but only long flights to stairs available upwards.
2 July 2017 at 19:51