The Lure of History - Cecilia Peartree

By Cecilia Peartree - July 05, 2017
I vaguely remember a time, itself now quite a lot of years in the past, when I briefly considered the idea of taking up history as a career. It was soon after I had acquired a degree in the subject, and I couldn’t imagine taking much interest in anything else, although neither could I identify many realistic career opportunities for a history graduate. I did attempt to become a history teacher just after that, but fortunately I realised in time that trying to teach history to teenagers would involve quite a bit of crowd control and not very much actual history. So, after a few desultory attempts to get a job at the Imperial War Museum – I had specialised in modern European history – I went into computer programming instead. You could do that in those days.

Even after all this time there is something that lures me back to history. This is the same siren call that makes me spend hours in a fruitless quest for ancestors who are lost in the mists of time and who, if I could ask their opinions, would probably prefer to stay lost. It’s the same urge that causes me to write fiction set in the past even although many of my readers wish I wouldn’t bother. And above all, it’s what makes me spend far longer on research than I need to when preparing to write these unwanted stories.

There’s something tantalising about historical research. No matter how much of it you do, it’s never enough. And yet in the context of writing fiction, it can still be too much.

Most fiction readers don’t want to plough through absolutely everything you’ve learned about the administration of the Festival of Britain, the history of the Communist Party in Berlin in the 1940s and 1950s, or exactly how Brighton Pavilion was constructed, to name but a few of the topics I’ve looked at recently. On the other hand, even if you’ve studied these things from every possible angle and scrutinised every available source, online and offline, there’s always something missing. It’s usually some small prosaic detail that turns out to be pivotal to the plot of your novel. Whether the door to the Mathematical Laboratory at Cambridge opened inwards or outwards, for instance, or the opening hours for exhibitions around the Funkturm in Berlin in 1954, or what people wore when travelling on the Brighton to Dieppe packet boat in the 1800s.

I don’t stress as much over this kind of thing as I did when I first wrote a piece of historical fiction, but at the same time I still have an aversion to writing something completely inaccurate. So if I really can’t find out what I need to know, I either leave it out and circumvent that part of the story somehow, or I make my best guess at the truth based on what I do know, and soldier on. 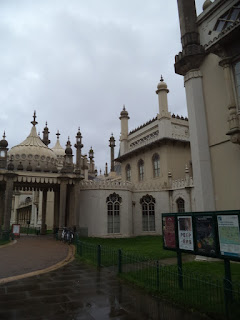 I don’t think a ‘real’ historian would choose the latter option, but this is fiction, after all, and because I’m the kind of person who likes to take an overview and not get bogged down in too many details, I feel that the context and atmosphere conveyed in the book are actually more vital than the minutiae. In many cases I find it’s best to keep on writing anyway, and if necessary to spend a bit more time on research once the first draft is complete. So in July I will be trying to get to the end of my unfinished novel set in Brighton in 1814 – 1815, and only after I’ve finished the first draft will I allow myself to go to Brighton and fill in the gaps. Which will be a real treat in itself, I must admit.

This is in contrast to my methodology when I wrote my first historical novel, an epic of the English Civil War now lost somewhere in the garden shed. I must have spent a couple of years researching, and about a year writing it, and the finished thing contained whole chapters of exquisitely researched domestic trivia and very little about the conflict itself. Occasionally I wonder if I should excavate it from the shed and read it to see if it’s as bad as it seemed, but fortunately there’s a pile of hamster cages in the way and I don’t want to disturb them in case they’ve been colonised by spiders.


That’s a case where it’s probably better to leave the past undisturbed and to tell myself I’ve moved on since then.
Authors Electric Blog Brighton Cecilia Peartree history Modern European History research for writers

Chris Longmuir said…
This struck a real chord with me Cecilia. I find that when I do get criticism it's usually about the bit where the facts are actually a true representation rather than the fudged bits. Like the guy who wrote to me saying the British Government would never allow Irish men to work in munitions factories in 1917 (this was the year after the Easter Rising against the British in Ireland) when the facts are that the Gretna Munitions factory was built largely using Irish navvies! That's where my book is set. I don't suppose we will ever win.
5 July 2017 at 10:07

Rowena House said…
Another big chord struck here! A passion about the period is both absolutely essential and an albatross. Some sort of fudge to fill in the gaps the only way out, I can see too. Hope the spiders aren't the only ones to enjoy your research.
5 July 2017 at 10:45

Fran B said…
I enjoyed the research phase of my last novel (set in 1920s, centred around a lighthouse keeper's family) so much I had to drag myself out of it and get on with writing the book!
5 July 2017 at 21:48