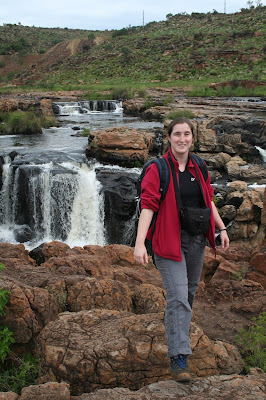 As I was growing up in middle-of-nowhere western Sweden, I was often told the following story by both my grandmother and my mother:

It was 3 o’clock in the morning and my grandparents were fast asleep. The phone rang and my grandmother got up to answer. At the end of the line was a young journalist, who rather bluntly asked if my grandmother was aware that her youngest daughter was trapped on a small cliff ledge in the high mountains of Lapland, presumed to be seriously injured. Would my grandmother care to make a comment for his newspaper? This was the first my grandparents heard about my mother’s accident, while she was away working in the far north of Sweden.

Needless to say, I grew up thinking that all journalists were the most insensitive bastards around (and some would still argue I had a point, although I’ve come to appreciate the danger of tarring everyone with the same brush). My mother, who did survive that scary accident, was pretty much of the same opinion. “Journalism” as a profession was right out and “writer” seemed way too posh to me, hailing as I did from a long line of farmers from rural Sweden, none of whom had ever gone to university. Add to that a dose of inherited dyslexia from my father and a career as a writer ought to have proven downright impossible. Only thing was, I loved to write. As a child and well into my teens, I was always inventing stories. At first for the sheer joy of it, later on to escape an increasing harsh environment of bullying at school and frequent moves to different parts of the country with my parents.

Given my early prejudice against the writing professions, not to mention a fear that I couldn’t possibly succeed, unsurprisingly in my first career, I focused on my other passion – travel. I left Sweden pretty much as soon as I could, in my late teens and after stints in Holland and Mexico, London became my base. Focusing on a career in the travel industry, it wasn’t that long before I “succeeded”. Succeeded in getting myself a desk job where I was sending other people to exotic locations, that is. Boredom flourished. Until one day…

Fast-forward some 10-15 years, by which time I’d reached the “high age” of 35 and I was in a rut. Not only was I holding down one job, but two – one office-based and another from home as a translator, both officially full-time. What can I say? It was a nightmare. I was working all hours, without necessarily enjoying it. My writing ambitions were buried somewhere in a suitcase atop a wardrobe, or possibly under the great piles of translation work I wasn’t particularly good at, on my desk. Something had to give.

After six months of overwork, I realised I couldn’t keep up the double shifts much longer and decided, not without a hint of fear, to give up the more secure office job and focus on translation, as working from home with a freer schedule very much appealed to me. A tad optimistic, given that I was an appalling translator! Sure enough, a few months down the line my yearly contract was not renewed and I went from two jobs to no job, in no time.

As fate would have it, with hindsight, this was the best thing that could have happened to me at that point, as it forced me to evaluate what I really wanted to do and what really inspired me. I had an upcoming holiday to Cuba booked and despite having no job to return to, I decided to take the holiday anyway. Cuba was a true inspiration, I loved it. When I met an editor launching a new travel magazine shortly after my return I asked, on the spur of the moment, if he might want a feature on Cuba. He enthusiastically said yes, much to my amazement, and did not seem to mind that I hadn’t been published before.

It’s hard to describe the feeling of sheer joy seeing that first feature in print, spread over several pages with my own images included (threatening the magazine with court action to finally get paid was less joyful, but that’s a different story). If I’d needed proof I could write and get published, this was the boost of confidence I’d needed. Thus began a decade-long career in travel writing and before long I was even describing myself as a “travel journalist” – a bit fickle, that – and finally, when the book contracts started coming in, as a “travel writer”.

It was a career in superlatives, where the weird and whacky, the awesome and amazing, kept regularly cropping up. Not just the journeys themselves to anywhere from Tierra del Fuego to Taiwan, with a dash of Wales and Washington in-between, but the mix of people, experiences, food and drink. One week I might be trying my hand at husky-mushing in Finnish Lapland and another I’d be enjoying a safari in a South African game park. The money was pretty crap and the schedule quite hectic, but it was a very addictive lifestyle, and, I came to appreciate, the envy of many.

It took me years to see through the system I was part of and want to rebel against it. Travel writers (and writers in general of course) were earning less and less, but often we were offered the most lavish of press trips. A sort of bribe to ensure we would write nice things about a destination and not ask too many difficult questions, so the public would see the travel writer as the genuine side of the PR machine. It’s rather difficult to try and focus on the environmental policy of a place when you’re also being fed a 7-course dinner with matching wines. Some might pull off a more critical, investigative journalism approach, but most of us, often myself included, were just enjoying the hospitality. “Writing nice things is easier and gets you more work”, seemed to be the motto.

An exception to the above scenario was guidebook research, which I did my fair share of for some seven years. This proved far freer, as I was given a travel budget and remained in charge of my own schedule, rather than the organised programmes of press trips. The downside was obviously the lack of creative writing in terms of the finished product. Travel writing in any form, although often rewarding, is also hard work physically, in ways you might not think of at first. A decade in, it suddenly dawned on me just how much strain I was putting on my poor body – vaccines, malaria tablets, different time zones, climates, foods and drinks all take their toll after awhile.

Taking time out, after 90+ countries visited, something else hit this occasionally slow writer as well. What I’d always wanted was to write and travel, not to write about travel. The latter had been accidental. It had seemed so natural to combine my two main passions, but finally I had to accept that travel writing wasn’t my true calling, the stories I’d invented as a child were all fiction. For a long time fiction ideas had been brewing under the surface, but I’d been too busy travelling and making a living from my travel writing to allow these ideas to take centre stage. Gradually, some seven years after tentatively starting work on my first idea for a novel, I’ve begun winding down the travel writing completely, shifting my focus to fiction.

The power to invent new and different worlds is a very appealing prospect, especially looking at the state of the world today. Looking at historical photographs recently, I confess seeing women in wedding photos past looking unhappy, or even terrified, is making me quite willing to rewrite history as well as inventing new futures. I suspect there are many stories out there deserving of a different ending… After finishing two novels in the last year (one’s with a publisher, the other probably needs further “tinkering”), I’m embarking on a new project this summer. I’ll be following in my mother’s footsteps – hopefully not literally or there might be journalistic phone calls in the middle of the night – and will be spending some time in Lapland, looking to rewrite her story in a fictionalised biography. I may have taken the long way around, but no matter how many countries you visit, it’s hard to escape your calling.

What a fabulous post! As a nomadic writer myself, I wish you all the best!

Thanks for the lovely comments!
I've just settled in up in Lapland.